The domestic oil and natural gas development boom tied to the run on shale targets has led to some surprising results in the U.S. Census Bureau population estimates released on Thursday. According to the government agency, “numerous metropolitan statistical areas, micropolitan statistical areas and counties that were among the fastest-growing last year were located in, or at least near, the Great Plains and West Texas.” 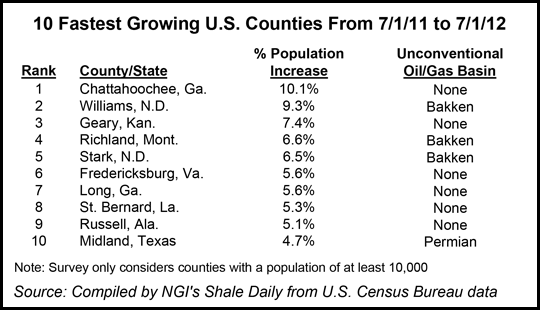 The U.S. Census Bureau revealed that Midland, TX, was the fastest-growing metro area over the July 1, 2011, to July 1, 2012, period, with its population increasing 4.6%. Adjacent Odessa, TX, ranked fifth overall, Austin-Round Rock, TX, was seventh, while two areas in Wyoming (Casper and Cheyenne), along with Manhattan, KS, and Bismarck, ND, were also among the 20 fastest-growing metropolitan areas.

“After a long period of out-migration, some parts of the Great Plains — from just south of the Canadian border all the way down to West Texas — are experiencing rapid population growth,” said Thomas Mesenbourg, the Census Bureau’s senior adviser performing the duties of director. “There are probably many factors fueling this growth on the prairie, but no doubt the energy boom is playing a role. For instance, the Permian Basin, located primarily in West Texas, and North Dakota accounted for almost half of the total U.S. growth in firms that mine or extract oil and gas, during a recent one-year period.”

As the Bakken Shale of North Dakota and the Eagle Ford Shale of South Texas have shown, the number of oil and gas wells go up long before there are enough homes for all the workers who flock to the energy patch for high-paying jobs (see Shale Daily, May 18, 2012). One recent Eagle Ford study hypothesized that over the next 14 years the region will see the creation of 7,913 transient and permanent rig-related jobs (see Shale Daily, July 11, 2012).

Micropolitan areas, which contain an urban cluster of between 10,000 and 49,999 people, followed a similar pattern, with those located in or near the Great Plains among the fastest-growing,” the Census Bureau said. Williston, ND, ranked first in growth (9.3%), followed by Junction City, KS; Dickinson, ND; and Andrews, TX. Three areas in western Oklahoma (Elk City, Weatherford and Woodward), as well as Gillette, WY, also made the top 20.

When looking at the areas with the largest numeric gains, those high on the list are mainly in the South and West, the study showed. The metropolitan areas of Dallas-Fort Worth, Houston, Los Angeles and New York each added more than 100,000 people over the July 1, 2011, to July 1, 2012 period. Meanwhile, Austin, TX, and Orlando, FL, were not only among the top 20 numeric gainers, but also among the top 20 in terms of rate of growth.

The Census Bureau said that in the coming months it will release 2012 estimates of the total population of cities and towns, as well as national, state and county population estimates by age, sex, race and Hispanic origin.