Combined unconventional and conventional natural gas production in Ohio nearly doubled from 86 Bcf in 2012 to 171 Bcf last year, an increase driven mainly by high-volume horizontal fracturing (fracking) in the Utica Shale, according to data released Wednesday by the Ohio Department of Natural Resources (ODNR). 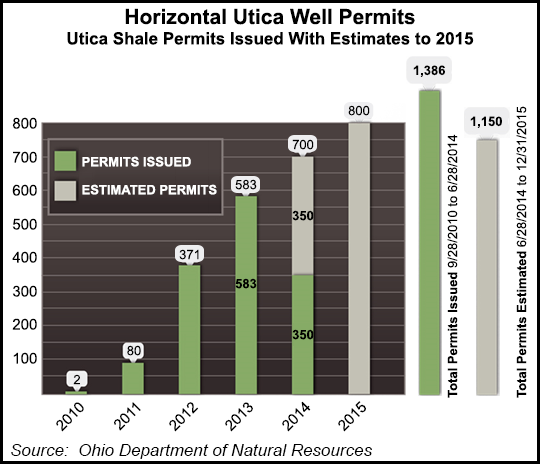 Three hundred and fifty-two horizontal Utica and Marcellus shale wells in the state reported more than 100 Bcf of natural gas production in 2013, up more than 600% from 2012 when only 85 wells reported 12.84 Bcf (see Shale Daily, May 17, 2013). Combined with conventional production, the year-over-year gas production increase in 2013 set a state record.

“Last year, I shared production data that showed Ohio is at the beginning of an unprecedented era of oil and gas production,” said ODNR Director James Zehringer. “Today, we have data showing history is being made as we speak. The increase in Ohio’s Utica Shale almost doubled Ohio’s natural gas output from 2012 to 2013, and that’s a first for Ohio.”

Zehringer’s remarks were delivered during a presentation that highlighted the impact of increasing Utica development in Ohio over the last two years.

“We’re seeing a fairly significant increase in oil production again. ONDR’s Richard Simmers, who helms the Division of Oil and Gas Resources Management. “It’s going up at a very high rate and it will continue to increase as other wells are drilled. The historic gas production will follow a similar trend.”

Limited oil production, though, has pointed to the play’s gassy composition. Several operators have increasingly switched their focus from a wet gas window in Eastern Ohio to counties farther southeast (see Shale Daily, Nov. 19, 2013); some have begun testing the Utica’s viability in West Virginia (see Shale Daily, May 16; March 26).

“Notable activity includes a drop in permits granted in Harrison County and an uptick in both Belmont and Monroe [counties],” said Wells Fargo Securities analysts of Ohio’s growth on Wednesday. “It’s still early in the play with industry still zeroing in on the core while optimizing completion techniques. But the uptick in permitting activity in Monroe and Belmont indicates, at least for now, that operators are chasing the dry gas window.”