Inflated by production from the nation’s burgeoning shale plays, total gross withdrawals of domestic natural gas jumped to 28.58 Tcf in 2011, a 6.5% increase from 26.84 Tcf in 2010, and are on pace to easily surpass those numbers again this year, according to the U.S. Energy Information Administration’s Monthly Energy Review for September. 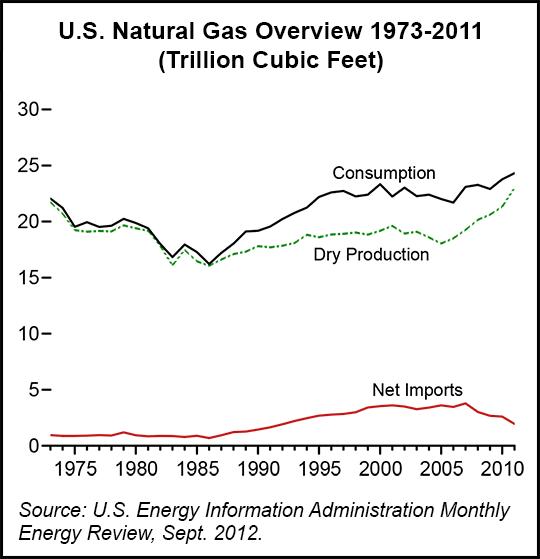 Gross withdrawals from the federal offshore Gulf of Mexico (GOM) during July were 4.06 Bcf/d, up slightly from 3.99 Bcf/d in June, EIA said in its Monthly Natural Gas Production Report. The June number was revised downward from the 4 Bcf/d EIA had previously reported. Production in Louisiana (8.50 Bcf/d, compared with 8.49 Bcf/d in June) and Texas (22.13 Bcf/d, compared with 22.04 in June) was flat as well, according to EIA.

In late June Tropical Storm Debby caused the shut-in of up to 44.1% of daily oil production and 34.8% of daily gas production in the GOM, according to the U.S. Bureau of Safety and Environmental Enforcement.

“New Mexico had the largest percentage increase at 2.6% or 0.09 Bcf/d, which can be explained by new wells and completed maintenance,” EIA said.

Recently EIA said the nation set several new records for natural gas in 2011, including gross withdrawals, the number of producing wells, domestic consumption, exports and dry, marketed and onshore production (see Shale Daily, Sept. 28). And domestic natural gas production will be at an all-time high this year and is expected to break that record for a third consecutive year in 2013, thanks in large part to the nation’s booming shale plays, according to EIA (see Shale Daily, Sept. 12).