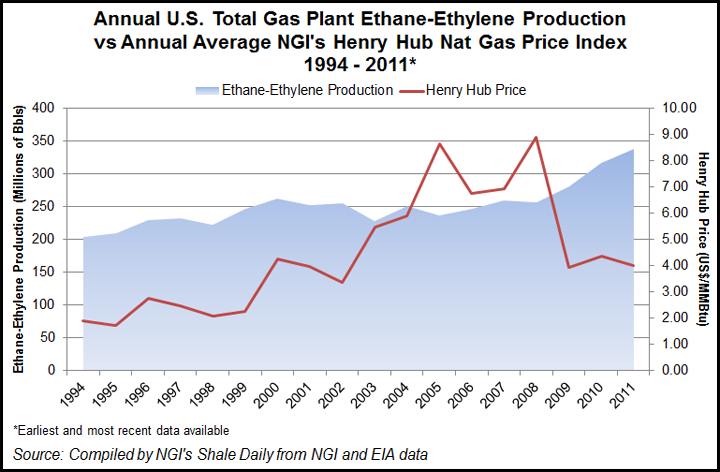 “Westlake had an excellent 2012, and I’m optimistic that abundant supply of ethane from North American shale gas and oil production will continue to give our business a significant cost advantage over global naphtha-based ethylene producers,” Chao said. “The billions of dollars in capital being invested in North America to produce, fractionate and transport the natural gas liquids production from shale gas and oil properties has fundamentally shifted the cost structure of North American capital industry and ensures that the shale gas advantage should benefit North American light ethylene crackers such as Westlake for years to come.”

The company’s Olefins segment reported net income of $143.2 million in 4Q2012, compared with $75.9 million in 4Q2011, and delivered its best year ever in 2012 with income of $552.8 million, compared with $459.3 in 2011. “Margins improved as a result of significantly lower feedstock and energy costs, which were only partially offset by lower sales prices,” the company said. Results in 2011 were negatively impacted by an unscheduled outage at a Westlake ethylene unit in Lake Charles, LA, and a fire at a third party storage facility at Mont Belvieu, TX.

The North American chemical industry can’t consume ethane as fast as shale plays are producing it, according to Chao, and ethane feedstock prices tumbled 67% between 4Q2011 and 4Q2012.

“These lower cost feedstocks have reestablished the North American chemical industry’s cost position globally, and have prompted a resurgence in debottlenecking and other special projects to capitalize on this advantageous position,” he said.

Westlake expects to capture additional benefits from the abundant supply of natural gas and ethane this year by completing an expansion of one of its Lake Charles, LA, ethylene crackers in the first quarter and starting other projects later this year.

In September, Westlake announced a series of growth plans for its Calvert City, KY, facility, including expansions of an ethylene unit by 40% from 450 million pounds to 630 million pounds per year, the conversion of the unit from propane to ethane feedstock and expansion of a polyvinyl chloride facility by 200 million pounds a year.

Annual U.S. ethane-ethylene production, which was as low as 256.7 million bbl just five years ago, climbed steadily to 337.9 million bbl in 2011, according to Energy Information Administration and NGI’s Shale Daily data. Over that same period, Henry Hub natural gas prices fell from 8.90/MMBtu in 2008 to $4.01/MMBtu in 2011.

Low-priced NGLs are helping the domestic chemicals industry to produce derivative products at less cost, and those products in turn ultimately become raw materials for multiple manufacturing sectors, according to PwC US (see Shale Daily, Oct. 10, 2012). The positive impacts could flow through the value chain into other manufacturing sectors, PwC US said. The U.S. chemicals industry already has invested an estimated $15 billion in ethylene production, increasing capacity by one-third, according to PwC.

Dow Chemical Co. is planning a $1.7 billion ethylene facility in Freeport, TX (see Shale Daily, Dec. 13, 2012). Construction of the facility, which would have capacity to make 1.5 million tons of ethylene a year, is scheduled to begin in January 2014. South Africa’s Sasol Ltd. recently said it intends to build the second largest gas-to-liquids plant in the world in Westlake, LA, at a cost of up to $21 billion (see Shale Daily, Dec. 4, 2012).

Westlake on Monday declared a dividend of 18.75 cents/share payable March 15, its 34th successive quarterly dividend since completing its initial public offering in August 2004.