Royal Dutch Shell plc’s US$69.6 billion deal to acquire UK-based BG Group plc is predicated on deepwater exploration and production, and integrated global natural gas. Shales? Not so much. 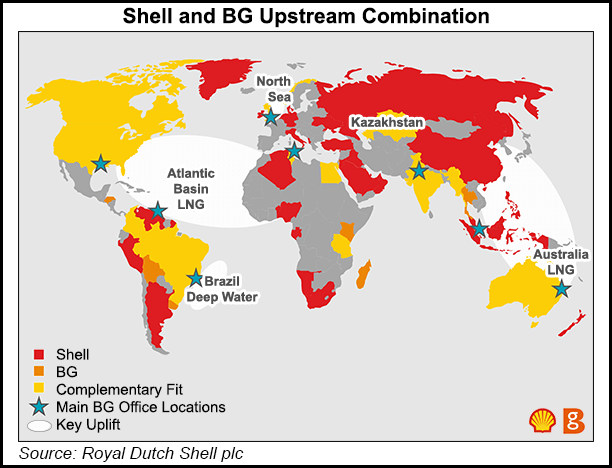 According to the company’s website, Shell holds about 1 million acres in Appalachia, much of it prospective for shale natural gas/liquids. BG Group is partnered with EXCO Resources Inc. to exploit shale gas opportunities in East Texas and North Louisiana, as well as in the Appalachian Basin, according to its website.

“We believe shale gas will be an increasingly important element of the U.S. supply and export mix,” BG Group says on the website. “These resources fit with our gas marketing activities and infrastructure.”

But in a 12-page transcript of executive comments on the deal, the word “shale” comes up only twice, and once is in the cautionary boilerplate.

“…BG brings…some gas production and potential in North America shales,” said Shell CEO Ben Van Beurden. The rest of the talk was about everything else. Analysts at Tudor, Pickering, Holt & Co. (TPH) noticed.

The deal “…is a conscious decision to de-emphasize U.S. shale and to stick to its strengths (deepwater, LNG),” TPH said. “It sets Shell apart from the other supermajors by ensuring long-term growth in upstream production but also in terms of LNG volumes. It gives Shell higher oil price gearing and makes it more of a bet on higher oil prices and higher LNG prices.”

The acquisition would grow Shell production by about 20% and give it positions in attractive oil and gas projects, particularly in Australian LNG and in Brazil’s deepwater in the Santos Basin, Shell said.

“This transaction fits with our strategy and our read on the industry landscape around us,” said Van Beurden. “BG will accelerate Shell’s financial growth strategy, particularly in deepwater and liquefied natural gas: two of Shell’s growth priorities and areas where the company is already one of the industry leaders. Furthermore, the addition of BG’s competitive natural gas positions makes strategic sense, ahead of the long-term growth in demand we see for this cleaner-burning fuel.”

LNG growth was “a primary motivator for the deal,” TPH said, adding that the addition of export capability at the Lake Charles, LA, import terminal is a particularly attractive low-cost option for liquefaction and export of U.S. gas. Earlier this year BG Group said it was pushing back the date for final investment decision on the project to next year (see Daily GPI, Feb. 3).

In comments to analysts during a conference call, BG Group Chairman Andrew Gould said the company last year shipped 178 cargoes of LNG amounting to 11 million tonnes. “We operate a flexible shipping portfolio, which alongside our own supply positions, allows us to respond to changes in market conditions and to provide a reliable and competitive supply to our customers.”

BG has sourced LNG from 15 countries and will be adding supplies from Cheniere Energy Inc.’s Sabine Pass terminal in Louisiana early next year, Gould said. “As the market expands, we are assessing further supply options, including Lake Charles in the USA, Tanzania and Canada.”

The combined company would have equity liquefaction capacity worldwide of 33 million tonnes per annum (mtpa) and nine regasification terminals. In 2014 pro forma delivered volumes would have been 45 million tonnes.

“BG’s equity LNG production, including Trinidad & Tobago, where shell is already a partner, together with Queensland and Shell’s growth plans, will together add around 80% to Shell’s 2014 equity LNG capacity,” Van Beurden told analysts. “Both companies play an LNG aggregator role, whereby we buy third-party LNG, often from other joint venture partners, and trade this gas to a worldwide customer base. This is a scale business, and clearly there is potential to add more value here, as well as cost synergies from the combined shipping operations and trading platform.”

Overall, Shell has estimated pre-tax deal synergies to be worth about $2.5 billion per year and has “identified further significant opportunities.” Shell CFO Simon Henry said the combined company would embark on asset sales of about $30 billion from 2016 to 2018 at an average of $10 billion per year, but “likely more lumpy than that.

“We may also see some further divestments from Shell in 2015, although proceeds are likely to be small, due to weak market conditions for divestments currently. Asset sales would come from both the Shell and BG portfolios, and we plan to undertake a fundamental review here, with an opportunity to really drive a different portfolio and priorities in the enlarged group.”

Spending by the combined company next year is expected to be less than $40 billion, Henry said, and lower again in 2017.

In the tie-up, BG Group shareholders would receive a premium of about 52% to the 90-trading day volume-weighted price of their shares as of Tuesday. If the deal is finalized under current terms, BG shareholders would own about 19% of the combined company.

Some analysts commented that the premium was particularly rich, and a bet on rising oil prices. During a conference call, Shell executives said the tie-up is being driven by assets and not a particular oil price expectation. TPH said the offer was in line with its valuation of BG assuming Brent crude at $95/bbl long term.

A combination of Shell and BG Group has been rumored off and on for a long time. The companies’ announcement was seen by many as the potential icebreaker for the next wave of industry consolidation. ExxonMobil Corp. is seen as a potential buyer, as well as other supermajors, TPH noted.

“BG has a strong portfolio of operations, including growth assets in Australia and Brazil and a highly competitive LNG business, as well as an enviable track record of exploration success,” Gould said. “The BG board remains confident in BG’s long-term prospects under the leadership of [BG Group CEO] Helge Lund.

“Shell’s offer, however, allows us to accelerate and de-risk the delivery of this value. The structure of the offer will provide BG shareholders with an attractive premium and a substantial cash return as well as enabling them, if they wish, to participate in the benefits of the combination through the share component.”

The deal is expected to close early next year.