The domestic shale revolution was “unquestionably the single biggest factor” behind the nation’s overall energy security risk declining for a third consecutive year, and that decline is expected to continue, leading to the possibility that the nation could soon become energy self-sufficient, according to the U.S. Chamber of Commerce’s Institute for 21st Century Energy. 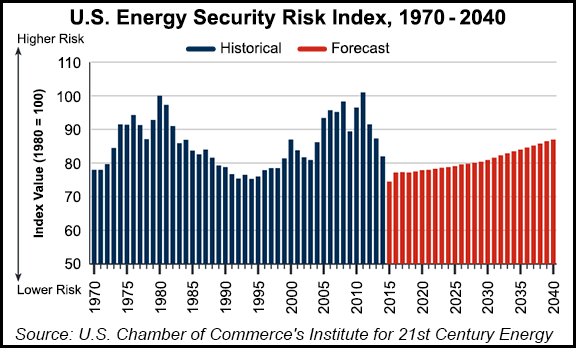 In an 89-page report released Wednesday, the institute added that the United States is expected to become a net exporter of natural gas by 2017 and is expected to continue expanding exports of refined petroleum products. The report is the 2015 edition of the Index of U.S. Energy Security Risk.

Institute CEO Karen Harbert said that despite Saudi Arabia’s attempt to grab market share during the current slump in global oil prices by maintaining a high level of oil production, “the current bear market is not likely to run U.S. oil producers off the field over the longer term.

“Indeed, the ability of U.S. producers to innovate and lower the price point at which production from shale formation remains profitable has been nothing short of spectacular, and it is why more than a year after prices began their plunge, U.S. oil production is, as of this writing, still above 9 million b/d.”

But Harbert warned that “heavy-handed regulation of hydraulic fracturing [fracking], which has been done safely for decades, threatens to raise costs unnecessarily at a time when producers already are facing daunting market conditions.”

The institute said the long-term outlook for the U.S. risk index is expected to decline through the mid-2020s before gradually rising year-over-year.

“As in 2012 and 2013, the unconventional oil and natural gas boom in the United States increased supply security, reduced net imports, and put downward pressure on energy costs and expenditures, all of which contributed to lower energy security risk,” the report said. “The growing impacts of increasing unconventional oil and natural gas production have been noted in previous years of the U.S. Index.”

“Since 2008, natural gas production has climbed 28%,” the report said. “Today, slightly more than 40% of U.S. gas production in 2014 was from shale formations. Pennsylvania’s Marcellus Shale, in particular, has made an extraordinary difference. In 2008, Pennsylvania produced about 1% of the total U.S. natural gas supply in contrast to 2014, when its roughly 3.3 Tcf of production accounted for 11% of domestic production, putting it second only to Texas.”

The institute said that based on the Energy Information Administration’s (EIA) Annual Energy Outlook 2015 (AEO2015) released last April (see Daily GPI, April 14, 2015), the U.S. Index is projected to average 80.7 points from 2015-2040, about a 7.4-point improvement over its Index projection last year, which was based upon AEO2014. Risks are expected to remain under the 2014 level through at least 2032, thanks primarily to increased U.S. oil and gas production.

“The rising risk trend late in the forecast period is being driven primarily by a projected 49% increase in the price of crude oil by 2040 (to $134/bbl), but much greater domestic production of oil and natural gas and energy efficiency mean that import expenditures for these fuels will be considerably lower in 2040 compared to last year’s 2040 estimate.”