U.S. dry natural gas production is forecast to continue growing “strongly” over the next two decades thanks to development of domestic shale resources, with the United States on track to become a net exporter of gas by next year, according to the latest projections from the Energy Information Administration (EIA). 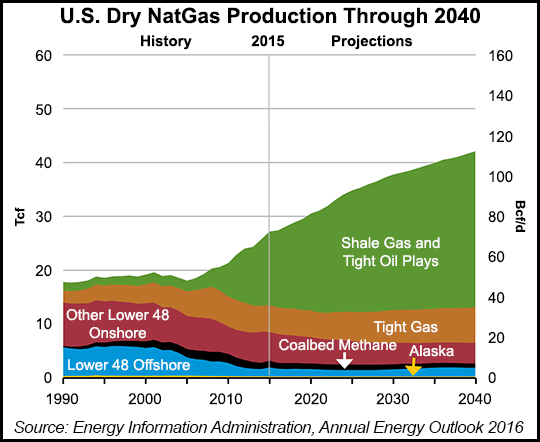 Speaking to an audience at the Johns Hopkins School of Advanced International Studies in Washington, DC, Tuesday, EIA Administrator Adam Sieminski shared some of the agency’s updated long-term energy forecasts as part of a rollout presentation for the soon-to-be-released Annual Energy Outlook 2016 (AEO2016) report.

“What we have on the natural gas side in these numbers is that we’re expecting production actually to continue fairly strongly over time. This is a little bit different than oil.” Depending on the resource case, oil production could remain “kind of flattish, maybe trending up,” Sieminski said. “Natural gas [is expected to continue] moving up strongly. Growth in natural gas production is driven by the continued development of shale gas resources, where the technology improvements result in higher rates of recovery and lower costs all across the projected period.”

With “consumption growing at a rate below domestic supply,” the United States will become a net exporter of natural gas sometime around the middle of 2017. “Between now and then, we will see not just exports of LNG — liquefied natural gas — but we’ll see more exports of pipeline gas to Mexico, and potentially a little bit less imports from Canada,” Sieminski said.

The growth of LNG exports figures to be influenced significantly by the price of oil, he said, with low oil prices reducing “the desirability of exporting natural gas from the United States.”

The Henry Hub spot price for natural gas varies widely under different scenarios relative to the reference case, according to EIA projections. A low oil and gas resource case — or where extraction technology does not improve as quickly — would put upward pressure on prices, approaching $8/MMBtu Henry Hub by 2030, compared to $4.50/MMBtu in the reference case or $3.50/MMBtu in a high oil and gas resource/technology case, Sieminski said.

As for crude oil, U.S. production is expected to rise above the historical high of 9.6 million b/d in 1970 before 2030, according to EIA’s projections. An increase in tight oil production, combined with higher fuel efficiency, is expected to contribute to a decline in imports from 24% of supply in 2015 to 19% of supply by 2040.

“Even in the very near term, there’s a wide spread in how we look at oil prices…If you use the current options prices, over the next year or so, what that says is oil prices could be anywhere between about $25/bbl and $80/bbl,” Sieminski said.

Though EIA always has an oil price forecast for its models, such projections should be taken with caution, he said. “You should be very, very careful, assuming those point forecasts are going to give you the right answer. There’s just a tremendous amount of volatility, and that’s true in the gas markets as well.”

Electricity generation and industrial demand are expected to pace domestic natural gas consumption growth during the forecast period, which extends through 2040. All demand sectors are expected to increase with the exception of residential, which is expected to remain flat, according to Sieminski.

“We are expecting to see more natural gas consumption” in the industrial sector, “especially for feedstock, where lower gas prices mean a lot more natural gas being used in the petrochemicals and fertilizers, as well as just general industrial output,” he said.

With exports to Mexico expected to grow through 2020 before flattening off under EIA’s reference case, Sieminski said a lot depends on “how successful Mexico is with the energy reform that’s underway…The Mexican government has undertaken a massive review and change in energy policy, including the ability for foreign capital…to invest in Mexico in things like production of oil and gas. Five years from now it’s very possible that production in Mexico will be coming up.

“…Despite lower oil prices, Mexican energy reform seems to be moving ahead, and the government seems to be very committed to doing that, and we’ve built some of that into our reference case.”

As for LNG, the growth potential “is less limited than what you can put across the border,” though some gas could be exported into Canada or Mexico and then shipped out through LNG terminals, Sieminski said. “The ability for LNG exports in the United States to grow is there. It’s going to depend a great deal on what happens to global oil prices.”

EIA factored the implementation of the Environmental Protection Agency’s Clean Power Plan (CPP) into its AEO2016 reference case. Under the CPP, the Obama administration’s landmark rule to limit carbon dioxide (CO2) emissions from power plants, both natural gas and renewable generation will surpass coal-fired generation by 2030. Only natural gas would surpass coal under a scenario without the CPP.

A reduction in energy intensity in U.S. consumption is expected to offset gross domestic product (GDP) growth, leading to relatively to slow rate of increase in domestic energy consumption across the forecast period both with and without the CPP, Sieminski said.

Thanks to a shift towards low- and no-carbon fuels, both CO2 intensity and energy intensity per dollar of GDP are expected to continue trending downward through 2040 under the reference case, he said.