Natural gas production in the Energy Information Administration’s (EIA) Other States category, which includes Pennsylvania, Ohio and West Virginia — and, with them, some of the nation’s booming shale plays — reached 26.37 Bcf/d in July, compared with 26.13 Bcf/d in June and 22.67 Bcf/d in July 2012, EIA said Monday. 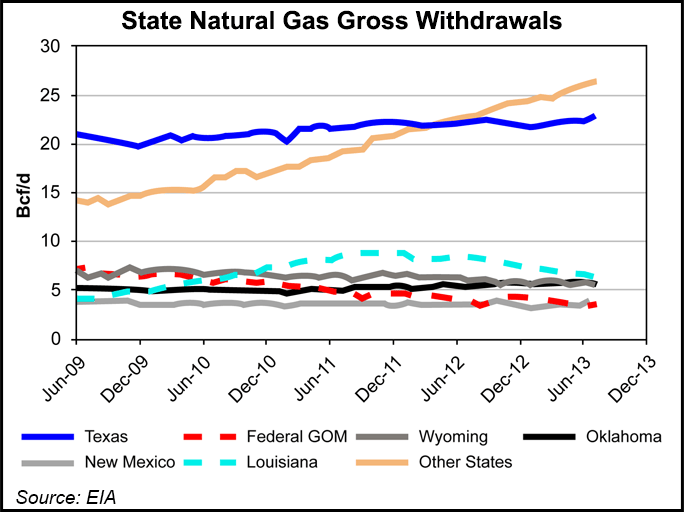 “Other States saw an increase of 0.9% or 0.24 Bcf/d primarily because of new wells in the Marcellus Shale,” EIA said.

The Other States category, which had traditionally accounted for less production than Texas, overtook the Lone Star state last year and in July outproduced Texas by 3.53 Bcf/d.

“Overall, with the new data points, strong monthly production growths since April of this year indicate that Lower 48 natural gas production remained on a robust upward trajectory, as we expected,” according to Barclay’s analysts Biliana Pehlivanova and Shiyang Wang.

“Production data for August and September are likely to show some weakness, as key parts of the country were affected by temporary disruptions such as widespread heavy pipeline and well maintenance, and the Colorado flooding. Fires at two processing plants in the Northeast have also curtailed production. We expect U.S. Lower 48 production to regain strength and maintain a growth trajectory once it recovers from these temporary disruptions,” the analysts said.