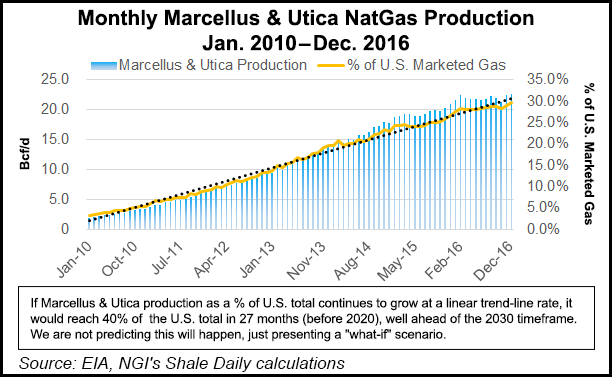 Wolf and the Team Pennsylvania Foundation cited a newly released study by IHS Markit titled Prospects to Enhance Pennsylvania’s Opportunities in Petrochemical Manufacturing. The Keystone State is seen by many as having the makings for the next hub of the petrochemical industry. Shell Chemical Appalachia’s recent decision to construct an ethane cracker in western Pennsylvania is largely to thank for this.

The IHS Markit study was commissioned by the state and teased earlier this year with the assertion that the Marcellus and Utica shales could support up to four more ethane crackers in addition to the one Shell is building. Other facilities have been proposed throughout the region, but some of those projects remain onhold. PTT Global Chemical pcl is expected to make a final investment decision later this year about a large ethane cracker that would be located in Belmont County, OH.

“The foundation for building a diverse and robust petrochemical and plastics industry was initiated with the decision by Shell Chemicals to invest in Pennsylvania — and we must ensure that we make the most of this chance to create good paying jobs for Pennsylvanians,” Wolf said Tuesday in announcing the study’s release.

Pennsylvania has a base of existing plastics manufacturers as potential customers, which IHS said will benefit from significant reductions in feedstock costs because of their close proximity to these resources.

“The prospect that the Marcellus and Utica Shale plays can support up to four additional ethane crackers beyond Shell Pennsylvania Chemicals is an exciting opportunity for the commonwealth, as is the IHS forecast that a coordinated strategy has the potential to leverage up to $3.7 billion in investment into NGL assets alone for gas processing facilities, NGL pipelines and storage facilities,” said Dennis Davin, secretary of the state’s Department of Community and Economic Development. “The study is a roadmap that will help us jump start our strategy to attract that investment.”

Shell’s facility is being built on 400 acres in Beaver County. The cracker would have the capacity to consume about 100,000 b/d of ethane. The company has said it would be operational sometime in the early 2020s.

IHS Markit predicts continued upward production trends for both natural gas and NGLs through at least 2030, with the Marcellus and Utica shales acting as a key contributor. “Between 2026 and 2030, NGL production to meet U.S. demand is expected to reach nearly 6.3 million b/d, of which more than 1 million b/d of NGLs is expected to be produced in the Marcellus and Utica Shale plays,” the consultancy said. “The high value of the NGL contained in the natural gas stream — specifically ethane and propane — is responsible for driving ongoing production increases.

Between 2026 and 2030, the expected ethane production from the Marcellus and Utica will be enough to support up to four additional world-scale ethane steam crackers in the region, the consultancy said.

“As with ethane, propane production is expected to increase in the Marcellus and Utica Shale plays through at least 2030 and is expected to be priced lower than propane from the USGC…[P]ropane has multiple competing end uses that may result in NGL being used for other purposes.”

Propane can be used as a heating fuel or as a petrochemical feedstock to produce propylene through propane dehydrogenation or by steam cracking a mixture of ethane and propane. Propylene can be converted into polypropylene, a high-growth plastic resin.

“IHS Markit predicts propane will continue to be used primarily in residential, commercial, industrial, and utility sectors as a fuel because of strong demand in both domestic and international markets.”

The consultancy said that despite higher development costs compared with the USGC — where there is a mature petrochemical industry — southwestern Pennsylvania’s polyethylene and polypropylene production is expected to be “highly competitive” on a cash cost basis relative to existing production centers.

“This includes not only the USGC, but also Alberta, Canada; Sarnia, Canada; and the Middle East,” IHS Markit said. “The cost advantages over these global existing industry hubs are driven by low-priced ethane and propane (the main feedstocks for production), proximity to major North American demand centers (resulting in reduced freight and transportation costs), and a significant base of plastics manufacturers in Pennsylvania and the northeastern United States.”

Marcellus Shale Coalition President David Spigelmyer said, “Pennsylvania’s world-class natural gas resource base has the potential, as this report outlines, to fundamentally reshape our near- and long-term manufacturing potential. To fully realize these generational opportunities, however, as the authors point out, Pennsylvania must put in place policies that streamline permitting delays and address other regulatory challenges that we continue to face.”

For more on Pennsylvania’s NGL-driven future, check out NGI’s special report on the Shell cracker and what it means for the region, as well as the recent webinar on Appalachia ethane.