U.S. natural gas production was 2.65 Tcf in July, up 3.7% compared with 2.55 Tcf in July 2013, and total production through the first seven months of 2014 was 18.26 Tcf, up almost 5% compared to the same period last year, thanks in large part to the nation’s shale plays, according to the Energy Information Administration (EIA). 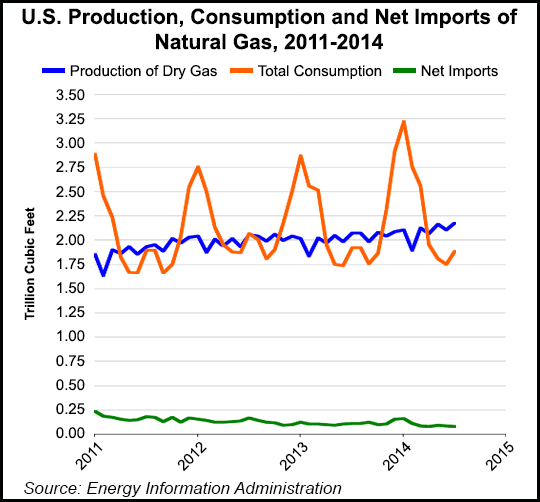 EIA reported 127.4 Bcf of natural gas exports in July, compared with 128.6 Bcf in July 2013. In the first seven months of this year, there was a total of 906.6 Bcf of exports, down sharply from 966.3 Bcf in the same period in 2013. Liquefied natural gas (LNG) exports are up this year compared with 2013, while pipeline exports to Mexico and Canada have fallen off.

The project, the first on the East Coast to be greenlighted, would enable Dominion to transport up to 860,000 Dth/d from existing pipeline interconnects near the west end of the Cove Point pipeline to its terminal to export up to 5.75 million tons/year (0.8 Bcf/d) of LNG. FERC has approved three other LNG export projects, all in the Gulf of Mexico: the Sabine Pass Liquefaction Project, the Freeport LNG Project,and the Cameron LNG Project (see Daily GPI, June 19). Fourteen LNG export proposals are pending before FERC.