One of Colorado’s richest local jurisdictions, Weld County, with extensive oil/natural gas and agricultural operations, in June launched discussions with a number of other counties in the northeastern part of the state about a move to secede and form a new state. 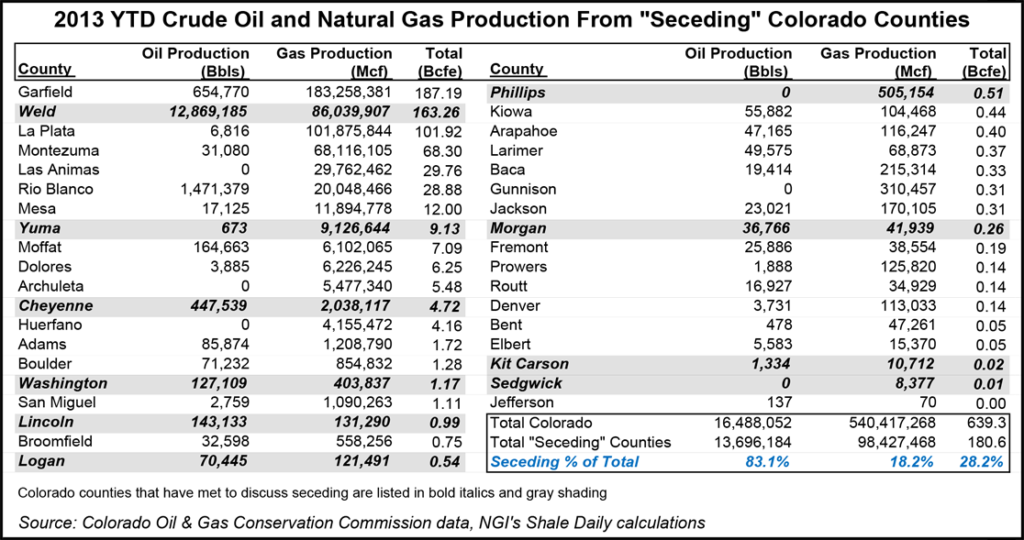 Neighboring county officials who attended a meeting hosted by Weld’s five county council members are skeptical, but they feel they can’t ignore Weld, the county north of Denver with vast energy and agricultural resources. Last Friday, the Weld County Assessor placed a $7.1 billion value on the county’s assessed property values, with more than half (55%) attributable to oil/gas operations. Underlying the county are the Niobrara, Wattenberg and Codell formations.

An upcoming step by Weld officials is to determine if they attempt to place a measure on the November ballot this year, calling for a statewide vote on whether the state legislature should be asked to take some initial action that could lead to secession of one or more northern Colorado counties, many of which feel shortchanged by the state.

While many county officials don’t think forming a new state is a viable option, they nevertheless are in agreement regarding northern counties’ unhappiness with state gun control legislation, oil/gas regulations and an increased renewable energy standard for rural electric utilities (SB 252).

Weld County reportedly sends more oil/gas revenue to the state coffers than it gets back for schools, roads and other services. Hence, it recently called a Colorado Counties Inc. conference that attracted representatives from at least nine other northeast counties: Cheyenne, Kit Carson, Lincoln, Logan, Morgan, Phillips, Sedgwick, Washington and Yuma.

So far, a Colorado Oil and Gas Association (COGA) spokesperson said the energy industry group is following the initial discussions only through “what we read in the newspapers.”

The spokesperson for Gov. John Hickenlooper told NGI’s Shale Daily that both rural and urban dwelling citizens in Colorado support the state’s moves to create background checks on gun sales, increasing renewable energy emphasis and supporting “responsible” oil/gas development. “Not everyone agrees, of course, but we keep trying.”

Among the Weld County elected officials advocating taking the idea farther along, there is a concept for having objective graduate student researchers at the University of Northern Colorado’s business school study the financial details for secession, and a county attorney has told the commissioners the decision on a November ballot measure would have to be made by early September.

Commissioners from Sedgwick and Logan counties have said publicly that even if a ballot measure were put to a vote, they don’t think it has a chance to pass. A Logan elected official told local news media that his constituents told him secession “isn’t going anywhere.”

The ballot measure would be aimed at forcing state lawmakers to make a formal request to Congress, which ultimately would have to approve secession.