Abundant U.S. shale energy supplies have created the false impression that energy independence is near, while in the transportation sector nearly half of U.S.petroleum supplies are still imported, an oil analyst/editor told an industry conference Tuesday in Long Beach, CA. 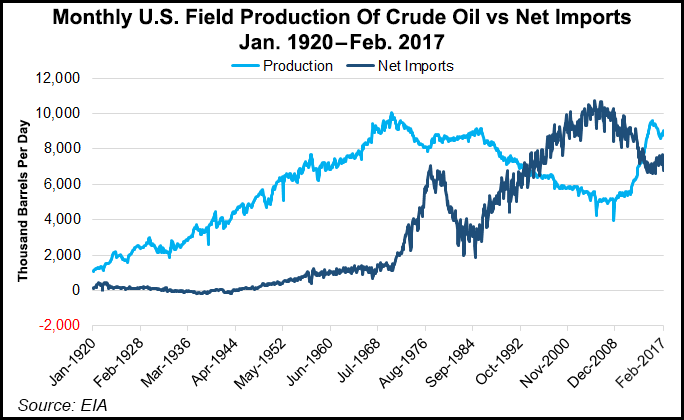 With imports still playing a huge role in fulfilling North American transportation needs, there are “a lot of myths surrounding shale oil,” said Piotrowski, senior reporter/deputy editor for SAFE’s The Fuse. He said that in the past five years, U.S. shale has seen extraordinary growth, jumping from 5 million b/d in 2008 to 9 million b/d currently.

“But we still import 8 million b/d, and that’s about half of what refineries use,” he said. “Looking to the future, the outlook for U.S. shale is very uncertain.”

Piotrowski said the Energy Information Administration’s future range is 7-17 million b/d of U.S. shale production, and “the outlook depends on price, technology, and what the oil industry does.”

Joe Cannon, CEO of the Fuel Freedom Foundation, is bullish on natural gas, particularly related to ramping up U.S. production and use of more methanol and the E85 fuel in flex-fuel vehicles, of which there are increasingly more operating in fleets. “Right now there are two technologies that can turn natural gas into ethanol in a meaningful way,” he told the ACT audience. “We are basically interested in fuel choice, diversity of fuels, and competition at the pump using American natural resources.”

The common thread is the widespread interest in more “American-made” energy and the jobs that can be created, said Erik Neandross, a principal in Gladstein, Neandross & Associates, founder-sponsors of the ACT Expo.

Randy Frye, an Indiana state representative who helped shepherd through two state laws that have allowed more fleet operators to move to NGVs, applied this truism in winning support for the legislation. Frye urged the gas industry to “work with your state legislators and educate them on what’s new.”

Berg said California intends to work with federal agencies and other stakeholders to continue its aggressive climate agenda. “We continue to work with other states that are working on the same issues, and we’re intent on keeping focused,” she said.