Operators have turned to shales because that’s where the oil is. So it’s not surprising to find that shale towns are also where the money is, according to personal income data from the U.S. Bureau of Economic Analysis (BEA). 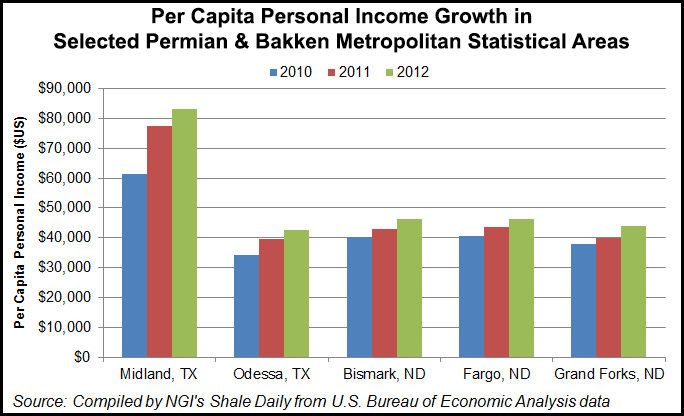 Personal income growth slowed last year in 311 of the country’s 381 metropolitan statistical areas (MSA). But wallets fattened faster in 65 MSAs, led by Midland, TX, which was the fastest growing MSA in terms of personal income (12.1%) for the third year running. Odessa, TX, at 11.5%, was the second-fastest growing, repeating its position from 2011.

“For both MSAs, the mining industry, which includes oil and gas extraction, contributed more than any other industry to personal income growth,” BEA said.

Across the country, personal income growth remained unchanged in five MSAs. On average, MSA personal income rose 4.2% in 2012 after growing 6.0% in 2011. Worst off was Yuma, AZ, where personal income declined 1.6%; it was one of five MSAs to see a decline. Inflation, as measured by the national price index for personal consumption expenditures, slowed to 1.8% in 2012 from 2.4% in 2011.

Bakken Shale country wasn’t left out of the economic boom either. North Dakota’s three MSAs were among the fastest-growing MSAs in the country in 2012: Grand Forks grew 10.5% and ranked third, Bismarck ranked fourth (10.1%), and Fargo ranked sixth (8.3%). Personal income in the non-metropolitan portion of North Dakota — where the booming mining industry is located — grew at an even faster 26.3% pace.

In the six years spanning 2007 through 2012, total U.S. private sector employment increased by more than one million jobs, or about 1%. However, over the same period, the oil and gas industry — segmented into drilling, extraction and support segments — increased by more than 162,000 jobs, which equates to a 40% increase, according to a recent study from the U.S. Labor Department’s Bureau of Labor Statistics (see Daily GPI, Aug. 12).