With heavy ramifications for Midcontinent energy infrastructure and eventual exports, the United States will find itself with oversupplies of both domestically produced liquids and crude oil from now through 2017, market consultant/analyst Rusty Braziel of RBN Energy LLC told a session of the Colorado Oil and Gas Association (COGA) annual meeting in Denver earlier this month (Aug. 13-16). 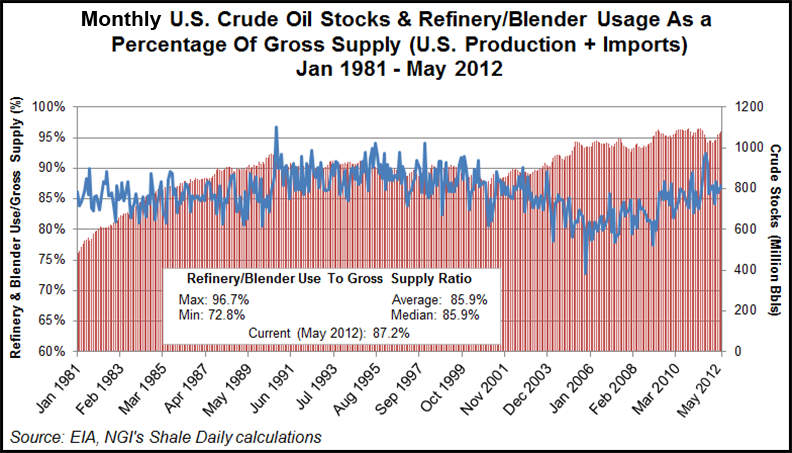 Changes in gravity and sulfur readings on the supplies over time will influence investments in refineries; surpluses in light, sweet crude; and finally the U.S. energy export mix, Braziel said in his remarks as part of a COGA panel that included senior executives from DCP Midstream Partners, Oneok and Western Gas Partners, along with moderator Steve Jones from Tudor, Pickering, Holt & Co.

Emphasizing the steady increase in U.S. liquid hydrocarbon production, Braziel said the industry is “in for big changes in how it does business,” noting that what he considers the biggest change will be “significantly more exports of U.S. energy products. He is predicting that “will be a good thing for the markets, for the industry and for the economy.”

More than 70% of the new NGL pipe capacity will be used to get the additional product to the Gulf of Mexico (GOM) where most of the growth in demand will be located, Braziel said. “By 2017 there will be several new — and very large — chemical plants built, and until then, the supply-demand balance will periodically move through oversupply cycles.”

He anticipates that NGLs will be in an oversupply situation generally, but the sector will find the situation “manageable” with the surplus finding a home in export markets, in the growing petrochemical demand, and “for the next few years back into natural gas” through ethane rejection.

In terms of U.S. crude production, Braziel focused on six major shale plays, along with incremental Canadian imported supplies, assessing that the nation is looking at an overall increase of 5.1 million b/d by 2017 in what should be the conclusion of 10 years of robust growth after U.S. production fell steadily for nearly 30 years until 2009.

“Fourteen new pipeline projects or capacity expansions are being built to get new crude production to market, with most of those pipelines moving volumes to Cushing, OK, and then down to the Gulf Coast,” he said.

Overall, the relatively lower prices for U.S. and Canadian crude will continue, said Braziel, noting that “crude oil prices on the GOM will be cheaper than equivalent world crude oil prices.” But he added that Cushing, Rockies and Canadian prices will increase at some point, helping prices “balance out to variable transportation costs, adjusted for quality differentials.”

And on the operations side, the influx of lighter, sweeter supplies from the shales promises to transform the refining sector. “It will take a long time for the U.S. refining system to adjust to all of these realities,” Braziel said.

Despite the rash of crude oil refinery closings in the Eastern United States within the past few months, U.S. refineries in total appear to be burning about the same percentage of incremental gross crude oil supplies (defined by U.S. production plus imports) as they have over the last 30 years. Last May the most recent data available from the Energy Information Administration, U.S. refineries took in 87.2% of gross monthly U.S. supplies, only slightly higher than the monthly average of 85.9% since January 1981. However, crude oil stocks have continued to build at a steady pace since 2001, and closed May at 1.082 billion bbl, just a shade below the all-time high set in May 2011.