The fossil fuel industry was both damned and praised, but most everyone agreed Tuesday on the opening day of the Alternative Clean Transportation (ACT) Expo in Long Beach, CA, that the U.S. shale gas revolution has helped stimulate alternative transportation fuels. 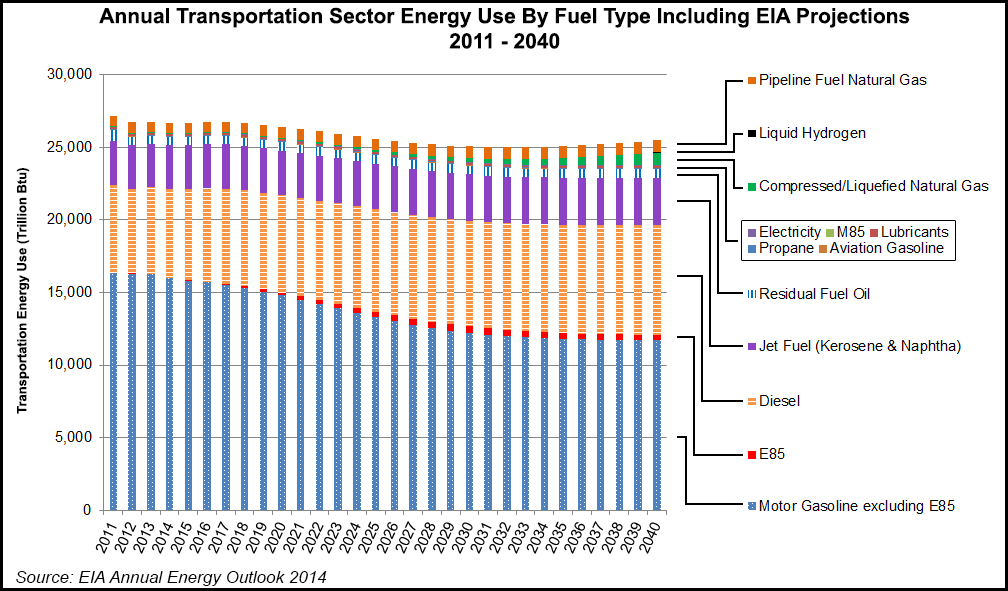 ACT, promoted as North America’s largest clean transportation event, is expected to draw up to 4,000 people and 250 sponsors and exhibitors at the city’s convention center.

Keynote speakers touted shale gas for its role in sparking not only a renewed natural gas vehicle (NGV) market, but a broader alternative transportation renaissance. VIA Motors Chairman Bob Lutz, a retired U.S. auto industry executive who is now a national spokesperson for the electric vehicle (EV) industry was one of those giving credit to shale gas.

“I am grateful and I think we should all be grateful to the petroleum industry, which without a lot of government help, and by the use of new technology, advanced fracking [hydraulic fracturing],” said Lutz. Oil and gas operators “were the ones who created the boundless supplies of natural gas that have benefited American industry, and it is the cheap natural gas that is fueling all of this revolution in alternative drives for motor vehicles. Natural gas has been the leading component in the electrification strategies, too.”

National Biodiesel Board CEO Joe Jobe in his speech tried to dispel what he called the “myths” of the petroleum industry, although he did not disavow natural gas as one of the essential alternative vehicular fuels. A major alleged myth is that the oil and gas industry doesn’t receive any government subsidies, he said. While advocating diversity in the energy fuels sector akin to what exists in the fuels mix used for electricity generation, Jobe said the answer is not replacing foreign oil with more domestically produced oil, but in adding more alternatives to gasoline and other petroleum products.

Similarly, in some welcoming remarks, Long Beach Mayor Bob Foster, a former president of Southern California Edison Co. and strong EV advocate, outlined his city’s use of liquefied natural gas (LNG) in its heavy duty fleet vehicles and the reduction of the air pollution in the adjacent Long Beach-Los Angeles harbors by converting most of the 11,000 trucks operating in the area to run on LNG.

Even with the strong acknowledgement for the role of compressed natural gas (CNG) and LNG in light-, medium- and heavy-duty vehicles, Volvo Group’s Dennis Slagle, executive vice president for group truck sales and marketing in the Americas, cautioned that diesel — “clean” and traditional — will be around for a long time yet in the trucking sector.

“Diesel will remain a predominant fuel for heavy duty vehicles,” said Slagle. “It should be understood that the money we make in clean diesel allows us to invest in other alternative fuels [as part of a global sustainability initiative at Volvo]. We should be very proud of what we’ve accomplished.” He noted that Volvo as a global operator has to adjust to various fuel and vehicular standards around the world, and the United States has the toughest standards and cleanest heavy-duty vehicles in the world.

Under its Sustainable Solutions for Transportation Vehicles global program, Volvo is looking at the way vehicles would be used in the future. Ultimately, Slagle said the solution might include new ways to use the nation’s abundant gas supplies through the development of dimethyl ether (DME), a colorless gas that is easy to liquefy (see Daily GPI, May 18, 2012).

“We’ve had an advanced DME project going in Europe for a couple of years, and the use of natural gas as a feedstock now brings new economic feasibility to the project,” said Slagle, noting that DME can be produced from other biofuels. “Today we have several test cars running on DME and are working with several large-scale suppliers.” He said Volvo plans to move to low-volume production of DME vehicles perhaps by 2017. It would allow for compression ignition — rather than spark ignition — which is a major break-through that Volvo and other engine makers are seeking.