Most exploration and production (E&P) executives believe shale natural gas prices have bottomed out, with 87% predicting that prices will stay the same or increase over the next two years, according to a survey of 357 North American executives. 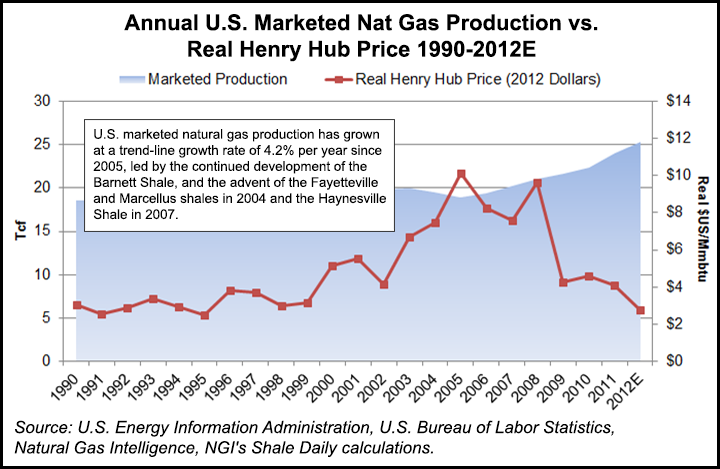 The survey, implemented by the Economist Intelligence Unit and sponsored by RBC Capital Markets, is based on information from C-suite executives, as well as interviews with companies involved in the shale boom, and desk research based on data, documents and reports.

Of the 87% of the executives who believe gas prices have bottomed out, almost three-quarters (73%) anticipate a price increase of 10% or more in the next five years. “Until then, E&P companies are moving away from dry gas and focusing instead on liquids-rich plays, such as wet gas and shale oil,” the researchers said.

Low natural gas has had a “positive impact on manufacturing, but not a significant positive impact on the overall U.S. economy,” according to executives surveyed. However, a “competitive advantage” is anticipated for U.S. and Canadian companies.

According to data from the U.S. Energy Information Administration and the U.S. Bureau of Labor Statistics, as well as prices from Natural Gas Intelligence, U.S. marketed natural gas production has grown at a trend-line growth rate of 4.2% per year since 2005, led by the continued development of the Barnett Shale, the advent of the Fayetteville and Marcellus shales in 2004 and the Haynesville Shale in 2007.

“We are entering a paradigm shift in the way that businesses and national governments look at energy, particularly as it relates to underlying market drivers, business models, risks and economic impact stemming from the shale gas boom,” said RBC’s Marc Harris, co-head of global research.

Richard Talbot, who co-heads research with Harris, said the next few years “will be transformative for companies, particularly those in the energy, infrastructure, manufacturing and transportation sectors, which will, in turn, create opportunities for both investors and corporations.”

Among the key findings from the survey, RBC said the shale gas boom was making U.S. companies “think twice.”

Companies in the energy, manufacturing and transportation sectors “are reassessing underlying market drivers, business models and risks as a result of the shale gas boom. On an economy-wide level, respondents expect that shale gas will improve country competitiveness in both the U.S. (52%) and in Canada (48%).”

The boom in unconventional gas production has impacted industries differently, the research found. The manufacturing and transportation industries see low cost shale gas as “especially beneficial” if they rely on feedstock or direct energy use to compete on a global level.

“In industries like petrochemicals and fertilizers, where feedstock or energy inputs can account for up to 90% of total production costs, low priced shale gas will be a game changer,” the researchers said. “The impact on the transportation industry will be more subtle; rather than a complete transformation to gas-based usage, diversification will likely take place across the industry.”

For the U.S. economy, more than half (54%) of those surveyed believe the unconventional boom could lead to natural gas becoming a significant U.S. export.

“However, revenues generated from natural gas exports will not necessarily have a significant positive impact on the state of the overall U.S. economy,” said most of those surveyed. “The implications on job creation will be positive, but energy security and environmental concerns could limit the scale of natural gas exports in the U.S.”

A lack of transparency regarding chemicals used in drilling remains an obstacle to investment, according to one-quarter of the institutional investors surveyed.

“While the industry does engage in some reporting on the topic, some of it remains incomplete or inaccurate and presents an issue for potential and existing investors,” researchers said. “Improved transparency, increased environmental risk management and implementation of best practices will help the industry maintain its license to operate while at the same time capturing the benefit of production currently lost to fugitive emissions.”

Infrastructure was seen as a challenge to keeping up with “demand dynamics.” Sourcing infrastructure investment capital “is unlikely to be a major bottleneck to the growth of the gas industry,” but “regulatory risks remain prevalent.”

Regional pipeline supply dynamics have changed rapidly in response to changing demand conditions, said RBC. An increase in natural gas liquids “demand production has created an infrastructure bottleneck in some regions,” including the northeastern United States.