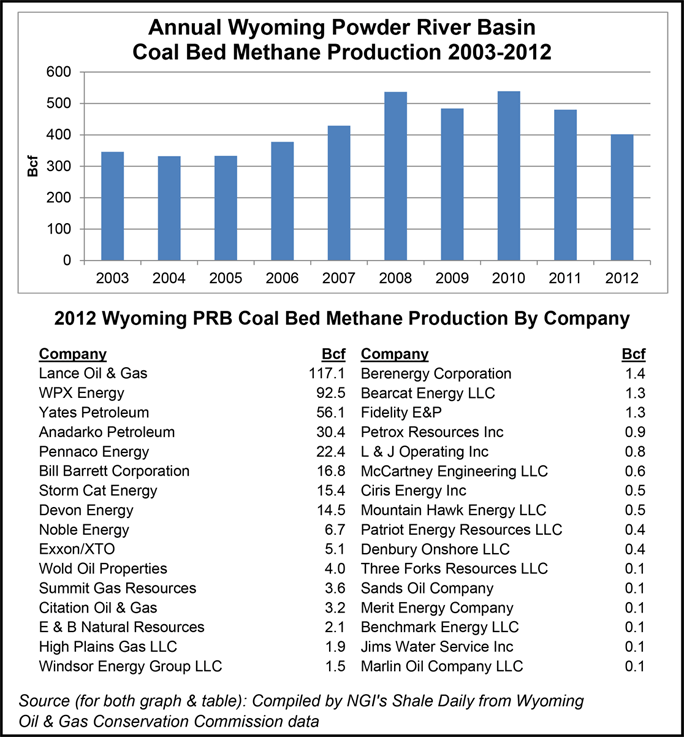 The Casper plant had not done any local business during the past two years. Enerflex had been directing work to it from a project in Queensland, Australia, but that contract has expired.

Wyoming Gov. Matt Mead, who is traveling in Canada with his energy advisers, had no comment on the development, a Cheyenne-based spokesperson told NGI.

Market shifts from PRB coalbed supplies to shale gas supplies in the East were specifically cited by Enerflex Americas President Jerry Fraelic in a memo to employees being laid off. Two other Enerflex divisions in Casper will remain open: a gas-fueled engines and generators unit, and a compression equipment rentals/retrofit business. Seven of the affected CBM plant workers will be transferred to those units. Twelve workers will remain until the plant is shuttered.

The plant was opened in 2006, primarily to provide CBM compression in the Powder River Basin. Fraelic said the plant had been “very successful in serving this market over a number of years. Unfortunately, with the emergence of more economical shale gas plays in other parts of the United States, the PRB is no longer an active area for new compression.” When the plant opened, annual CBM production from the basin was on the upswing, but after peaking at 539 Bcf in 2010, it has been in decline, falling to 402 Bcf last year.

Enerflex cited the East, particularly the Marcellus Shale, as the place where most of the U.S. gas is being drilled. “It is easy to access, easy to produce and is situated underneath the market that consumes it,” Kurt Schaerer, a general manager for Enerflex facilities in Canada and the northern United States, told local news media in Casper.

Enerflex officials said the closing will not affect the company’s Denver sales office, and for the future, it will concentrate on new sales on gas development in the Bakken in North Dakota, the Niobrara in Colorado and parts of California.