The U.S. plastics industry is expected to grow rapidly over the next decade, fueled by cheap and abundant shale natural gas that’s made it more competitive with overseas markets, according to a report by economists at the American Chemistry Council (ACC). 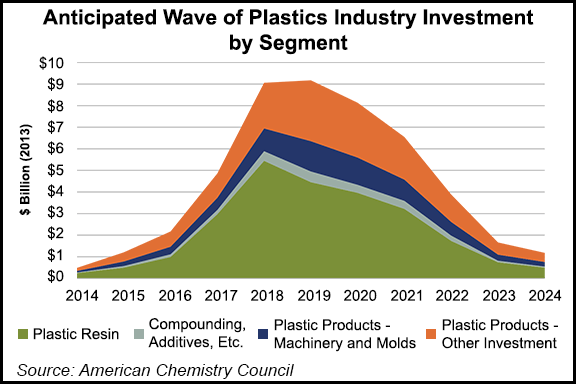 Billions of dollars of planned investments for chemical manufacturing capacity expansions and new-builds in the industry are expected to create hundreds of thousands of jobs. The ACC said shale gas development has changed the competitive landscape for the U.S. plastics industry. The country’s producers use natural gas-based feedstocks, unlike their European and Asian competitors that use oil-based feedstocks.

As a result of the spread between the price of oil and natural gas, the ACC has been tracking more than $130 billion of planned investments in chemical manufacturing capacity that have been announced since 2010.

“This substantial investment in new capacity is creating more high-paying jobs in the United States in this high-tech industry,” said Steve Russell, ACC’s vice president of Plastics. “Plastics materials makers pay workers on average nearly $85,000 [annually], which is more than 73% higher than the average wage for workers across U.S. industries. Companies are reshoring jobs to the United States as new manufacturing is increasingly being located here at home.”

The ACC’s study found that nearly 462,000 direct and indirect jobs would be created over the next decade in the industry, its supply chain and the broader economy as plastics production grows. Increasing feedstock and production would be consumed by the plastics-intensive automotive, building and construction and packaging industries, among others.

U.S. natural gas production has increased sharply in recent years, where nearly all the growth has come from the nation’s leading shale fields, such as the Marcellus, Haynesville and Eagle Ford. The Energy Information Administration projects that the top seven fields will produce more than 46 Bcf of natural gas in June, up from roughly 37 Bcf at the same time last year.

The ACC estimates that combined output from the new investments in resin, compounding and ancillary chemistries and products could reach more than $46 billion over the next decade. Increased plastics production,  the report said, could also increase net plastic exports from $6.5 billion to $21.5 billion from 2014-2030.

The ACC tracks chemical industry investment announcements rather than potential capital spending. The organization used that data to estimate output and related growth.