EQT Corp. CEO Toby Rice told an industry audience in Pittsburgh on Wednesday that “shale works,” insisting that the country’s leading unconventional oil and gas producers will increasingly demonstrate the economics of their assets and more consistently deliver stronger returns as the investment community pushes for better results. 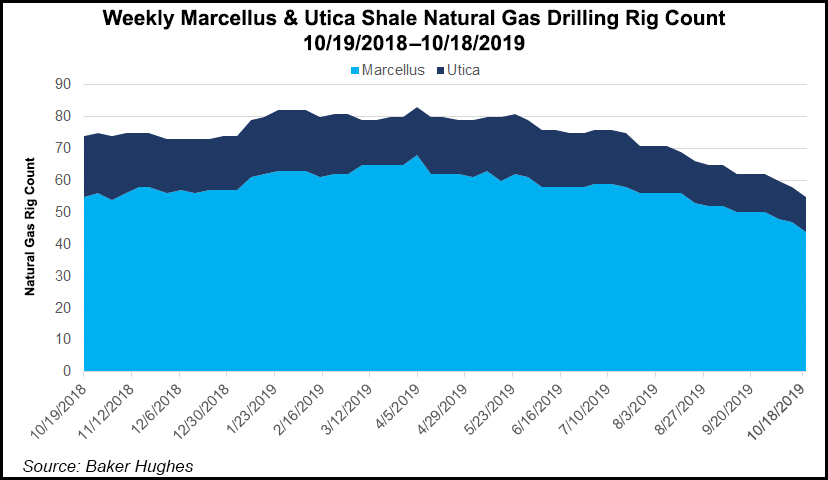 “How efficient shale development can be, I think, has just been clouded historically” by the “massive growth” the industry has seen over the last decade or so, Rice said at the ninth annual Shale Insight Conference.

“What you’re seeing now with investors is that everyone wants to prove that shale works and so I think the ultimate sign of that is going to be the ability for a company to generate free cash flow, and that is going to require much greater efficiencies, because there’s greater scrutiny on it,” he added, saying that companies will increasingly demonstrate a stronger business model because of the quality of their assets.

Rice took the helm of EQT, the nation’s largest gas producer, over the summer after a proxy battle to oust Rob McNally. Rice had argued that the company was underperforming, and he campaigned for a drastic overhaul.

Producers across the country are cutting spending and curbing activity, and gas producers have been particularly hard hit as prices have stagnated on a flood of supplies and demand that has failed to keep pace. The growth-at-all-costs strategies of years past have also fallen out of favor with investors that expect more capital discipline and better returns via stock buybacks and/or by establishing a sustainable dividend.

He pointed to the steep year/year decline in gas rigs, declining upstream activity and less spending in most basins as signs that are going “to help” with the gas “supply issue.”

However, the challenges gas producers face, particularly with low commodity prices, “creates tremendous opportunity for our customers,” he said, adding that “with gas prices being low, you see what we are building is demand for our product. We are creating a lot of relief for consumers.”

That relief is poised to expand as liquified natural gas (LNG) exports increase. Rice said he expects the bulk of U.S. natural gas production growth to be driven by LNG exports in the coming years and expects the company to play a stronger role in that market.

For now, Rice is focused on transforming EQT’s operations. The company intends to overhaul how it spends capital by implementing a strategy called combo development, which emphasizes planning wells years in advance to improve midstream constraints and the costs associated with other services. In the push to find more efficiencies, Rice said more wells with longer laterals will be added to pads in areas with the strongest economics. He sees the approach as one of the next revolutions in unconventional development.

Rice was among the first speakers to make remarks at the two-day conference hosted by the Marcellus Shale Coalition, the Ohio Oil and Gas Association and the West Virginia Oil and Natural Gas Association. The event also featured a keynote address by President Trump. Organizers said more than 1,400 were expected to attend, up from roughly 1,000 last year.

Another 3,700 people were also expected to hear Trump speak as the keynote was opened to the public. Trump last spoke at the event in 2016 on the campaign trail, when he unveiled plans for his energy policy. Tensions were high Wednesday, however, as a protest rally shut down roads around the venue in downtown Pittsburgh. Police had made more than a dozen arrests at the rally by the time the president had arrived in the city.