In the wake of a New York appellate court ruling that two local bans on oil and gas activities should be upheld, supporters of shale development in the Empire State worry that the damage may be done, regardless of how the bans fare through a possible appeal. 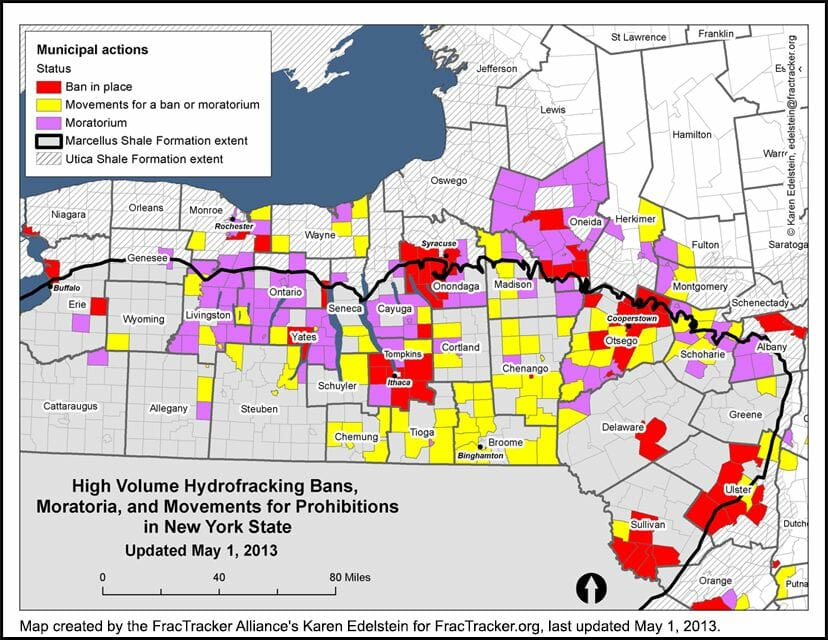 Last Thursday — in the cases Norse Energy Corp. USA v. Town of Dryden (No. 515227), and Cooperstown Holstein Corp. v. Town of Middlefield (No. 515498) — a four-judge panel at Appellate Division Third Department in Albany ruled that local bans did not violate the state’s Oil, Gas and Solution Mining Law (see Shale Daily, May 6).

“From an investment standpoint, when companies are looking to easily spend between $5 million and $6 million per well, they need a level of certainty,” Karen Moreau, executive director of the New York State Petroleum Council, a division of the American Petroleum Institute (API), told NGI’s Shale Daily on Monday. “This is just one more level of uncertainty for doing business in New York. They have certainty in other states.”

Attorneys for the oil and gas industry, landowners and other shale development supporters plan to appeal to the state’s highest court, the Court of Appeals. But Moreau said that if the appellate court rulings stand, local zoning boards could add another dimension of regulatory uncertainty over shale development, in a state that is already rife with uncertainties.

“It will really make it uncomfortable for companies to come in and sink millions of dollars into a community, then risk the chance that two years later, with a change in the local government, there could be a change in the law,” Moreau said. “That does not bode well for significant investments, which are required to efficiently and economically develop this resource.”

According to the FracTracker Alliance, a nonprofit organization that tracks the shale industry, 55 municipalities in New York State have enacted bans on fracking as of May 1, while another 105 have enacted moratoriums. An additional 91 municipalities were reportedly considering some form of prohibition, either through a ban or a moratorium.

FracTracker’s figures show the number of bans has increased 41% since last October (when there were 39 bans), but moratoriums have only increased 1.9%, and the number of municipalities considering either option rose just 4.6% — from 103 and 87, respectively — during that same time frame (see Shale Daily, Oct. 5, 2012).

Moreau said it’s a possibility that more municipalities may feel emboldened and enact their own bans and moratoriums after the appellate court rulings, but stressed that most of the currents ones were in parts of the state that won’t see significant development.

“This is really part of a political movement more than anything else,” Moreau said. “The counties along the border with Pennsylvania, where the heart of the Marcellus is, are very strongly in support of development. This is all part of a very well orchestrated plan to get bans and moratoriums passed in communities where there isn’t development potential.

“It’s a numbers game for our opponents. They want to use the numbers to go to the state legislature and try to get them to pass some form of legislation that will enact home rule.”

Lawmakers in New York have previously considered home rule legislation, and Gov. Andrew Cuomo has voiced support for such laws because they would empower local governments over whether or not to allow oil and gas drilling, among other things (see Shale Daily, Nov. 1, 2012; Aug. 8, 2012; July 11, 2012).

Jim Smith, spokesman for the Independent Oil and Gas Association of New York (IOGA), told NGI’s Shale Daily that the organization was surprised and disappointed by last week’s appellate court rulings. He said IOGA’s education and outreach efforts to municipalities would continue (see Shale Daily, June 4, 2012; May 22, 2012), but could face some changes.

“We’re looking at it right now and figuring out what the effort would be and how much energy we should put into it,” Smith said Monday. “We haven’t discussed the various possibilities of what might happen next. We’re still hoping that local bans will not supersede state law. Clearly these cases have to play out, but our position remains that municipalities should not be deciding the future of something this important to the state.”

API spokesman Reid Porter told NGI’s Shale Daily that whatever the outcome of the two cases, there probably wouldn’t be much of an impact outside of New York.

“Each state is pretty unique,” Porter said. “If you look at Pennsylvania, they took an approach that makes sense in terms of businesses having some sort of certainty to operate in, and the regulations apply across the board. Pennsylvania has had a lot of success with their approach, as has North Dakota.

“The rulings have more to do with the New York Constitution, and the way things are worded in it, than it has to do with New York’s opinion on whether oil and gas activities can move forward in the other states.”

Nevertheless, the New York cases have piqued interest in other states. Kathleen Sutcliffe, a spokeswoman for the environmental group Earthjustice, declined to comment on the current political landscape in New York, but disclosed that the group had “heard from some folks in Colorado, who were very interested in sharing this with their elected officials.”

In 2011, dairy operator Cooperstown Holstein filed a lawsuit against Middlefield, NY, accusing municipal officials of overstepping their authority by enacting a ban on oil and gas operations (see Shale Daily, Sept. 19, 2011). Middlefield’s town board had repealed its zoning ordinance and replaced it with laws that prohibited drilling operations, as well as other forms of heavy industry.

According to attorneys in the Dryden and Middlefield cases, opening arguments in both cases could begin before the end of the year if the appeals to the Court of Appeals are successful.