Shale gas plays generally, and the still-fledgling Utica play specifically, are promoting the potential for a reemergence of the U.S. industrial sector, according to industry experts who spoke Monday at the opening of the LDC Gas Forum Midcontinent meeting in Chicago. 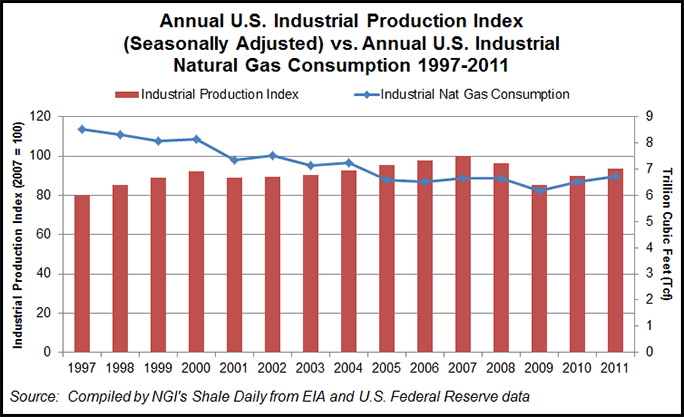 Coming out of a 10- to 12-year period in which there has been permanent destruction of industrial demand for natural gas in the United States, there has been some sustained demand growth since 2009 for the first time in a long period, said Jesse Blair, manager of pricing and product development for CenterPoint Energy Services. There are many contributing factors, but the main one is shale gas, Blair said.

Recent history shows a strong negative correlation between U.S. industrial production and U.S. industrial natural gas consumption, but that has begun to change. Those two statistics tended to diverge from each other from 1997-2009, but both posted year-over-year gains in 2010 and 2011.

Shale’s role in stabilizing U.S. gas prices while they have continued to soar globally has contributed to renewed interest by global firms in relocating industrial facilities in the United States, he said. “There are scores of projects that have been announced, and the capital outlay proposed collectively now totals more than $15 billion for the projects we have been able to look at.

“That definitely says to me that with low-priced natural gas today and projected forward, there is a lot of potential for gas demand,” said Blair, noting that current demand in the industrial sector is 19 Bcf/d with projections for that rising to 24 Bcf/d by 2025. “A lot the facilities are being planned now but won’t come online until 2017-2019, although a lot of this will depend on the U.S. economy growing. We will have to have GDP [gross domestic product] growth to have this happen, and the forecast here is for about 2.5% annual GDP growth.”

“[Utica represents] a remarkable opportunity to re-energize the Midwest industrial and power sectors,” Wince said. “This represents some real demand growth for every one of the projects that Jesse [Blair] has talked about in the petrochemicals, fertilizer and power industries. There is some real new demand that is now getting going.”

Wince said he sees a “new dawn” in U.S. industrial development, especially in the upper Midwest where Utica supplies can help re-ignite industries such as steel and petrochemicals. “It’s an historic new opportunity for the upper Midwest industrial sector. [The region] can be essentially energy self-sustaining when you combine the Marcellus with the Utica.”