In a broader global energy picture that is a “smorgasbord of fragmented pieces,” the United States is headed for a return to gas-on-gas competition among shale-dominated natural gas basins, according to Jim Duncan, ConocoPhillips chief analyst and commodity market strategist in Houston. 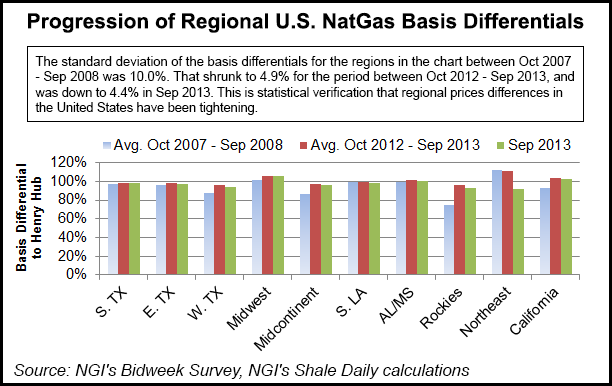 As the wrap-up keynote speaker Wednesday at the LDC Gas Forum Mid-Continent in Chicago, Duncan predicted that it is going to take the rest of the world longer than previously expected to catch up with the United States in developing various other shale resources scattered around the world.

Generally, Duncan agreed with the bullish overall presentations at the three-day regional natural gas industry conference that painted a picture for the U.S. domestic energy scene of growing supplies, moderate prices and shrinking basis differences and a future of increased worldwide and domestic demand for the U.S. gas industry.

What this adds up to for Duncan are very robust growth in midstream infrastructure development for both gas and oil, and a return of the gas-on-gas competition that the United States experienced a decade or more ago.

Noting that there have been dramatic shifts in production and creation of new market areas spurred by the development of various shale plays, Duncan said the greater upper Midwest Chicago area has to be one of the places to be watched closely because of a windfall [of gas supplies] into Chicago now. “It will be interesting to see because all of the analyses I have seen on proposed pipelines indicates you have production from all directions trying to get into the Chicago area,” Duncan said.

“That’s South, West, North and East — did I miss one? — trying to get into this market area. And this sounds amazingly like gas-on-gas competition. We had a lot of that in the late 1990s. From a realistic perspective, I think that is what we will see in the next couple of years and the producers will be happy to have it.”

On the demand side, Duncan echoed a number of LDC Forum speakers who are bullish on the gas-fired power generation sector, robust growth of industrials in the United States fueled by relatively cheap gas supplies and the vehicle transportation fuel sector.

With nearly $18 trillion of investment capital in the United States looking for good projects, Duncan said the IIR assessment is particularly timely. “Any type of energy production and any type of industrial growth is a target for these investment dollars,” he said.

Duncan said this has major implications for the U.S. economy as well as the energy sector, with potential increases in gross national product emerging from the industrial growth.