Lithium is one of many components of the salty brine, or produced water, that accompanies natural gas and oil production. It is also a key component of battery production for electric vehicles (EVs), power grid storage, and numerous other manifestations of the energy transition. 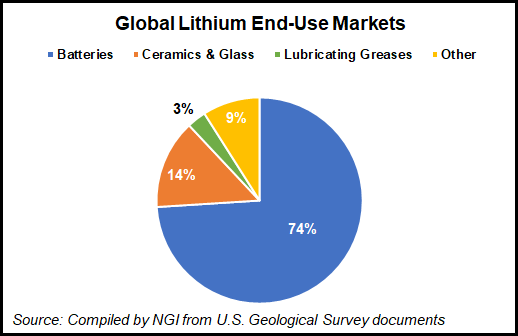 Recovering commercial volumes of lithium from the oil and gas byproduct would bolster the United States’ domestic supply of the valuable mineral, but it won’t be easy.

“Lithium is the target du jour,” Nick Pingitore, geochemistry professor at the University of Texas at El Paso (UTEP), told NGI. “Sexy, so to speak, because of the critical need for batteries. So decision makers focus on it.”

In February, the US Geological Survey (USGS) included lithium on its list of mineral commodities that it deems “critical” to national and economic security and susceptible to supply chain disruptions.

According to USGS, the United States’ domestic lithium production encompasses a single “brine operation in Nevada.” Moreover, the agency said the country last year relied on imports for more than one-quarter of lithium consumption.

There is no shortage of lithium worldwide, but there is a shortage of the metal in the global marketplace and “its price has fluctuated significantly in recent years,” the University of Houston (UH) reported last month.

B3 Insight’s Kylie Wright, technical product and content manager with the Colorado-based water data firm, told NGI that lithium “can be found in some produced water or oilfield brines at relatively high concentrations…”

More frequently, however, lithium is found “in fairly low concentrations,” she said. As a result, recovering lithium “from brines that contain numerous other constituents” tends to be a “complicated” task.

UTEP’s Pingitore said that a small number of ventures are extracting lithium from subsurface brine deposits, a process also being studied in Canada, but not from produced water.

“I don’t think that anyone is making significant money at it,” he said. “It’s early stages in this.”

Other significant minerals present in produced water include strontium, europium, and cerium, but lithium represents the best candidate for recovery in commercial volumes, sources at the University of Louisiana at Lafayette (UL) told NGI.

“Mining lithium requires a highly selective recovery technology, extracting just the lithium from produced water,” said UL’s Daniel Gang, director of the Center for Environmental Engineering and Protection. “The technology is still in the benchtop-laboratory or pilot scale.”

Like conventional mining, entropy figures prominently in the early part of the supply and value chain for extracting lithium from produced water, said Pingitore.

“The target is dilute,” he said, referencing the need to separate low concentrations of lithium from high concentrations of “competing elements” by processing “absolutely huge amounts of produced water” to recover lithium at commercial volumes..

The recovered lithium then needs to reach a 90-95% purity level, he added.

With applications such as lithium batteries, he said purity needs to top 99% and have an “extremely low content” of certain “poisoning” elements.

“Today, the world only has a fraction of the lithium production capacity online that it needs to hit some of the widely accepted EV forecasts through 2030,” he said. “The total opportunity around lithium is in the tens of billions of dollars over the next 5-10 years, and so it could be a very significant alternative revenue stream for shale players that are in possession of mineral-rich produced water streams.”

Not all well sites would be good locations for economically extracting lithium from produced water, according to observers of the nascent sub-sector of the oil and gas industry.

“This depends on the basin, since produced water mineral presence and concentrations can vary widely play-by-play, and even within the basins themselves, depending on the geology,” said Triepke.

When asked how the constituents of crude oil, running the gamut from sweet to sour and heavy to light, and natural gas, ranging from various degrees of wet to dry, influence suitability for lithium extraction, Pingitore answered with “good question.

“Crude itself contains various metals – vanadium is well-known, some nickel, and so forth,” he said. “How much, if any, of that gets transferred to the produced waters is probably an open question.”

Adding to the complexity of finding the right candidates for lithium extraction from produced waters, feasibility hinges on a high concentration of the target element – lithium – and a low concentration of competing “elements you don’t need,” said Pingitore.

Moreover, he said that overall water chemistry needs to avoid fouling or damaging the extraction system and the target element should not be “chemically complexed in a form that will hinder separation.”

Although technologies do exist to extract lithium from produced water, many are in early development at the case study and pilot project stages, said B3 Insight’s Commercial Product Manager Patrick Patton.

Triepke noted the drivers and end markets are “completely different” for lithium extraction and oil and gas production.

The “lithium pricing equilibrium is defined by demand for battery materials,” used in EVs as well as grid-scale storage facilities, as well as lithium mining capacity, he said. “Oil and gas fundamentals are more tied to transportation and power generation.”

Gang and a pair of colleagues at UL, Associate Professor of Petroleum Engineering Mehdi Moktari and Office of Innovation Management Director Alan Cohen, offered NGI a glimpse of how the business of produced water lithium extraction could look within the oil and gas industry.

On the demand side, lithium customers could include electric vehicle battery companies and others, they said.

Extraction would need to be implemented at a large scale, “commingling many oil and gas producers’ waste product to a centralized facility where treatment takes place to concentrate a brine with high enough concentrations of elements to make extraction economically feasible,” he said.

Commodity prices are currently high for lithium and other metals needed by the tech industry, and that may foster new development, said Wright.

“But the high prices would have to be stable to encourage development of these projects,” she added. “This definitely would have to take place at scale, so centralized water treatment facilities will be a key part of the opportunity.”

“This is key,” he said. “People often forget that capital recovery can take years, which means that the market will have to trust that the investments will pencil, and that is predicated on price expectations.”