Broomfield on Tuesday became the seventh local government in Colorado to impose some form of moratoria on oil and natural gas development in the midst of the ongoing implementation of state Senate Bill (SB) 181, which was enacted in April. 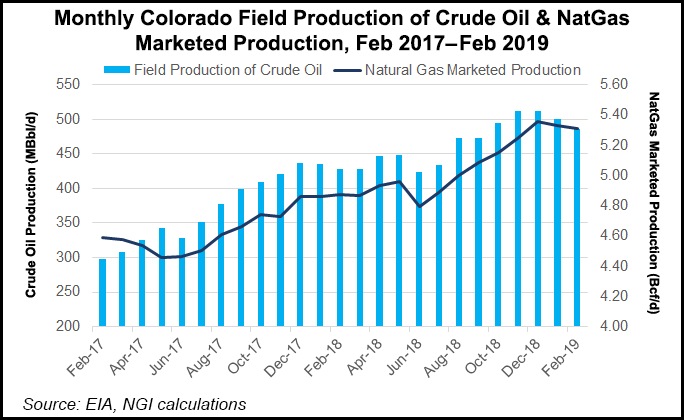 Broomfield’s city council unanimously passed a temporary ban until Nov. 14 to allow time for new state regulations to be drafted and for amendments to local government rules to take effect. Before SB 181 was signed into law by Gov. Jared Polis, Broomfield officials had directed the city/county staff to begin drafting amendments to the local rules.

Broomfield said the six-month moratorium is a continuation of local actions that began last July with the adoption of amended local regulations, as well as establishing increased setbacks this year from “residential and sensitive use developments” from well sites. The rules are focused on “preserving health, safety and welfare.”

Broomfield follows other Colorado communities taking similar actions that include Erie, Superior, Lafayette, Berthoud, Timnath, and Adams counties, according to the Colorado Petroleum Council (CPC). The city of Boulder “recently re-upped its perma-ban recently, too, though industry doesn’t even count them,” said CPC spokesperson Justin Pendergast.

In defending its actions, the Broomfield City Council said the state’s courts and the U.S. Supreme Court have found locally imposed moratoria “legally permissible and useful land-use regulation tools” when they are adopted for a “reasonably short” time period to allow effective governmental decision-making.

Colorado Oil and Gas Association (COGA) CEO Dan Haley called moratoria on industry activity “extreme actions” that have popped up all over since SB 181. “It is akin to bringing a sledgehammer to a tea party, and does nothing but inflame activist politics and unnecessarily scare people,” he said, noting that a better alternative would be to talk constructively with companies wanting to do business.

“We are disappointed that Broomfield has chosen to impose a moratorium on new energy development; its decision is misguided and harmful to our state,” said CPC Executive Director Lynn Granger. Colorado’s energy industry “prioritizes public health and safety, continuing to take proactive measures to ensure the energy development is done safely and responsibly.” SB 181 has not changed what she characterized as the industry’s “leadership role in environmental stewardship.”