Despite anticipated increases in productivity per rig across seven key U.S. producing regions, overall oil and gas output from these areas is expected to fall across the board from October to November, according to updated numbers released Tuesday by the Energy Information Administration (EIA). 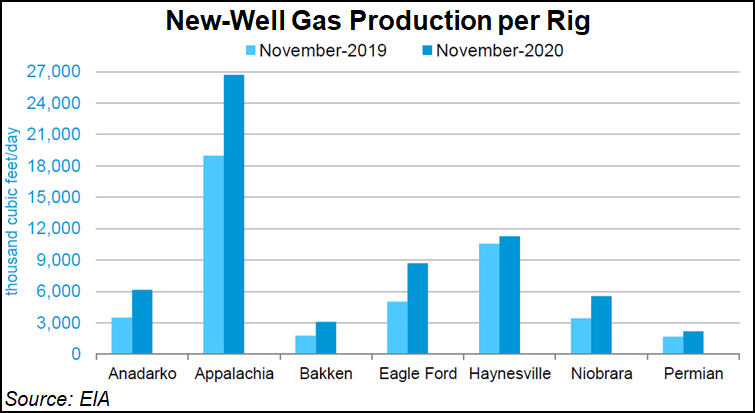 The agency’s latest Drilling Productivity Report (DPR) projects that total natural gas output from the Anadarko, Appalachia and Permian basins, as well as from the Bakken, Eagle Ford, Haynesville and Niobrara formations, will fall 617 MMcf/d month/month to 81.785 Bcf/d in November.

EIA expects the gassy Appalachian Basin to see the largest month/month drop in gas production, with output expected to decline 149 MMcf/d to 33.646 Bcf/d in November. Output in the Haynesville, another gas-focused region, is on track to fall 29 MMcf/d to 11.637 Bcf/d.

The projected declines come as new-well production per rig is expected to increase for all regions except for the Anadarko, according to EIA.

The number of drilled but uncompleted wells (DUC) across the seven regions is set to fall by 77 month/month to 7,592 in November, according to EIA. The Anadarko is projected to remove 23 DUCs from its backlog, down from 704 to 681. The Permian, boasting the largest DUC backlog, is expected to remove the largest number from its total month/month, on track to drop 21 units to 3,525 in November.

In last month’s DPR, EIA projected a 428 MMcf/d month/month decline in natural gas output and a 68,000 b/d decline in oil production from September to October.