Calgary-based Seven Generations Ltd. (7G) on Wednesday struck a C$1.9 billion ($1.47 billion) deal to expand its natural gas opportunities in the Montney Shale in a transaction that also would bring aboard cross-town rival Paramount Resources Ltd. as a 10% stakeholder. 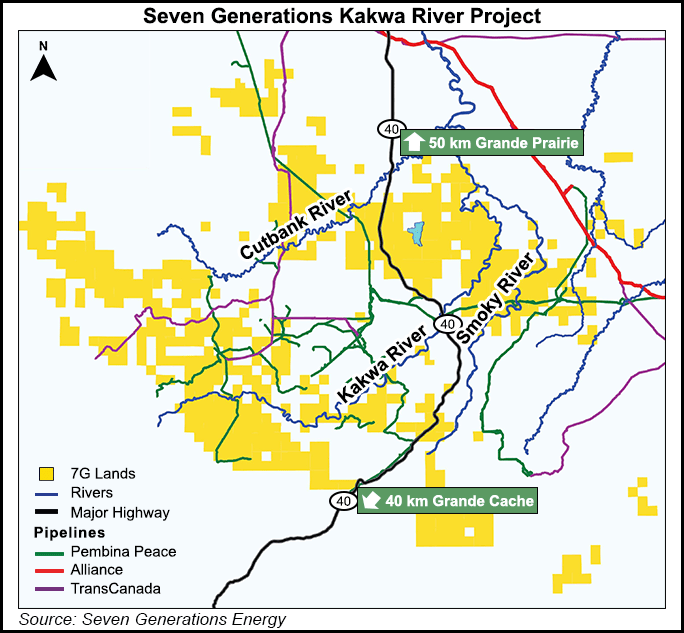 The agreement would boost the pure play Montney operator’s proved reserves by 199 million boe (47%), add 30,000 boe/d of current production and increase net sections of land by 155. Proved plus probable reserves would increase by more than one-third to 1,152 million boe/d from 859 million boe/d. The addition of Paramount’s gas capacity of 245 MMcf/d would increase 7G’s capacity by 48% to 755 MMcf/d. Long-term gas marketing and takeaway capacity are set to jump 40% to 847 MMcf/d from 607 MMcf/d.

“This asset merger of neighboring and early-life development lands will open the door to new operational and investment synergies in our Kakwa River Project,” 7G CEO Pat Carlson said. “Our drilling, completions and production innovations are delivering liquids-rich natural gas that ranks among the lowest supply cost in North America. When we assemble these lands, we will be in an even better position to anchor market expansion initiatives.”

7G, which now holds an estimated 418,100 net acres in the Montney, is bolting on another 99,200 net acres with the Paramount transaction, a 24% increase. Montney land sections would increase to 808 net, also 24% higher.

The “countercyclical acquisition is a natural consolidation of our high-growth ‘nest’ resource play, where our highest value nest 2 acreage will increase by more than 40%, from 101 to 144 sections,” COO Marty Proctor said. Once the transaction is completed, “we will have assembled more than half a million net acres of concentrated Montney lands, one of North America’s most prolific resource plays.”

The transaction is merging “the two industry leading positions in the world-class Kakwa Montney play,” Paramount CEO Jim Riddell said. “We believe this transaction provides a compelling opportunity to realize premium value on our Musreau/Kakwa acreage for Paramount shareholders, while retaining ongoing upside exposure to the play through our significant shareholding in Seven Generations.

“We have worked with, and invested in, members of Seven Generations management in the past and we believe this team will continue to bring the operational and innovative expertise that the Paramount team has brought to bear in the past to ensure the asset competes at the leading edge of North America’s natural gas industry.”

Consolidating the Montney position would enable 7G to optimize development, Procter said. “With seamless continuity of the offsetting and overlapping mineral rights across current borders, we now plan to drill longer wells in the Upper and Middle Montney formation. In addition, we expect to add significant potential resource in shallower and deeper formations across our expanded lands.”

The completed transaction would give 7G access to the newly commissioned Musreau Complex in Cutbank, which is designed to process 250 MMcf/d of sour gas. Paramount, which sold the facility to Pembina Pipeline Corp. four months ago, secured a 20-year midstream services agreement to support its Kakwa River assets (see Shale Daily, March 21). In March 7G completed commissioning its Cutbank River Gas Plant at the Kakwa project south of Grande Prairie, which also is able to process up to 250 MMcf/d (see Daily GPI, March 30).

The company frequently has owned and operated its processing capacity, but working with Pembina would help 7G to expand market access “and pursue a strategic partnership to develop some of the lowest supply cost production in North America,” Carlson said.

“Our low-cost supply is highly competitive, and we have the transportation in place to significantly increase our production over the next several years; however, Western Canada needs to expand markets in the long term,” Carlson said. “This acquisition will substantially add to and fortify the capacity of our large and high-quality resource, which is sufficient to underpin new, integrated market access infrastructure…

“We are continually evaluating opportunities to optimize the value of our resource and are engaged in discussions with new customers and potential developers of natural gas-fired electricity plants, liquefied natural gas export facilities, gas-to-diesel refining and petrochemicals. This complementary Montney acquisition adds significant resource scale as we look for ways to anchor major infrastructure development and build our business for many years ahead.”

The transaction was undertaken with a commitment to maintain financial strength while adding complementary reserves and resources, 7G CFO Chris Law said. “We expect it to be accretive within the first year of ownership on a cash flow, production and reserves per share basis,” the CFO said. “We expect the net debt to cash flow ratio to be approximately neutral at the end of 2016, and we expect to have sufficient cash and funds from operations to finance anticipated 2017 capital investments.”

The transaction, subject to Paramount shareholder approval, is set to be completed in August. Paramount’s board unanimously approved the transaction, and Riddell agreed to vote his common shares, representing about 37%. Paramount agreed not to solicit or initiate any discussions regarding any other transaction or business combination. It also granted 7G the right to match any acquisition proposal and agreed to pay 7G a termination fee of C$80 million “in certain events, including if Paramount recommends, approves or enters into an agreement with respect to an acquisition proposal.”