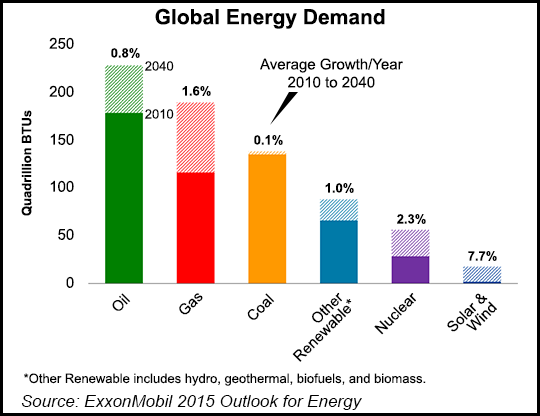 “The current price environment is just supply and demand fundamentals,” Tillerson said at the annual analyst day meeting at the New York Stock Exchange. “It’s no more complicated than that.”

Oil demand “has been very lackluster,” with only China’s thirst propping up prices until last year. And the lack in demand was happening “in the face of North American supply coming on…like a freight train into the demand picture…”

In terms of the duration of the decline in oil prices, “it’s always hard to say,” Tillerson told the audience. “But I would just make a few observations. One, I think the North American tight oil supply is more resilient than some people think it is.

“I would draw some…analogy from the shale gas experience of the last five to seven years, where reductions of rig counts went from north of 1,600 down to 280. Gas capacity went from 55 Bcf/d to 74 Bcf/d.” There was “an increase in a declining rig environment and a terribly declining price environment, $8.25 to south of $3.00.

“Now, I’m not suggesting you are going to have a lay down on tight oil, but I think there are a few lessons you can learn observing that,” the first being the resiliency of North America’s ability to grow tight oil supply regardless of less drilling.

“Second, you still have an enormous amount of global capacity that is tied up in geopolitically unstable areas that is not available, or it’s certainly not available with any kind of reliability. Whether it’s Libya or Iraq — pick a country, pick a region of the world — there is a lot of supply capacity out there that when things stabilize in that region, there’s another new source coming.

“My view is, people need to kind of settle in for awhile. I couldn’t tell you how long that’s going to be…Geopolitically, it could change tomorrow. But when I look at fundamentals, there’s a lot of supply out there and I don’t see a particularly healthy global economy…We’re going to have to have some economic performance to increase the demand requirement in order for this thing to begin to unwind.”

ExxonMobil, the world’s largest publicly traded oil company — and the largest gas producer in North America — is prepared for the long haul. To cope, it’s reduced its capital spending plans by around 12% from 2014 to $34 billion. Even less could be spent in 2016 and 2017. Spending peaked in 2013 at $42.5 billion, when the company was initiating capital-intense projects across its global holdings that include 134 million net acres.

“The oil and gas business is cyclical, and we’ve been here before,” Tillerson said. “Our investment decisions are based on a long-term view.”

Every year ExxonMobil publishes its Outlook for Energy, the long-term view of global energy demand and supply. The most recent one, a view to 2040, was published in December and it guides the company’s strategy (see Daily GPI,Dec. 9, 2014). Things may change, but the strategy hasn’t, Tillerson noted. According to ExxonMobil, oil is expected to remain the No. 1 energy source through 2040, with demand rising by almost 30%, but global gas demand will surge 65% from 2010, the largest of any energy source, led by North American gains.

Last year, ExxonMobil produced 4 million boe/d. Plans for the next two years are to concentrate on liquids output, with growth of 7% a year through 2017. Gas production is seen falling by 2% this year and again in 2016, but should be 4% higher in 2017. By 2017, production should approach 4.3 million boe/d, based on an oil price of $55.00/bbl. Liquids and liquids-linked gas production should be around 71% of the total output by then.

By 2017, U.S. onshore liquids production should double to about 150,000 boe/d on wells drilled in the Bakken Shale, Permian Basin and Ardmore/Marietta basin areas of Oklahoma, Tillerson said.

As far as expanding North American natural gas production, ExxonMobil remains in pause mode. Plans are to retain its “very deep” lineup of projects, Tillerson said. “We have ready-to-drill well locations and the ability to respond to increase production as the market may dictate.”

Depending on commodity prices, ExxonMobil could revise its plans, either more or less, he said. Final investment decisions are being delayed for some of the mega-projects, which may include liquefied natural gas export projects worldwide. Through 2017, 24 major projects now are slated to ramp up. Included in the line-up is Hadrian South in the deepwater Gulf of Mexico, which is a subsea tieback to the Lucius spar, which is scheduled for startup in the “next several weeks” (see Daily GPI, Feb. 21, 2013).

Until last year, capital spending was “pretty intense” in the upstream portfolio because management “had a view that we needed to rebuild the future production base of the corporation. In doing so, we put in place production profiles that have different characteristics than had been our history.” Conventional volumes were in a “decline phase,” and management saw the need to “provide some stabilization going forward around cash flows…”

Maintaining the upstream options in North America for gas and for oil “remains a priority” even though the last few years have been “particularly challenging,” Tillerson said. “It was more challenging than we anticipated going into that period over five, six, seven years” regarding plans to pursue gas development. “We did not anticipate the price environment,” something he has said before regarding the sharp decline in gas prices.

“What we do about that, what we have done, is do our best to be very capital efficient and avoid the big mistakes we have seen others making, because mistakes in an overheated market become amplified and you live with them a long time. We’ve got some projects where we own that.” ExxonMobil has taken the gassy portfolio and turned it into a liquids machine.

ExxonMobil also never ramped up its onshore oil projects like some of its peers, the CEO noted. And with prices now down, it’s able to cope and continue building its base despite the environment. The company actually added onshore oil rigs during the fourth quarter (see Daily GPI, Feb. 2).

A drop in liquefied natural gas (LNG) demand kept the pressure on gas futures near the front of the curve in early trading Monday.  The October Nymex contract was down 7.4 cents to $1.974/MMBtu at around 8:40 a.m. ET. The start of annual fall maintenance at the Dominion Energy Cove Point LNG terminal has cut…