A step down in production drove natural gas futures prices higher for a second day, with gains accelerating after the latest weather models turned even hotter for next week. The September Nymex gas futures contract settled Tuesday at $4.027, up 9.2 cents on the day. October climbed 9.4 cents to $4.032. 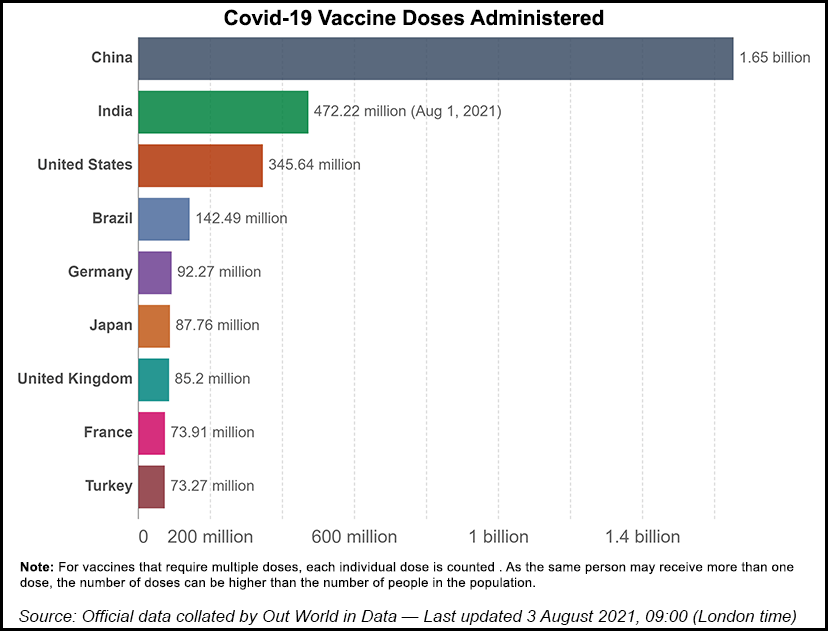 Spot gas prices were mostly higher, but there were small decreases in the Midwest and part of the western United States. NGI’s Spot Gas National Avg. climbed 8.5 cents to $4.000.

With summer heat nearing what traditionally is the peak period this month, weather forecasts have once again become a driving force for gas markets. Weather models early Tuesday changed only slightly, according to NatGasWeather. The American and European data each saw a difference of less than 2 cooling degree days (CDD) for the coming 15 days compared to Monday’s data. As important, the models remained “quite hot” with the U.S. pattern for Saturday through Aug. 15.

The midday Global Forecast System model, however, trended even hotter for next week into the following week, gaining more than 5 CDDs, NatGasWeather said. The forecast showed widespread heat building across most of the United States beginning late this weekend, aided by highs of lower to mid-90s over the East Coast and mid-90s to 102 over Texas and the South.

“This should increase power burns to 45 to 47-plus Bcf/d, an impressive amount, thereby resulting in a couple smaller-than-normal builds to finally push current deficits of 168 Bcf to near or over 200 Bcf,” NatGasWeather said.

The forecaster expects the “very warm to hot pattern” from Sunday to Aug. 15 and possibly carrying over to Aug. 16-18. However, early indications showed conditions not quite as impressively hot by then, “as weather systems find flaws in the ridge to weaken it moderately.”

Bespoke Weather Services said another factor to consider is that wind early next week is expected to be stronger than recently, but it then may back off by the end of the period. Wind penetration has been a key driver of natural gas demand for power generation, even in the current higher price environment.

Energy Aspects noted that wind generation in July averaged around 30 GW, short of its pre-month expectations by 9 GW. The firm attributed most of the miss to low wind generation earlier in the month in the Midcontinent.

Meanwhile, Tennessee Gas Pipeline (TGP) on Monday posted a notice that repairs are planned at Station 315 Unit 2A near Wellsboro, PA, requiring the unit to be offline. Previously scheduled volumes for Monday were not expected to be curtailed, but secondary in-the-path nominations were at risk for Tuesday. TGP estimated the impact of the emergent repair to be up to 150 MMcf/d.

“We do expect this to be revised up” in Wednesday’s sample “due to first-of-the-month reporting, but we still may see NEPA impacts until TGP resolves the issues at Station 315,” Wood Mackenzie analyst Laura Munder said.

On Tuesday, TGP also issued unrelated operational flow orders for zones 4-6, as well as some storage restrictions from the Bear Creek storage facility. Other maintenance events were planned later this month and into November.

On a macro level, the rising number of Covid-19 cases because of the Delta variant did not appear to be creating much concern in the gas market. Analytics firm Oanda noted that with the Delta variant being more infectious than the original strain, corporate America is addressing the ongoing reopening. Vaccination requirements by some companies and cities could derail some consumer spending going forward, it said.

“These fresh mandates should prove key in getting the remaining Americans that were on the fence to get vaccinated,” said Oanda’s Edward Moya, senior market analyst. “The country will probably still see somewhere between 20-30% Americans remain resistant to getting a Covid-19 vaccine.”

Though unclear if it is directly tied to the pandemic, Tudor, Pickering, Holt & Co. (TPH) said U.S. rush-hour congestion fell by 2% to 36% in July. The trend was lower for the first time in six months and erased gains from May and June. The trend compared to 2019 averages of 59% and the 2020 average of 35%.

Twenty-six of 40 cities tracked by TPH “softened in July,” with the biggest declines in New York, down 7%, Miami off 5% and Houston down 4%. The losses were “partly offset by notable gains in Seattle (4%), Charlotte (4%) and Jacksonville (5%),” analysts said.

Overall, the July downtick in congestion levels came as a surprise for the TPH team. The data was “a bit concerning” for gasoline demand. However, analysts said Department of Energy data showed implied demand improving from 2019 levels to minus 2% in July from minus 4% in June.

“Looking ahead, we may see a rebound toward the tail end of August associated with the back-to-school transition, but rising Delta variant cases remain a concern,” the TPH analysts said.

Despite the rise in Covid-19 cases and the ongoing uncertainty, EBW Analytics Group LLC does not expect the Delta variant to throw the U.S. economic recovery too far off course. “While the Delta variant is currently racing out of control, it is unlikely to lead to lockdowns. Further, experience in India and the United Kingdom suggests it may die off more rapidly than feared.”

Spot gas prices mounted more gains Tuesday despite relatively moderate temperatures across the country. A weather system and associated cool was forecast to impact much of the eastern half of the United States, according to NatGasWeather. This would result in high temperatures stalling in the 70s and 80s, with the coolest across the Great Lakes.

Regionally strong demand was expected over the Plains, in Texas and the West for the next several days, the forecaster said. Upper high pressure was set to bring highs of upper 80s to 110s, including 105-110 degrees across major inland California cities.

Transwestern San Juan spot gas prices climbed 7.0 cents to $3.860 amid some ongoing restrictions on the Transwestern Pipeline. Transwestern on Monday announced a force majeure that could restrict up to 145 MMcf/d of Permian Basin outflow from through Monday (Aug. 9). The restrictions were because of verification digs and pipeline remediation repairs affecting the WT-1 compressor near Carlsbad, NM.

“Capacity at the WT-1 pool point, which is a northwestern outlet for gas from the Permian, will therefore be restricted to 388 MMcf/d for the duration of the event,” Wood Mackenzie analyst Anthony Ferrara said. “Over the past 30 days, WT-1 has averaged 478 MMcf/d and maxed at 533 MMcf/d, translating to cuts of up to 145 MMcf/d.”