September natural gas futures got a boost Thursday on bullish revisions in the Energy Information Administration (EIA) storage report and hints of supply risk from tropical weather systems developing over the Atlantic. The cash market remained ambivalent, with most regional averages trading within a few pennies of even, and the NGI National Spot Gas Average finished down 1 cent at $2.67/MMBtu. 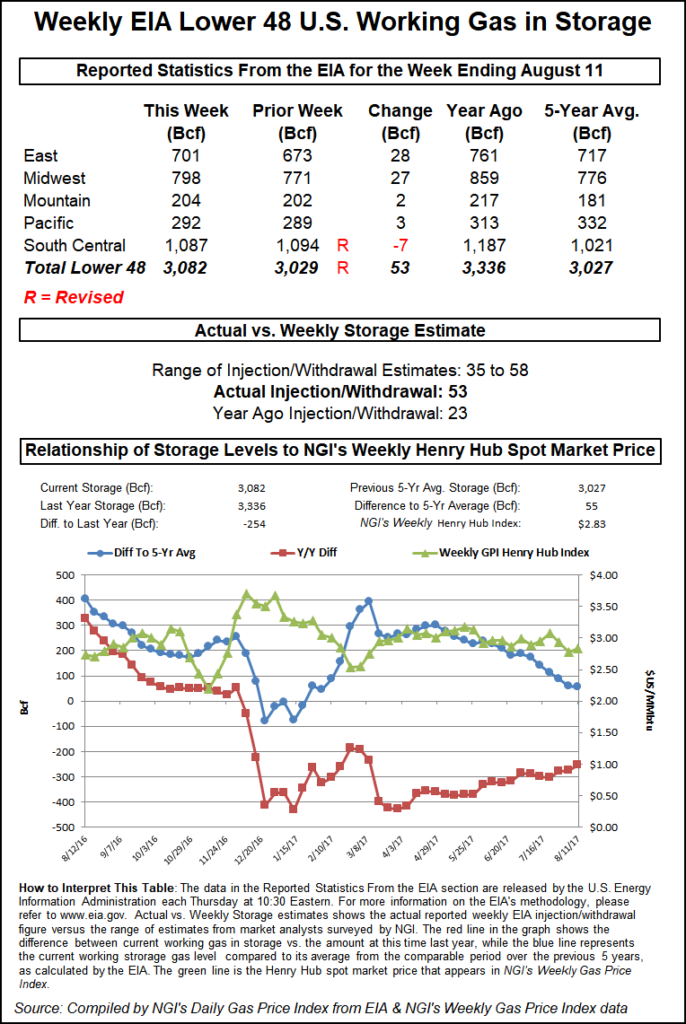 The market initially seemed unsure of what to do with EIA’s figures. EIA reported an implied 53 Bcf build for the week ended Aug. 11, higher than most estimates and 3 Bcf above the five-year average build of 50 Bcf. The minute the plump weekly injection figure went live, the September contract traded as low as $2.856, about 3 cents down from Wednesday’s settle of $2.890.

But then traders digested EIA’s revisions, which resulted in an average 10 Bcf reduction for the weeks between June 30 and Aug. 4 based on reclassifying working gas to base gas. As a result, EIA reduced the 3,038 Bcf of total working gas stocks in last week’s report down to 3,029 Bcf.

“We had the numbers come out, and it was a little bit of a whipsaw reaction when we first started,” Powerhouse Vice President David Thompson told NGI. The market eventually settled on a move higher “even though we ended with a slightly larger build than expected.”

Thompson said the downward revisions to the June 30-Aug. 4 period could have played a part, but the market may have also been factoring in weather systems developing over the Atlantic.

The National Hurricane Center has its eyes on three systems, including Potential Tropical Cyclone Nine, located a few hundred miles east of the Windward Islands, which has a high chance of cyclone formation in the next 48 hours.

“Given the low probability” of this storm creating bullish disruptions in the market “3 cents up on the day is about right,” Thompson said.

NatGasWeather.com said in a mid-day update it observed “no major changes in the most recent data, although it’s important to note weather patterns after next week are going to be highly suspect as there are three tropical waves over the Atlantic, with each having the potential to strengthen into named cyclones over the coming week, which could lead to major forecast changes in time.”

Mirroring the moderate temperatures showing up in near-term forecasts across most of the Lower 48, day-ahead trading was mixed Thursday.

MDA Weather Services said Thursday “forecast changes were in the cooler direction” for the six- to 10-day outlook, “focused with high pressure driving southward from Canada and into the Midwest and East during the second half of the period. This has temperatures averaging near normal overall in the region, with aboves early on being replaced by belows late.

“There remains some uncertainty with how cool temperatures may get under this second half feature, with most models still offering cooler forecast risks. Prior to its arrival, however, peaks near 90 degrees are forecast on Day 6 along the Interstate 95 corridor from Washington, DC, to Boston.”

In gas traded for Friday delivery, points across Texas and Louisiana showed slight losses of around a penny, while the Midwest regional average dropped 2 cents on the day. The Northeast, after outsized losses the day before, gained the most in Thursday’s trading.

The California regional average climbed 5 cents on the day to $2.82. SoCal Citygate, after giving up almost 50 cents over four successive day/day losses, gained the most Thursday, adding 17 cents to end at $2.93.

PointLogic Energy analyst Callie Kolbe said this week the issues at the Aliso Canyon storage field, in Southern California (SoCal) and the largest in the state, have tightened the spread between SoCal Citygate and PG&E this summer.

“Specifically, SoCal’s inability to fully utilize Aliso Canyon and the resulting storage deficit has resulted in more competition this year between Northern California and Southern California,” Kolbe said. “This competition has had a domino effect on cash basis at SoCal and PG&E, which has contributed to tighter spreads this August.

“Over the next month, demand across the Pacific region is expected to settle at near normal as mild temperatures are anticipated. The expected soft demand levels should place downward pressure on SoCal and PG&E. However, as both systems continue to face storage deficits, the need to source supply from outside the state could keep upward pressure at both hubs.”

The futures market was “sorting out the mixed messages” following the release of EIA’s storage numbers, Citi Futures’ Tim Evans said. “The 53 Bcf injection for the week ended Aug. 11 was somewhat more than the 48-50 Bcf consensus expectation and above the 50 Bcf five-year average for the date, and so incrementally bearish on that account.

“However, there was also a material…downward revision to prior data since June 30 as working gas was reclassified as base gas. In our view, the reclassification is a clear bullish surprise, with less working gas available to supply the market than the market had assumed.”

Despite Thursday’s gains, the prompt month contract remains stuck “in a bearish pattern and a bearish phase that we’ve been in really since May,” Powerhouse’s Thompson said. Looking ahead to winter and the January contract, Thompson said he expects prices to range between around $3.15 on the low side with an upper boundary around $3.40.

“The trend themes of late have been producers coming in and selling when they see those winter months come up around $3.40,” which in turn pushes prices down by 25-30 cents. That’s when utilities and other buyers have tended to “come in and do some nibbling,” he said.

Before the storage figures were released, most estimates called for an injection slightly below the five-year average but higher than the 28 Bcf (revised up to 30 Bcf) build reported last week.

The revisions affected the South Central region, which saw total stocks end the report week at 1,087 Bcf (283 Bcf salt, 804 Bcf nonsalt), an implied weekly withdrawal of 7 Bcf. The East saw a weekly injection of 28 Bcf to end at 701 Bcf. The Midwest finished at 798 Bcf, up 27 Bcf week/week. The Mountain and Pacific regions ended the week at 204 Bcf (plus 2 Bcf) and 292 Bcf (plus 3 Bcf) respectively.

Total working gas in storage for the week ended Aug. 11 stands at 3,082 Bcf, higher than the five-year average 3,027 Bcf but well below inventories of 3,336 Bcf in the year-ago period.