The U.S. Energy Information Administration (EIA) on Thursday reported an injection of 15 Bcf natural gas into storage for the week ended July 22. The result fell below already modest expectations, leaving Nymex natural gas futures to whipsaw in and out of positive territory as market participants tried to assess its implications. 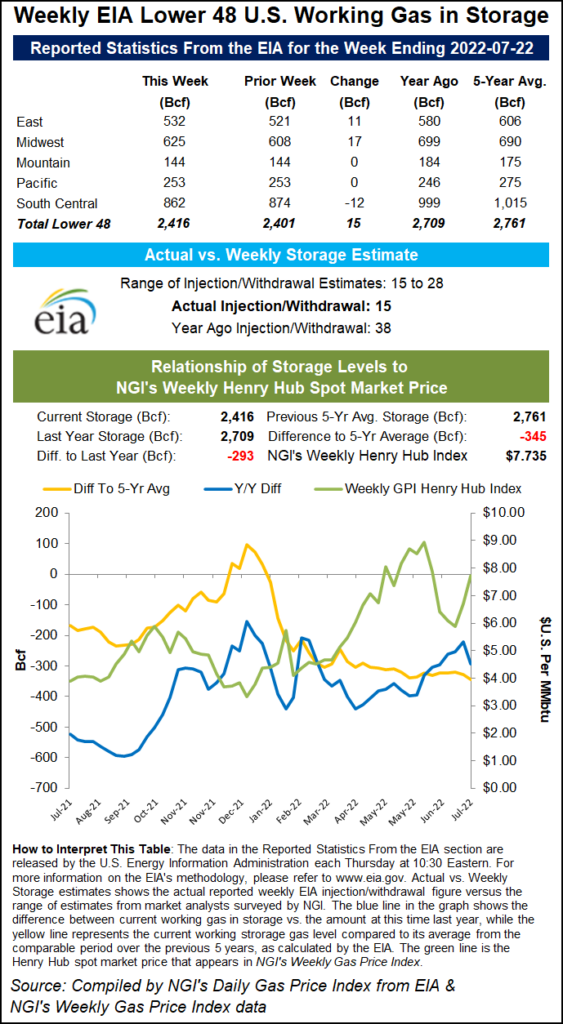 Ahead of the EIA report, the September futures contract, in its first day as the prompt month, was trading in a narrow range of gains and losses and hovered around $8.569/MMBtu.

After the print crossed the wires at 10:30 ET, the front month popped up more than 10 cents but then proceeded to see-saw again. Following another 30 minutes of erratic post-report trading, the September contract was ahead 1.6 cents to $8.570, as traders digested a weak injection that coincided with exceptionally hot weather, particularly in Texas, and choppy production.

Output had climbed to around a summer high of 97 Bcf early in the covered period, only to drop as much as 2 Bcf as the week wore on amid maintenance events.

He noted that U.S. supply got a big boost after a fire forced the Freeport LNG facility offline. The mishap freed up roughly 2 Bcf/d of gas once destined for export to be used domestically, including for storage. Had that not happened, EIA may have posted a decline in inventories for last week, he said.

“For sure, we’d be in a wild market” without the added Freeport liquefied natural gas, Bevan said.

Prior to the EIA report, major polls found analysts expecting a bullish result – with the print matching the lowest of estimates.

Results of Bloomberg’s survey showed a median injection projection of 19 Bcf, with estimates ranging from 15 Bcf to 28 Bcf. Reuters’ poll produced injection estimates that spanned 16 Bcf to 28 Bcf. It landed at a median of 20 Bcf. A Wall Street Journal poll found an average injection expectation of 23 Bcf, with a low estimate of 16 Bcf and a high of 28 Bcf.

In the comparable week last year, EIA printed an injection of 38 Bcf, while the five-year average injection is 32 Bcf.

EIA posted a 32 Bcf injection for the week ended July 15, far below estimates.

The increase for the past week lifted inventories to 2,416 Bcf, but it left stocks well below the year-earlier level of 2,709 Bcf and the five-year average of 2,761 Bcf.

The Midwest and East regions led with injections of 17 Bcf and 11 Bcf, respectively, according to EIA. Mountain and Pacific region stocks, however, were flat.

The South Central recorded a decrease of 12 Bcf. EIA reported an 11 Bcf pull from salts and a 2 Bcf withdrawal from nonsalt facilities, reflecting the intense heat in Texas and elevated cooling demand. Totals do not always equal the sum of components because of independent rounding, the agency noted.

Looking ahead to next week, Reuters’ polling found early estimates for the week ending July 29 ranged from injections of 23 Bcf to 37 Bcf, with a mean increase of 30 Bcf.

That compares with a 16 Bcf increase in the comparable week last year and a five-year average injection of 33 Bcf.