Natural gas futures on Wednesday soared more than 10 cents early, then retreated into negative territory before flattening out and edging back up at the close of trading. The roller coaster action developed amid a decline in production and estimates for a relatively light storage increase, as well as an evolving weather picture and the potential for a hurricane. 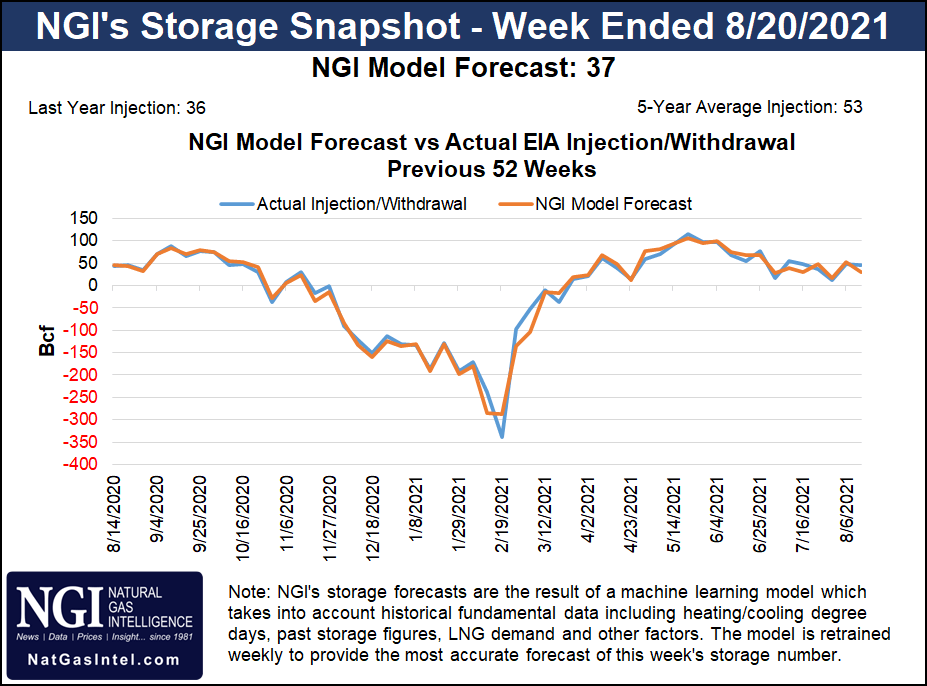 The September Nymex contract ticked up one-tenth of a cent day/day and settled at $3.897/MMBtu, following a 4.9-cent drop a day earlier. October on Wednesday advanced nine-tenths of a cent to $3.925.

NGI’s Spot Gas National Avg. jumped 15.5 cents to $4.150. Cooling demand has been strong this week and forecasts called for a bullish pattern into the coming weekend, with highs of mid-90s to 100s across the central and southern United States. Scorching heat also permeated the Southwest and parts of California, fueling cash prices.

However, temperatures are expected to soon moderate while a potentially powerful hurricane was tracking toward the United States, injecting a dose of uncertainty into trading Wednesday.

The potential hurricane could interrupt production, as well as liquefied natural gas (LNG) exports along the Gulf of Mexico (GOM), according to Bespoke Weather Services.

U.S. LNG feed gas volumes – a key driver of prices this summer – held above 10 Bcf on Wednesday and over the past week, NGI data show. Demand for domestic exports has proven robust from both Asia and Europe throughout 2021. Still, stormy conditions could impede deliveries.

“Model consensus favors the development of a hurricane in the Gulf of Mexico, with a risk to the Louisiana or Texas coastline, placing all major LNG facilities at risk of an impact next week,” Bespoke said.

The National Hurricane Center (NHC) said Wednesday a low-pressure system in the Caribbean would likely evolve into a tropical depression or tropical storm by this weekend and may become a hurricane next week. The NHC said it presented potential concern from Mexico to the Gulf Coast.

The storm could bring chilly winds and dampen cooling demand, offsetting production interruptions, Bespoke said. The firm also noted that forecasts for next week showed a shift toward cooler temperatures in early September.

“We do still see a decline back toward normal, or even below the five-year normal, as we move beyond the opening of September,” the firm said.

However, Bespoke said it “was likely a temporary cooldown” and that September overall is still expected to prove relatively warm.

The declines were focused in Texas, New Mexico and Wyoming, and they coincided with pipeline notices indicating capacity restrictions, Wood Mackenzie analyst Laura Munder said. She noted a series of locations on the El Paso Natural Gas (EPNG) system showing signs of impact following a force majeure on the pipeline’s Line 2000 earlier this month.

In the meantime, summer temperatures were soaring Wednesday and were expected to remain elevated through the end of the trading week across much of the Lower 48. Such conditions have prevailed most of the summer.

A Wall Street Journal survey found estimates from 38 Bcf to 44 Bcf and an average of 41 Bcf. NGI estimated a build of 37 Bcf.

The predictions compare with a 45 Bcf increase a year earlier and a five-year average build of 44 Bcf. The EIA is scheduled to release its latest inventory data at 10:30 a.m. ET Thursday.

In addition to western heat, NatGasWeather said strong high pressure continued across the central, southern, and eastern United States on Wednesday, with “very warm to hot highs of upper 80s to 100s.” Heat is predicted to persist through Friday’s trading, providing support for near-term cash prices.

While high temperatures are expected to hover in the 80s and 90s next week over the southern United States, NatGasWeather said the latest outlook “favors national demand fading to seasonal levels mid next week and beyond as the hot upper ridge weakens and perfect highs of 70s to 80s sets up across the northern and eastern U.S.”

Anticipated tropical rains could minimize cooling demand in states near the GOM next week as well, the forecaster added, presenting a wildcard for natural gas demand and prices.

The storm, expected to track into the GOM as soon as this weekend, could “strengthen into a hurricane as it approaches Texas or Louisiana next week,” NatGasWeather said. “There’s likely to be a huge range of impacts if this hurricane comes to fruition, highlighted by demand killing rain, wind and cooling, but also with the potential to disrupt LNG feed gas/cargoes and decrease U.S. production.”

EBW Analytics Group said national cooling demand was forecast to peak Wednesday at 13.9 cooling degree days (CDD) before falling under 7.0 CDDs in the first half of September. While next month could prove warmer than historical averages, it was still bound to cool notably from summer highs.

“Retreating warm anomalies and cooling normals with the progression into early fall could cause power sector gas demand to sink 7.5 Bcf/d by the third week of September — and over 10.0 Bcf/d by the first week of October,” the EBW team said. “It is also possible that amplified seasonality since the onset of the pandemic, tropical storm development, or evidence of increased gas-to-coal switching capability at lower electricity demand levels could add to bearish risks.”