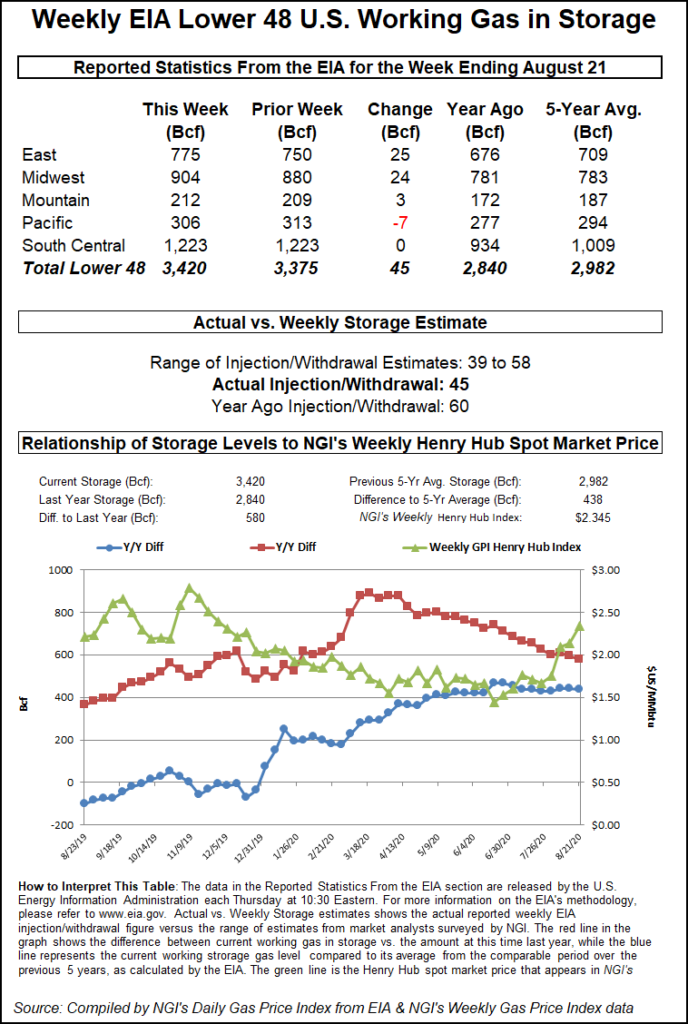 With production still curtailed and a tighter government storage stat in hand, traders lifted the expiring September contract up 11.8 cents to $2.579. October jumped 13.6 cents to $2.710.

There’s no doubt gas traders were up early Thursday as they looked for insight into Laura’s wrath. The National Hurricane Center said the hurricane made landfall at 1 a.m. near Lake Charles, LA, packing 150 mph winds. It was downgraded to a tropical storm by midday as it moved inland, with further weakening expected.

Bespoke Weather Services, noting the sell-off ahead of the storm on Wednesday, said “prices — just as they have been doing lately after any little dip — roared back, regaining the sell-off and much more.”

Cameron LNG took a direct hit from the storm, and management mobilized the damage assessment and recovery team to access the site once local authorities deemed it safe to do so. The LNG terminal shut down and evacuated all personnel ahead of Laura’s landfall. Sabine Pass LNG had done the same on Tuesday, and the eye of the storm ultimately missed the terminal by one mile.

Analysts see demand from the Gulf Coast facilities returning within a week or two, barring any damages, with further gains later in September, October and through the winter. Bloomberg data showed seven vessels floating in the Gulf of Mexico (GOM) Thursday, an increase from the four that were seen Wednesday. More were headed toward the GOM.

The bullish outlook is already reflected in Nymex pricing, with the November contract closing in on the $3.00 mark on Thursday and the full winter strip (November-March) sitting at $3.176.

However, EBW Analytics Group cautioned that Laura’s impact on the gas market depends on several other factors as well, including how quickly shut-in production is brought back online and potential damage to natural gas pipelines and processing plants. The extent of power losses in Louisiana, Arkansas, East Texas and other states through which the storm passes also stands to weigh on gas prices, as does the duration of shut-downs at refineries and petrochemical plants, which use large amounts of electricity and natural gas.

“If the pipeline network remains intact, most shut-in production is likely to be restored quickly,” EBW analysts said. “If this occurs, demand losses due to the storm are likely to significantly exceed lost supply, potentially creating downside price pressure.”

The most significant uncertainty, though, relates to Sabine Pass and Cameron, EBW said. If the terminals are shut down for an extended period, it could have a major impact on gas prices next month.

Meanwhile, global gas prices also remain a force to be reckoned with. Nymex futures have enjoyed quite the rally this month, riding on the coattails of surging European gas prices. However, with some divergence in pricing in recent sessions, U.S. LNG export arbs are wide open for 2021, for both committed and uncommitted cargoes, according to Tudor, Pickering, Holt & Co. (TPH) analysts.

“This suggests U.S. LNG should be able to return to full utilization,” the TPH team said.

However, the price curves stand in stark contrast to the analysts’ global LNG supply/demand fundamentals, which suggest U.S. curtailments would be necessary again beginning in May 2021. TPH sees global oversupply peaking at 4-5 Bcf/d next spring and uncommitted curtailments not being sufficient to balance the market.

“This means the positive committed export arb of around $1/MMBtu would need to close,” TPH analysts said.

While the details are still emerging, Laura undoubtedly will leave her mark on domestic demand as the strong winds knocked out power for hundreds of thousands of residents in Southeast Texas and Louisiana on Thursday.

The duration of the outages, and the amount of heat that returns to the region in the coming days, create more uncertainty for Lower 48 storage. On Thursday, the U.S. Energy Information Administration (EIA) reported a 45 Bcf injection into natural gas storage inventories for the week ending Aug. 21, a figure that was right in line with consensus but below the year-ago and five-year average builds.

No net change was seen week/week for South Central inventories after salt facilities withdrew 1 Bcf and nonsalts added 1 Bcf. Salt stocks are now at 334 Bcf, and maximum capacity is in the range of 400 Bcf.

Elsewhere, the East reported a 25 Bcf injection, while the Midwest added 24 Bcf, according to EIA. Mountain region stocks rose by 3 Bcf, and the Pacific withdrew 7 Bcf.

Total working gas in storage was 3,420 Bcf, 580 Bcf above year-ago levels and 438 Bcf above the five-year average, according to EIA.

Bespoke, which had called for a much larger 50 Bcf injection, said the EIA figure was “notably tighter” balance wise than last week’s number revealed. The miss may be attributed to lower wind generation and/or perhaps higher nuclear outages.

“Either way, the magnitude of the rally was a little surprising to us, especially with European prices actually down a fair amount,” Bespoke chief meteorologist Brian Lovern said. “This sort of action sometimes happens on expiration days, however, so we do not read much into it just yet.”

The market, he said, does seem “quite sold” on the bullish case, which is understandable for winter. “The front is still a different world. If weather does not stay bullish, or LNG does not keep moving higher rather quickly, we still feel we may be moving too far, too fast. Time will tell.”

In the Southeast, most markets posted small gains of only a couple of cents, while Dominion Energy Cove Point tumbled 23.0 cents to $2.015, a move that was closer in line with other East Coast markets.

Lower prices also were seen on the West Coast, with SoCal Citygate leading with a 57.0-cent decline to $4.040.