“I think the government is taking an incorrect measure that will slow down the use of natural gas in the country,” said Francisco Barnés in reference to the recent proposal by Mexico Energy Ministry Sener to require natural gas users to buy from state entities. 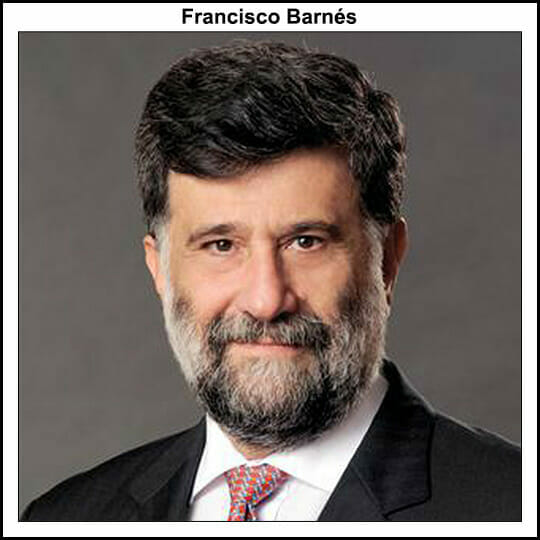 “It’s going to make the use of natural gas more difficult and more expensive, and I think it will generate more antipathy in the private sector towards a state monopoly,” he told NGI’s Mexico GPI in a phone interview from Mexico City. “It will mean more restrictions, costs and complications in the natural gas industry.”

Barnés, who served as a Comisión Reguladora de Energía (CRE) Commissioner and General Director of the Mexican Petroleum Institute during his decorated career, added, “I see this as a serious strategic error.”

Barnés served as a CRE commissioner from 2004-2014, was the deputy secretary of hydrocarbons at Sener and was the General Director of the Mexican Petroleum Institute from 1995-1996. He also served as the rector at Mexico’s Universidad Nacional Autónoma (UNAM) from 1997-1999 and was on staff at the university from 1973-2015.

Barnés: I think a new strategic plan should focus on a few distinct paths. One is to increase domestic production of natural gas. We have to reduce the increasing dependence that we have on one supplier, which is of course the U.S., from where we import around 70% of the gas that is consumed in Mexico. And if we removed the production that Petróloes Mexicanos (Pemex) consumes itself, Mexico imports around 90% of its natural gas supply for all other consumers, including the Comisión Federal de Electricidad (CFE).

Mexico continues to be a country that is extraordinarily dependent on hydrocarbons consumption for its energy matrix, and around 90% of the national energy consumption is derived from hydrocarbons, which includes liquid fuels and of course natural gas, which has been increasing. We depend on natural gas more than any other hydrocarbon for power supply. This dependency on one supplier of course increases costs and creates strategic risks when supply is sourced solely from the U.S.

The current government has committed to a plan of national energy sovereignty by producing more liquid hydrocarbons and by putting national electricity generation in the hands of the state. But, at the same time, all of the natural gas that we need to generate electricity is imported, and that dependency is going to continue to increase. So the country urgently needs a new natural gas strategy that includes an increase in domestic production to reduce dependence on the United States.

NGI: In your opinion, should Mexico shift its commitment from oil production to develop more natural gas?

There are several opportunities that could be developed, such as the Burgos basin and in the southeast basins, and the truth is that in the short, mid and long-term, there are unlimited regions where natural gas could be produced.

It’s also well understood that, where there is access to natural gas, there are opportunities for economic development. In the regions where there is production and distribution of natural gas, there are more dynamic local economies, opportunities and jobs. If natural gas production was considered fundamental and was part of the country’s strategic planning, many of the regions where economic development has lacked would benefit in the short, mid and long-term. As is well known, with natural gas pipeline development and the availability of combined cycle plants, regions of the country where natural gas supply is limited, such as the Yucatan peninsula, Acapulco or Salina Cruz, could experience ample economic growth.

NGI: What are other areas of the Mexico natural gas industry that need improvement?

Barnés: Storage. The amount of available storage in Mexico is ridiculously small. Two of the three liquid natural gas reception terminals that we have for regasification for liquefied natural gas (LNG) in the country, only two of them are connected to the national pipeline system, which are the terminals in Manzanillo and Altamira.

The amount of storage available in the country is only for a few hours, meaning that in the event of an emergency or contingency, Mexico is at risk and must depend on supply from the U.S., which can be economically damaging. If we had a large volume of subterranean storage, it would allow us to buy natural gas from the US in the summer, when prices are lower, and use it in the winter, when prices in the US are higher, and reduce the risks of our dependency on our only source of gas supply in case of a longer disruption.

Mexico has already identified the opportunities where natural gas could be stored in salt caverns that would give the country two or three weeks of storage to be able to respond to our needs in case of another emergency or serious contingency situation similar to the freeze in Texas last year.

[Demand Shift: Most of the energy industry focuses on increasing Waha takeaway capacity to the Gulf Coast, but what about west toward California and south to Mexico? NGI’s Patrick Rau looks at how diverting Permian supply could impact the price of natural gas out of West Texas. Listen now.]

NGI: One issue that has dominated conversation in the sector in the last weeks has been the announcement by Sener that users that wish to buy the supply of natural gas are going to have to do so from state companies, such as the CFE. In your opinion, what type of impact could this regulation have on the Mexican energy sector?

I think the convenient strategy would be that all the capacity that CFE and Pemex have contracted in the interconnected natural gas pipelines with Cenagas that has not been used, should be made available through Cenagas to third parties. Thus Cenagas could administer this unused capacity so that it could be contracted by any supplier, vendor and user that wants to use it. Those potential users shouldn’t be obligated to buy gas from Pemex or the CFE because that is anti-constitutional. Pemex and CFE should compete with other vendors for the supply of the gas.

The proposed regulation goes against existing laws and goes against a policy that supports economic development or competition which would assure the capacity is used as quickly as possible. What is currently proposed puts the CFE in a position to obligate users to put their faith in and depend on one sole provider, which is a state monopoly that is unlikely to be the cheapest or the most efficient option. Instead of advancing the industry in the right direction, we are now headed in the direction where we lose as a country and create more problems on top of those that we already have. It will scare away future investment and complicate present investment.

NGI: You mentioned how this new proposal by Sener would impact prices. How do you think the price environment for natural gas in Mexico would be affected?

Barnés: If the only price offered is from the monopoly company of the state, then it’s whatever price they set, plus all of the other official transportation costs, plus the margin of the vendor that is established to better the commercial interests of the monopolistic company. And they can set that margin as high as CFE and Pemex wants to put it.

When Pemex was the only vendor to Cenagas, they only offered elevated costs simply because they could, because there wasn’t competition in the market. The reality is that, if CFE competed in an open market, their clients would be far more committed, stable and loyal than to a monopolistic company that imposes the prices and rates.

So, I see this as a serious strategic error.

NGI: You mentioned that the proposal Sener made to Cenagas is anti-constitutional. So, is it legal?

Barnés: No. It’s not legal. It goes against what is established in the Mexican Hydrocarbons Law.