Mexico aims to auction blocks of unconventional resources “sooner rather than later” to unleash the potential of shale and tight oil and gas in the northern part of the country, officials said last week. 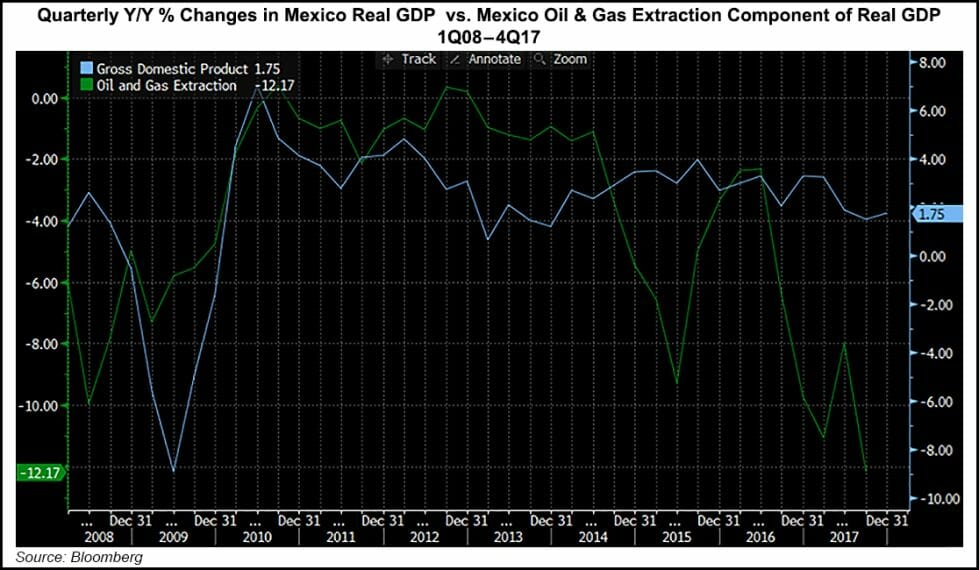 At a government-sponsored forum in the border town of Reynosa, Tamaulipas, Mexican officials said unconventional resources are heavily concentrated in the Tampico-Misantla and Burgos basins, and they may in fact be considerably greater than in the Texas portion of the Eagle Ford Shale, which extends into northern Mexico.

A proposed auction aims to test the waters for developing unconventional resources after 14 years of conventional crude production, which peaked in 2004 at 3.38 million b/d but dropped to less than 2 million b/d last year.

“The technical team at the ministry is already working on the terms and conditions,” a source at the Mexican Energy Ministry (Sener) told NGI’s Mexico GPI. “If things go well we could be talking about three to five weeks to issue the invitation for bids. For the auction itself we could be looking at September.”

The auction is the third for unconventional resources to have been announced by the Mexican authorities. Rounds One and Two, which were to have been held as part of the sweeping 2013-14 energy reform, the first upstream auctions in almost eight decades of state monopoly, both were canceled, largely because of a lack of regulations to cover the technical and ecological framework for practices such as hydraulic fracturing.

In this go around, Mexico officials hope the third round is the charm, as everything — at least almost everything — is in regulatory order.

Presidential elections are slated in Mexico for the beginning of July, and the inauguration of a successor to President Enrique Pena Nieto, author of the reform, is to be inaugurated Dec. 1.

So far, the leading candidate, with a double-digit lead, is Andres Manuel Lopez Obrador, regarded as a fierce opponent of PeÃ±a Nieto and of the energy reform. However, Lopez Obrador is now making his third bid for the presidency, and political analysts note that he has mellowed with age.

What’s more, if he does win the election, Lopez Obrador will need all the economic support he can muster, Pablo Zarate, told NGI. Zarate is a director of the Pulso Energetico think tank, which is backed by AMEXHI, the independent Mexican association of hydrocarbon companies, which is benefiting from the reform.

“The rest of the country’s economy is almost stagnant, while the energy reform is generating billions of dollars,” Zarate said.

Meanwhile, Mexico Energy Secretary Pedro Joaquin Coldwell has insisted that the current administration will keep pushing to advance the reform until its final breath.

The new emphasis on unconventional resources will “turn the oil industry map of Mexico upside down,” said Hector Moreira, a member of the National Hydrocarbons Commission, the nation’s upstream regulator. He spoke at the Reynosa forum.

The oil boom that turned Mexico into a major producer in the 1970s was heavily concentrated in the southern states that included Tabasco, Chiapas, Tabasco and offshore in the Sound of Campeche in the southern Gulf of Mexico.

The petrochemicals industry controlled by state company Petroleos Mexicanos (Pemex), then a monopoly, was concentrated in and around the port of Pajaritos.

Now, several of the Pemex loss-making petrochemicals plants have had to close. Worse still, a joint venture between Pemex and Mexico City-based Mexichem SAB de CV has foundered after an explosion almost two years ago in the vinyl chloride monomer plant that they controlled in Pajaritos. The blast killed 32 people and injured close to 100 more.

The private-sector petrochemicals cluster in the port of Altamira, in Tamaulipas, has now overtaken Pajaritos in importance, Moreira said. And the biggest development in infrastructure, the construction of natural gas pipelines to handle massive imports from the United States, is likewise concentrated in northern Mexico.

Moreira’s intervention was of particular interest to the Mexico audience in attendance, occasionally providing a breath of fresh air with questioning in the style of a town-hall gathering.

What nobody mentioned, however, was the remarkable military presence that surrounded the sessions, with heavily armed members of the Mexican armed forces in full battle gear.

On each day of the forum, the Reynosa daily El Manana reported gun battles between the military and gunmen, believed to be member of organized criminal gangs.

There was very little information on the numbers of casualties, but Saturday’s issue of El Manana said that a young mother and her child were killed in their car amid crossfire during a chase on Friday as soldiers pursued gangsters.

Reynosa, which has a population of just under 700,000 inhabitants, is the largest city, though not the capital, of Tamaulipas.

Tamaulipas is one of five Mexican states that the U.S. State Department has issued its most severe travel warning. The warning on Tamaulipas said bluntly: “Do not travel due to crime,” it said. “Local law enforcement has limited capability to respond to violence in many parts of the state.”

The State Department warning appeared to explain a lukewarm response to the Reynosa forum by potential investors.

However, a Mexican official, while admitting that crime is a major problem in Reynosa and elsewhere in the state, told NGI’s Mexico GPI: “The murder rate is much higher in New Orleans than it is in Reynosa. Just you check that.”

See all of Mexico’s key unconventional plays and keep track of all the pipeline activity in North America with the recent release of NGI’s 2018 Map of Shale/Resource Plays & North American Natural Gas Pipelines. The map features the location of 154 operational pipelines with 155 market points, 41 proposed pipelines, 69 liquefied natural gas import/export terminals, 45 U.S. border import/export points, and much, much more.