Mexico’s energy ministry (Sener) has issued guidelines for landowner royalties that oil and gas companies must pay out for upstream projects with commercial production. 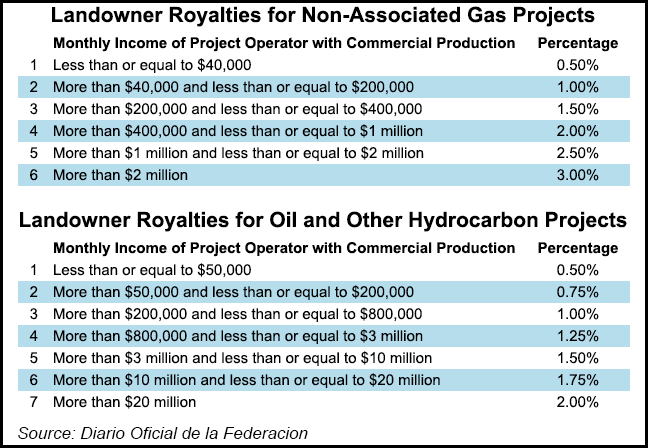 Under Mexican law, all individuals or communities that hold title to property in an area with a commercially producing oil and gas project are entitled to receive a percentage of the cash flow generated by that asset.

To date, the Mexican government has signed around 50 contracts for onshore blocks, although only a few have reached commercial production.

“These rules are a really important development for the issue of local communities, something that recently came up with the new shale fields” for the upcoming Round 3.3, the first Mexican auction to include unconventional blocks, Gonzalo Monroy told NGI’s Mexico GPI. He is managing director of Mexico City-based consultancy GMEC.

“The new payment rules will be crucial because if they wind up working well and you can show that there are real, tangible benefits to landowners, then it would be a huge step toward fulfilling people’s expectations for the energy reforms. That, I think, will be really relevant for the contentious moment that Mexico is passing through as we approach the election.”

Mexico’s presidential election is set for July 1. The current leader in the polls, Andres Manuel Lopez Obrador, is a fierce critic of the 2013-2014 energy reforms, which ended the decades-long monopoly over the upstream sector by state-owned Petroleos Mexicanos (Pemex).

The reforms included a provision stating that upstream operations, because of their strategic value to the country, would take precedence over all other economic activities in areas that are open for exploration and production (E&P). E&Ps, in turn, would have to compensate landowners for use of their property.

As part of their compensation, tenants may demand a share in a project’s income when it reaches commercial production, provided that they can produce a title document to land within the extraction area. If accredited, the claim can last until the project ceases to be economically viable.

The Sener guidelines, which were published on March 16 in the Diario Oficial, the Mexican equivalent of the Federal Register, outlined payment procedures and established obligations for both landowners and E&Ps.

Under the rules, the revenue share that landowners receive is tied to the monthly income generated by the project, after the operator discounts royalties and other payments it must make to the federal government.

Most, if not all, onshore contracts subject to the revenue-sharing rules are structured as license contracts, where the operator pays a base royalty indexed to international oil prices, plus an additional royalty determined through competitive bidding.

The minimum revenue share for landowner payments is 0.5% when the final monthly income is less than $40,000 in the case of a non-associated gas project, or less than $50,000 for oil and other hydrocarbons. For non-associated gas, the maximum share is 3% when a project generates more than $2 million/month. For all other projects, the cap is set at 2% when the income stream exceeds $20 million/month.

The total royalty amount derived from these percentages is to be distributed among all landowners in the extraction area on a proportional basis, determined by the surface area covered by each property title.

The Sener payment rules do not apply to Pemex projects already in production before the reforms took effect. They also exempt the E&P blocks that Pemex was assigned at Round 0 in 2014, before the government began auctioning areas to private and foreign companies.

Landowners on the Round 0 blocks, known as an asignaciones, are thus not entitled to receive payments when a project achieves commercial production — one of the more controversial aspects of the new rules, according to Monroy.

“It could be that somewhere you have a contractual area belonging to a private operator and then just across the river there is a Pemex asignacion,” he said. “You would be paying landowners in one area but not in the other, which could generate a lot of conflict within communities at the local level.”

E&Ps are required to enter into contracts with landowners that establish forms of payment and other terms and conditions for the revenue-sharing arrangement. Payments can be made via direct deposits in pesos, commitments to execute development projects that benefit the community or any other form of payment permitted under Mexican law.

Operators are obligated to notify accredited landowners when a project reaches the commercial stage. Per the Sener rules, commercial production commences when the upstream regulator approves a project’s development plan and the operator presents its first monthly income report to the Fondo Mexicano del Petroleo, the sovereign oil fund that receives and manages royalty payments to the federal government.

Few of the onshore areas awarded in Mexico’s bidding rounds have reached the commercial stage, and their current production is minimal.

The payment rules would also apply to Pemex farmouts and contract migrations to the new legal regime created by the reforms, although Monroy notes that the rules are somewhat unclear.

“There’s a gap in the regulations because, as it clearly states in the new rules, property owners on blocks assigned during Round 0 are not eligible to receive this kind of compensation,” he said. “But if Pemex decides to hold a competitive process and select a partner for a block, it’s no longer considered an asignacion; it has become a contractual area. That part [of the rules] could be open to interpretation further down the road and possibly cause headaches for communities and for companies.”

To date, Pemex has signed farmout agreements for two onshore areas, Cardenas Mora and Ogarrio, mature fields in southern Mexico. Cardenas Mora produced 5,094 b/d of crude and 16.9 MMcf/d of natural gas in January, while output at Ogarrio averaged 6,301 b/d and 20.7 MMcf/d, according to data from energy regulators.

The state company has also migrated two onshore blocks. Both are from the 22 oilfield service contracts that Pemex signed with private partners prior to the reform.

The Santuario-El Golpe project, a mature field in Southern Mexico, produced 6,155 b/d and 5.3 MMcf/d in January. The Mision block, a dry gas-rich area in the northeast, averaged 60 MMcf/d for December.