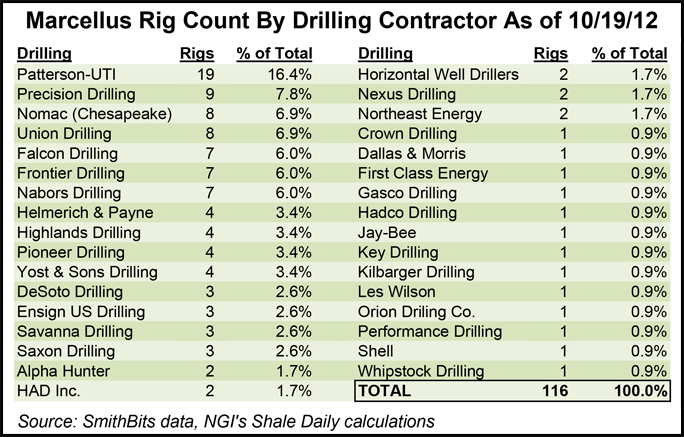 Seneca, which recently converted one drilling rig in Lycoming County, PA, to LNG, said it plans to covert a second rig in Pennsylvania next month. They will be the first 100% LNG-fueled drilling rigs operating in Pennsylvania’s Marcellus, according to Seneca. The company also plans to deploy a third rig running on both diesel and natural gas during this fiscal year.

“The use of alternative fuels, such as LNG and eventually field gas (natural gas produced from local wells near the drill pad), is just one step in a broader strategic plan to expand the use of natural gas in our drilling program,” said Seneca President Matthew D. Cabell. “This change will help reduce our environmental footprint and it is also economically beneficial.”

The conversions will help lower emissions, and cost savings could be as high as 65%, Seneca said.

In a related move also announced Thursday, Prometheus Energy Group Inc., which supplies LNG to the industrial sector, said it has entered into a long-term master agreement with Seneca to supply LNG and related equipment and services for Seneca’s initiative to utilize natural gas in its drilling operations.

Seneca had 263 permitted wells in Pennsylvania’s portion of the Marcellus during the first six months of the year, according to a biannual production report by the state’s Department of Environmental Protection (see Shale Daily, Aug. 27). Seneca has an estimated 755,000 net acres in the Marcellus, more than any company except Chesapeake Energy (1.78 million net acres) and Shell (850,000 net acres), according to company reports (see Shale Daily, Sept. 21). The company recently said it is proceeding with drilling operations in the Marcellus and Utica shales, and has established positions in oil fields in Kansas and California (see Shale Daily, Oct. 1).

A total of 116 rigs were operating in the Marcellus as of Oct. 19, according to Smith Bits data. The most active contractor in the play is Patterson-UTI, with 19 rigs, followed by Precision Drilling (nine rigs), Normac (eight rigs) and Union Drilling (eight rigs).