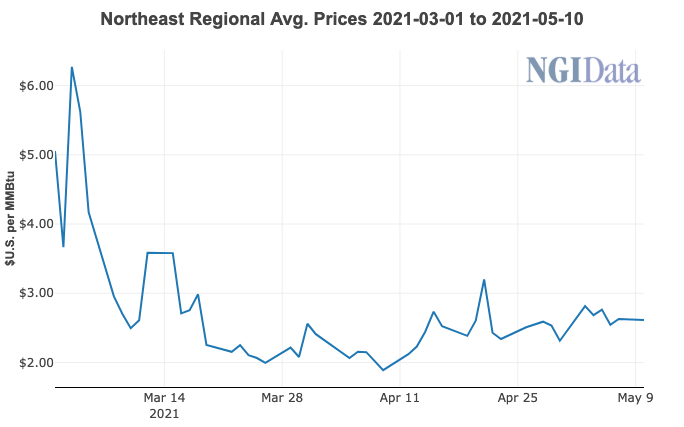 The bulk of the production gain came from the Eastern Development Area (EDA), which includes Tioga County. Net production increased by 21.2 Bcf year/year to 50.2 Bcf in the EDA, while volumes from Seneca’s Western Development Area in northwest Pennsylvania  increased 4.6 Bcf to 31.3 Bcf over the same time. The company was most active on the western side of the state, however, bringing online 13 wells in the WDA during its second quarter.

“Our operations team did a great job turning these recent wells online a few weeks ahead of schedule, allowing us to accelerate production during the winter months, capturing premium winter pricing,” said Seneca President Justin Loweth. He took over for John McGinnis, who retired earlier this month.

Loweth said Seneca’s production would decline over the remainder of the fiscal year, which ends in September. The company drilled 14 new wells during the second quarter, but both NFG’s FM100 expansion project and Transcontinental Gas Pipe Line Co.’s Leidy South project are expected to come online by the end of the year.

“As we approach the online date for Leidy South and the winter heating season, we expect to accelerate our completion operations, and we plan to delay turning in line most of these new wells until early fiscal 2022 coinciding with the expected in-service date of our new capacity,” Loweth told analysts during the quarterly earnings call last week.

Construction started on FM100 in March, which would boost natural gas takeaway capacity between Seneca’s producing assets in northwestern Pennsylvania and the New York City area. It would modernize a portion of NFG’s existing pipeline system and create 330,000 Dth/d of incremental capacity. The Leidy South project, which was cleared for full service by the Federal Energy Regulatory Commission earlier this year, would also move about 600 MMcf/d from Pennsylvania to markets along the East Coast.

Management said it remains bullish on natural gas prices headed into the winter given where storage inventories are, strong liquefied natural gas exports and near record cross-border U.S. deliveries to Mexico.

Seneca’s average second quarter realized natural gas, after the impact of hedging and transportation costs, was $2.28/Mcf, up from $2.12/Mcf in the year-ago period amid colder weather and stronger demand during the period.

NFG CEO David Bauer also told analysts during the call that the company is in the process of developing a plan to reduce its overall carbon footprint. The utility segment announced a plan during the quarter to cut greenhouse gas emissions across its delivery system from 1990 levels by 75% by 2030 and by 90% by 2050.

“This plan will include establishing credible emissions reductions targets for our midstream and upstream businesses as well as enhancing our sustainability disclosures” to include additional climate-focused information, Bauer said.

NFG reported consolidated second quarter net income across its upstream, midstream and downstream segments of $112.4 million ($1.23/share), compared with a net loss of $106.1 million (minus $1.23) during the year-ago period.