Seneca Resources Co. LLC is increasing drilling and completion activity in anticipation of two Appalachian pipeline expansions that are expected to come online by the end of the year. 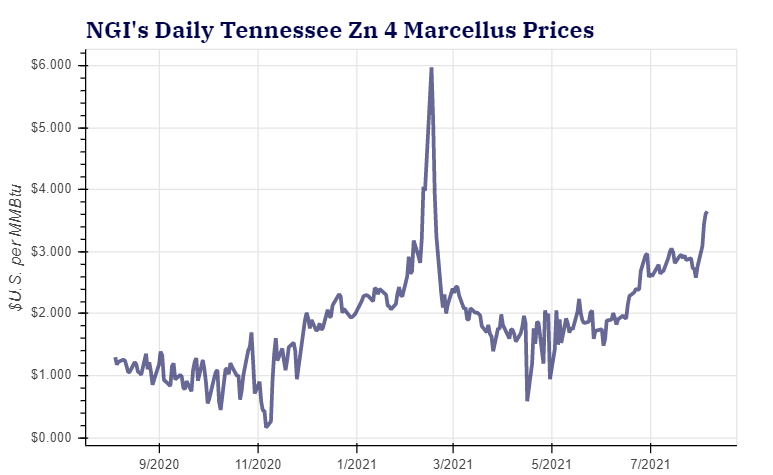 “For the remainder of the year, we are on track with our plans to ramp up production to fill Leidy South and capture premium winter pricing,” said Seneca President Justin Loweth during a call on Friday to discuss the company’s fiscal third quarter results.

Seneca, the upstream subsidiary of National Fuel Gas Co. (NFG), expects production to increase in fiscal 2022 given the ramp. The takeaway capacity and rising U.S. natural gas prices are also expected to benefit the company’s price realizations next year. NFG boosted its financial guidance this year and next on the tailwinds, with consolidated earnings in fiscal 2022 expected to be 12% higher than 2021.

Transcontinental Gas Pipe Line LLC’s Leidy South would carry about 600 MMcf/d from Pennsylvania to Atlantic Seaboard markets. Partial capacity on the system was brought online late last year. NFG’s FM100 project, which would boost takeaway capacity between Seneca’s producing assets in northwestern Pennsylvania and the New York City area, is also expected to come online by the end of the year.

Seneca released preliminary fiscal 2022 guidance and now expects to produce 335-365 Bcfe, which would be 25 Bcfe higher than the midpoint of guidance for 2021.

“We have begun the process of accelerating our completion pace and now have two active completion crews, which is a level of activity we expect to continue throughout the first half of fiscal 2022,” which begins in October, Loweth said.

Most of Seneca’s new production is expected to come online toward the end of the current fiscal year and into the first half of fiscal 2022.

NFG’s consolidated capital expenditures are also expected to fall next year to a range of $640-760 million, or $90 million below the midpoint of 2021 guidance. NFG said the decline would primarily be driven by lower costs in its pipeline and storage segment after FM100 is completed.

CEO David Bauer said the company has three-quarters of its fiscal 2022 Appalachian production volumes hedged. He stressed that the company has long had a disciplined hedging program as Appalachian producers have faced questions this earnings season over their failure to lock in higher prices. Producers in the Northeast have battled through basis volatility on pipeline outages this year and some have been more conservative in their hedging strategies to protect against the downside.

“The goal of that program is to be between 50% and 80% hedged at the beginning of the fiscal year, and we typically layer in those hedges over the preceding three to five years,” Bauer said. “Our fiscal 2022 hedging program is right on track with those targets through a combination of physical firm sales and financial instruments.”

Seneca, which also has oil assets in California, produced 83.1 Bcfe during the fiscal third quarter, up 48% from the year-ago period. The producer attributed the sharp increase to its acquisition of 450,000 net acres in Pennsylvania from Royal Dutch Shell plc last year.

Including hedges, Seneca’s average realized natural gas prices in the third quarter were $2.20/Mcf, up 28 cents from the year-ago period. Average oil prices, including hedges, also improved by $8.52/bbl over the same time to $59.22/bbl.