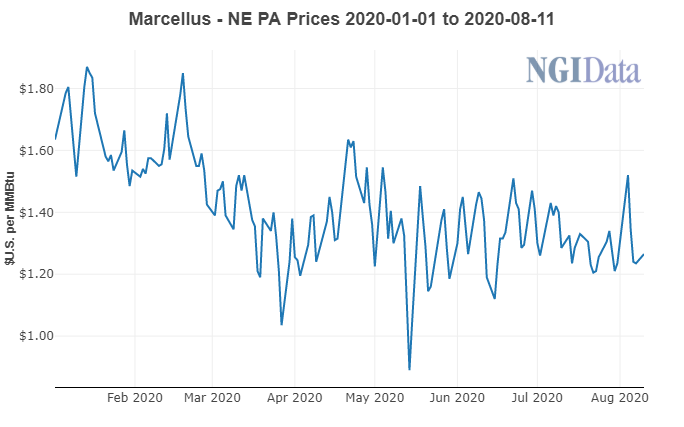 Seneca Resources Co. LLC cut its drilling program to one rig in June and continues to curtail Appalachian spot market production as it has for most of its fiscal year because of low natural gas prices.

The company still produced 56 Bcfe during the quarter, up 1.3 Bcfe from the year-ago period. The gain was primarily related to production from new Marcellus and Utica shale wells.

NFG also released preliminary fiscal 2021 guidance, indicating Seneca should produce 305-335 Bcfe, or 77.5 Bcfe more than in2020. The gain is expected to be driven by new acreage acquired in western and north-central Pennsylvania from Royal Dutch Shell plc. Given the decline in Seneca’s activity this year, both in Appalachia and Kern County, CA, where it has legacy oil operations, capital expenditures for the exploration and production segment are expected to be $290-330 million next year, or $75 million less than this year.

Average realized natural gas prices, including hedges, declined by 44 cents from a year ago to  $1.92/Mcf.

NFG reported consolidated 3Q2020net income, which also includes results from the midstream and downstream segments, of $41.3 million (47 cents/share), which included a $13.2 million after-tax impairment on the value of oil and natural gas properties. That compares to net income of $63.8 million (73 cents) in the year-ago period.

Demonstrating the divergent paths leading operators have taken in the Appalachian Basin this year in response to consistently low gas prices, Montage Resources Corp. said its second quarter production came in at the high-end of its forecast.

The company reported volumes of 551.7 MMcfe/d for the period, which came in above the midpoint of the guidance range because in June it returned production that it had curtailed earlier in the year.

Montage primarily curtailed liquids-rich volumes from the Ohio Utica, but rising oil and gas prices prompted it to end the curtailments and the company said in July that full-year production would increase as a result.

The company also cut its 2020 capital expenditures forecast in July to $120-140 million from a previously announced range of $130-150 million that was driven by continued efficiency gains.

The company also said well costs of $808/foot are below type curve estimates of $825 per foot in the Utica Dry Gas area.

Average realized prices, including cash-settled derivatives and firm transportation costs, slipped to $1.72/Mcfe in the second quarter from $2.62/Mcfe in the year-ago period.