Seneca Resources Corp. said its Utica Shale well in north-central Pennsylvania in an unproven area more than 100 miles northeast from the formation’s nearest horizontal operator has tested at a 24-hour peak production rate of 22.7 MMcf/d. 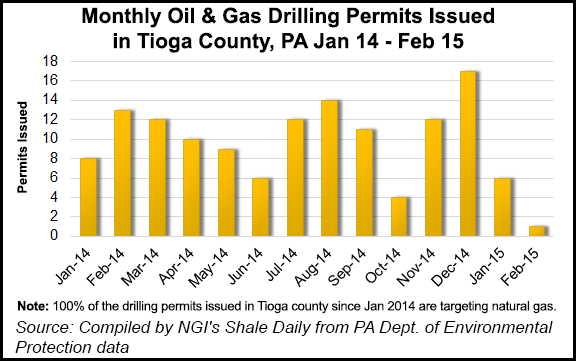 The well is just the latest in the region to flow with encouraging initial results. It was drilled on a tract of state-owned land overseen by the Pennsylvania Department of Conservation and Natural Resources (DCNR) in Tioga County, where Royal Dutch Shell plc announced two successful Utica discovery wells in September (see Shale Daily, Sept. 3, 2014).

Interest was already piqued in the region, where the Utica drops off sharply and sits thousands of feet deeper than the Marcellus Shale (see Shale Daily, Nov. 24, 2014). Seneca, the exploration and production subsidiary of National Fuel Gas Co., said its first Utica well in Tioga County was drilled to a total depth of 12,200 feet with a 4,640-foot lateral completed with more than 30 fracture (frack) stages.

“This well, along with wells drilled by other operators in the area, have de-risked the Utica potential of our 10,000 acres on DCNR Tract 007,” said National Fuel CEO Ronald Tanski about the plot of state-owned where the pad is located. Tanski said the company now estimates the tract’s resource potential at 1 Tcf and added that “our team is evaluating our options to develop this acreage in the next few years, depending on local gas prices and pipeline takeaway capacity.”

Shell’s Gee well had an initial flowback rate of 11.2 MMcf/d, while its Neal well was put online in February 2014 and had a peak flow rate of 26.5 MMcf/d. Both wells were drilled to a total depth of more than 14,000 feet.

Seneca, Tanski said, has plans for another Utica exploration well in its 2016 fiscal year, which begins Oct. 1. The company’s latest results come as operators continue to push the Utica Shale’s boundaries beyond its sweet spot in southeastern Ohio (see Shale Daily, March 26, 2014). Over the last year, operators have successfully tested several wells in West Virginia and southwest Pennsylvania.

Last year, Seneca tested a Utica well in nearby McKean County, PA, to the west of Tioga County, at a peak rate of 8.5 MMcf/d.