In a move that surprised many on Capitol Hill, Senate Republican and Democratic leaders reached a consent deal late Thursday to attach the 10-year, $13 billion energy tax package to a corporate tax cut measure before leaving for their spring recess.

The deal capped off a day of intensive negotiations during which Senate Majority Leader Bill Frist (R-TN) and Minority Leader Tom Daschle (D-SD) agreed to a “finite” list of first-degree amendments to the corporate tax reform bill (S. 1637).

With list in hand, both sides consented to a motion to recommit the corporate tax bill to the Senate Finance Committee and add a substitute amendment that piggybacks the energy tax package to the legislation, and severs it from the troubled comprehensive energy bill (S. 2095).

Observers anticipate that the debate over the corporate tax cut measure could be an extended one since the list of amendments is lengthy — longer than either the GOP or Democrats had wanted.

Frist has signaled that the Senate will take up asbestos liability legislation when it returns from recess next Tuesday, a Capitol Hill aide said. The corporate tax cut bill, formally known as the Foreign Sales Corporation/Extraterritorial Income (FSC/ETI) measure, will probably be next on the agenda, with senators beginning consideration in late April, he noted. The full House has not acted yet on its corporate tax bill.

The agreement between Frist and Daschle last Thursday came a day after Senate Democrats filibustered for the second time GOP efforts to add the energy tax package to the corporate tax bill (see Daily GPI, April 8).

The accord was a “satisfying win” for Sen. Jeff Bingaman of New Mexico, ranking Democrat on the Senate Energy and Natural Resources Committee, said spokesman Bill Wicker. Bingaman “for months has made the case that the best way to achieve results on energy legislation is to break the stalled energy bill into smaller, more manageable pieces that focus on what is most needed and most likely to pass both houses of Congress.” The energy tax package is widely supported by both Senate Republicans and Democrats.

Passing parts of the energy bill, rather than one big broad measure, “seems to be the legislative approach that they’re taking now” in the Senate, the Capitol Hill aide said.

Chairman Pete Domenici (R-NM) of the Senate Energy Committee has been an advocate of comprehensive energy legislation, but last week he dropped his long-held position in favor of plans to strip out the tax portion from the energy measure and move it through the Senate on a separate track ahead of the rest of the legislation.

The $13 billion tax package proposes incentives for the development of an Alaska natural gas pipeline, including a controversial floor price for gas produced in Alaska and transported over the line; a new credit for oil and gas production from marginal wells, accelerated depreciation for gas gathering lines; and expensing of geological and geophysical costs, as well as a number of other initiatives.

Once the energy tax package clears the Senate, Domenici has said he will then turn his efforts to the policy portion of the energy legislation, which includes provisions to enforce electricity reliability standards; mandate the use of more ethanol; offer loan guarantees for the construction of the Alaska gas pipeline; repeal the Public Utility Holding Company Act; encourage clean coal; and enact a host of other proposals.

Â©Copyright 2004 Intelligence Press Inc. All rights reserved. The preceding news report may not be republished or redistributed, in whole or in part, in any form, without prior written consent of Intelligence Press, Inc. 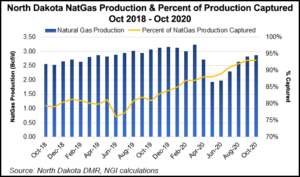