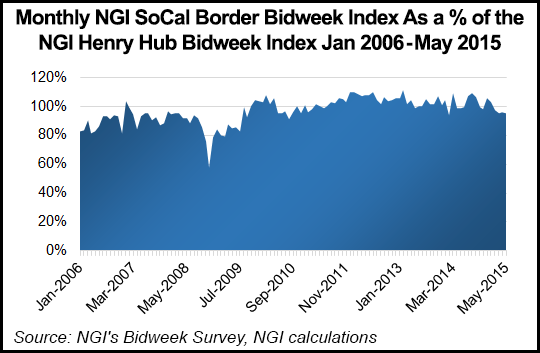 The project carries an $855.5 million price tag with a 2019 target for being in service, and it could eventually influence price differentials among the different receipt points on the SoCalGas transmission system.

The project would provide a second transmission link into the southern end of the state, involving SoCalGas’ affiliated utility, San Diego Gas and Electric Co. (SDG&E). Currently there is only one link between SoCalGas and SDG&E, which provide the gas utility service to most of the southern half of California.

The project is separate from the statewide multi-billion-dollar transmission pipeline enhancement plans that both Sempra’s utilities and Pacific Gas and Electric Co. (PG&E) have been implementing for several years as a requirement of the California Public Utilities Commission (CPUC) following the 2010 PG&E transmission line rupture in San Bruno, CA (see Daily GPI, Dec. 24, 2012; July 10, 2012).

The CPUC has scheduled evidentiary hearings on the north-south project in July, and depending on how long environmental reviews take, the project could be submitted for the regulatory commission’s approval before the end of this year. The utilities are working toward a third quarter 2018 construction start.

With the interconnection of the northern and southern parts of the Sempra utilities’ transmission pipeline system, “customers in the south would no longer be limited to just a receipt point with supplies coming into the state at Blythe; they could access northern receipt points, too,” said Gwen Marelli, SoCalGas director of energy markets and capacity products. That would give the southern customers access to the utility underground storage system that is concentrated in the north.

Each receipt point on the SoCalGas system is priced differently, so the north-south line would open up a wider variety of supply pricing options for customers in the south, Marelli told NGI. Right now the Blythe pricing point tends to be higher than ones to the north (Needles, Kramer Junction and PG&E’s interconnection), so the new link may bring more equity among the different points, she said.

Along with the added pipeline link, the existing Adelanto compressor station, the starting point for the proposed north-south line, will be totally rebuilt in a $193.3 million remodel, increasing its capacity three-fold from 10,000 to 30,000 horsepower. “This is basically a re-build of the station,” said David Bisi, gas transmission planning manager. “Not much of the existing plant is going to be retained at all.”

The replacement engines at Adelanto are the same as the utility is currently installing at its Aliso Canyon underground storage facility about 40 miles north of downtown Los Angeles, said Bisi, noting the new compressors are being installed to upgrade the storage facility’s injection capability.

Adelanto’s equipment has reached the end of its useful life, and it “doesn’t really meet the capabilities that we need to perform in the new station to meet the southern system’s needs,” Bisi said.

SoCalGas officials said it is still early in the permitting process, the proposed route could change and the environmental review still needs to be completed. The utility is working with state and federal fish and wildlife officials as the proposed route cuts through the San Bernardino National Forest. There are seismic factors, too, so part of the ongoing analysis involves examining fault lines along the proposed route.

In making the case for the new pipeline to the CPUC and others, the SoCalGas is stressing reliability, safety and economic benefits, noting that with the closing of the San Onofre Nuclear Generation Station in north San Diego County, new sources of in-state generation will rely on reliable and large volumes of natural gas.