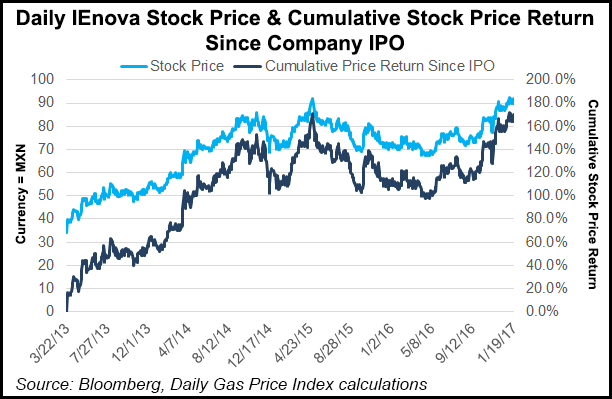 The CEO spoke at the Mexican Stock Exchange. A Sempra spokesperson confirmed the spending plans to NGI.

Ruiz Sacristan emphasized the growth of IEnova, which is in the early stages of securing capital to develop oil and natural gas resources, as well as the infrastructure needed both on and offshore.

IEnova has completed private and public stock sales that raised $1.6 billion to help fund the acquisition of a 50% interest in a group of pipelines and an associated storage terminal from Mexico’s Petroleos Mexicanos (Pemex), he told reporters.

The largest is a $2 billion joint venture announced with TransCanada Corp. last summer to build a gas pipeline from the Texas Gulf Coast to the Mexican Gulf port of Tuxpan. IEnova is in for 25%, or $500 million, for the project, which Ruiz Sacristan described as the most important of the eight undertakings south of the border.

IEnova was launched as a public company almost four years ago and is now among the 15 top corporations in terms of market capitalization listed on the Mexican Stock Exchange, he said. It is also drawing a diversified group of investors, including pension fund manager Mexican AFORES, global funds, infrastructure funds and emerging market funds.

“Today, IEnova is an important resource for the investors to participate directly in the enormous potential that Mexico’s energy sector represents, as well as the important opportunities after the [national] energy reform [is complete],” Ruiz Sacristan said.

IEnova’s success is not only a good sign of the national and international investment communities’ interest in the energy sector, but also their “confidence in the future of Mexico,” he said. In raising $1.6 billion last fall, Sempra executives met with nearly 200 investors in Latin America, Europe, the United States and Mexico.

The latest infusion of investment is nearly three times larger than the original initial public offering in 2013; the level of oversubscription most recently was four times, and the investment proceeds are the sixth-largest in Latin America in the last five years and the largest in Mexico over the past two years.

At the end of 2015, IEnova had almost 650 employees and had invested more than $4 billion in Mexico.