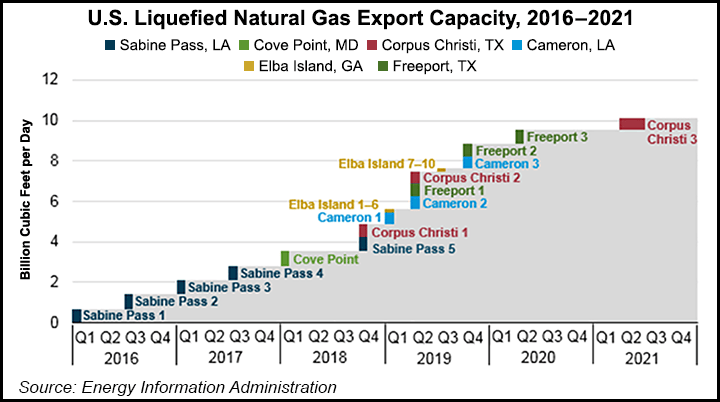 Sempra President Joe Householder and CFO Trevor Mihalik said construction of the 15 million metric ton/year Cameron project is on track to be open partially later this year, despite reported problems with one of the two engineering, procurement and construction (EPC) contractors, Chiyoda International Corp., which is building the facility with Chicago Bridge & Iron Co. NV.

“The partnership has been very engaged with the EPC about what is expected in delivering the project, and we have confidence they are going to deliver the goods,” Martin said. Householder called the onsite contractors “relentlessly focused” on delivering the first of three production trains in the 2Q2019.

“We expect to produce LNG, stabilize production and complete performance testing in the second quarter,” Householder said. “We expect to receive earnings by mid-2019.” The second train is expected by the end of the year, with the third one in 1Q2020.

Asked what Sempra’s outlook was for two other export projects that await a final investment decision, Port Arthur LNG LLC in Jefferson County near Houston, and the Energia Costa Azul (ECA) facility to be sited on the Pacific Coast of Baja California in Mexico, Martin said he was “more bullish than I was four months ago.”

He and Householder are planning an overseas trip in March to talk with potential LNG buyers.

Cameron is a tolling facility, which allows Sempra to avoid upstream and downstream risks. The “number and type of counterparties has expanded, so the oil and gas companies in a place like Poland expect someone at the terminal to go upstream and source the gas, and as long as we can do that without taking the commodity risk, we’re certainly comfortable with the transportation of the gas,” Martin said.

Sempra, he said, has a competitive advantage because two of its three potential additional LNG projects are brownfield sites, and ECA is on the West Coast, “a huge advantage that we intend to market aggressively.”

A day after launching a formal process to begin selling utility assets in Peru and Chile, CEO Jeff Martin and Mihalik said North American renewable (solar and wind) and gas storage sales are moving ahead. Buyers for the South American assets are expected by mid-year, with sales set for completion by the end of 2019.

“We expect our renewables and midstream gas divestitures to result in more than $2.5 billion in proceeds that can be used to pay down debt and re-deploy capital for growth,” Martin said.