Energy infrastructure holding company Sempra Energy wants its California and Texas utilities to achieve net-zero emissions by 2045, but they need some help from technology innovations and regulators, executives said. 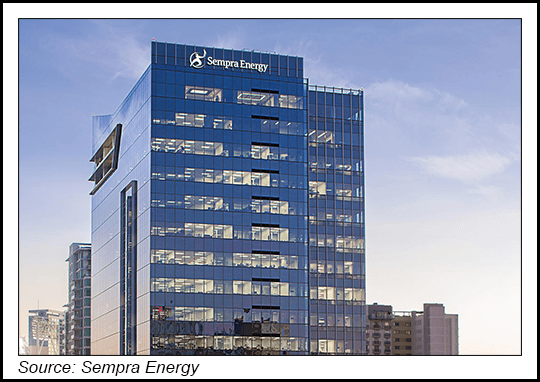 A key for California utilities, including Southern California Gas Co. (SoCalGas), is developing renewable natural gas (RNG) as a decarbonizing tool, CEO Jeff Martin said during a 1Q2021 earnings conference call. SoCalGas is nearing the milestone of 5% RNG in its distribution system.

Martin said Sempra is advocating for the equivalent of a renewable portfolio standard (RPS) to develop RNG. Using RNG in the marine and on-road transportation sectors will earn renewable energy credits for the operators, he said.

“We’re well on our way to meeting the 5% goal for RNG,” said Group President Kevin Sagara. “The larger commitment of 20% by 2030 will require some kind of regulatory construct, something like an RPS standard perhaps, but this is an issue we will have to tackle.”

Martin told analysts the California utilities have “benefitted from positive state regulation,” while electrification is likely a long-term trend. At the same time, there is a “growing convergence” around gas and electric infrastructure as critical to decarbonization.

“Over a long-term period of time to continue to push for cleaner forms of energy, natural gas has a role, and we’re still using a lot of natural gas in power production,” said Martin.

Sagara said the industrial and transportation sectors cannot be made carbon-neutral without natural gas. “There is really a need for the electric and gas systems working together to achieve the net-zero emissions by 2045,” he said.

Martin said Sempra is now projecting to have $55 billion in utility rate base by the end of 2025 among SoCalGas, San Diego Gas and Electric Co. and the Texas electric transmission assets in Oncor Electric Delivery Co. LLC. The mix is “going to continue to be weighted toward utilities,” he said.

Long term, the strategy is to expand the gas and electric transmission/distribution systems over the next 20-30 years.

”When you think about renewables essentially doubling over that time period nationwide, we think a grid position will be very important,” Martin said.

Oncor should continue “to play a key role” in meeting Texas’ growing energy needs through 2025. Oncor during the quarter connected 19,000 new premises, compared with 18,000 in the first quarter of 2020.