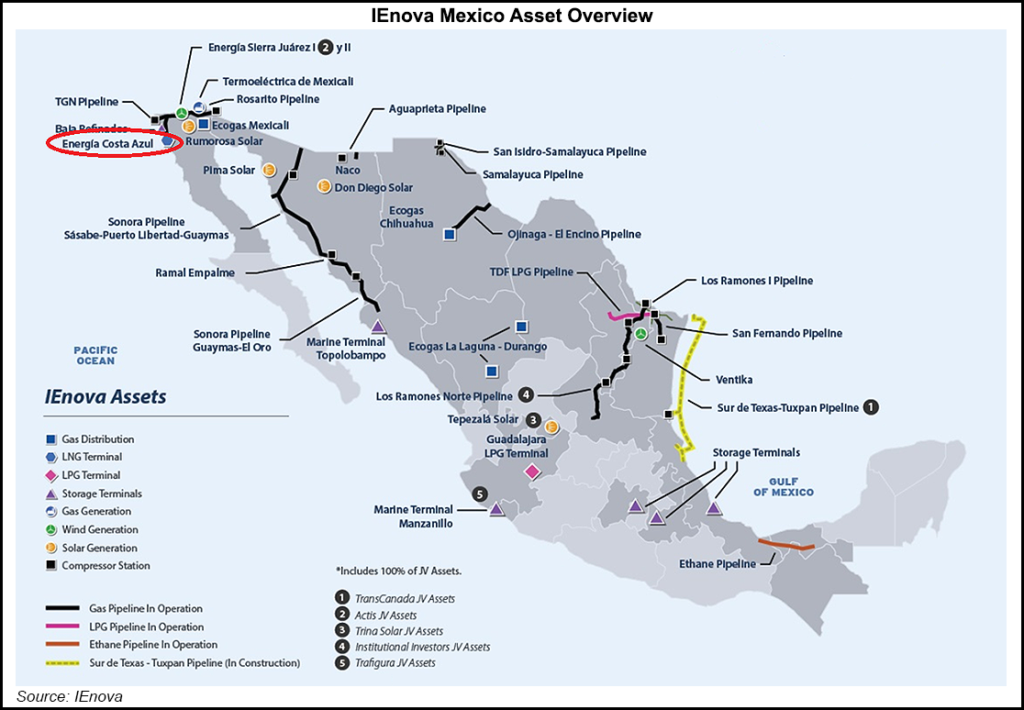 The authorizations allow Sempra “to export U.S. produced natural gas to Mexico and to re-export liquefied natural gas (LNG) to countries that do not have a free-trade agreement (non-FTA) with the U.S., from its Phase 1 and Phase 2 liquefaction export facilities in development in Baja California, Mexico,” Sempra said Friday.

The two-phase ECA liquefaction project, a joint-venture between Sempra LNG and Infraestructura Energética Nova (IEnova), will be built adjacent to Sempra’s existing ECA LNG receipt terminal near the city of Ensenada. IEnova is Sempra’s Mexico subsidiary.

“ECA LNG will source natural gas from some of the fastest-growing production regions in the U.S. and provide our customers with a competitive advantage in accessing world markets, especially Asia,” said Sempra CEO Joseph A. Householder.

The approval comes amid a historic natural gas supply glut in the Permian basin of West Texas and Southeastern New Mexico driven by soaring production and insufficient takeaway capacity. The trend has driven spot natural gas prices in West Texas into the negatives in recent days.

“The timing of these approvals is great news as we meet with customers and partners this week in Shanghai,” Sempra CEO Joseph A. Householder said Friday.

IEnova CEO Tania Ortiz said that a final investment decision for the ECA Phase 1 is expected this year. Sempra announced last November that it had signed heads of agreements with affiliates of Total S.A., Mitsui & Co., Ltd., and Tokyo Gas Co., Ltd. for the entirety of ECA Phase 1’s capacity.

ECA Phase 2 would include the addition of two trains and one LNG storage tank, and would have an offtake capacity of roughly 12 mmty. Sempra signed a memorandum of understanding in November 2018 with Total for the offtake of up to 4 mmty from ECA Phase 2.

The export authorizations follows similar DOE approvals for Mexico Pacific Limited, LLC (MPL), which is developing a liquefaction project on the Gulf of California in Mexico’s Sonora state.

MPL is permitted for up to 12 mmty of LNG liquefaction capacity at the site, with initial construction of up to 4 mmty using modular LNG technology.

President Josh Loftus added, “We are pleased to receive the ongoing regulatory support of the U.S. and Mexican governments as we build momentum towards taking a final investment decision in the first half of 2020 and start up in the second half of 2023.”