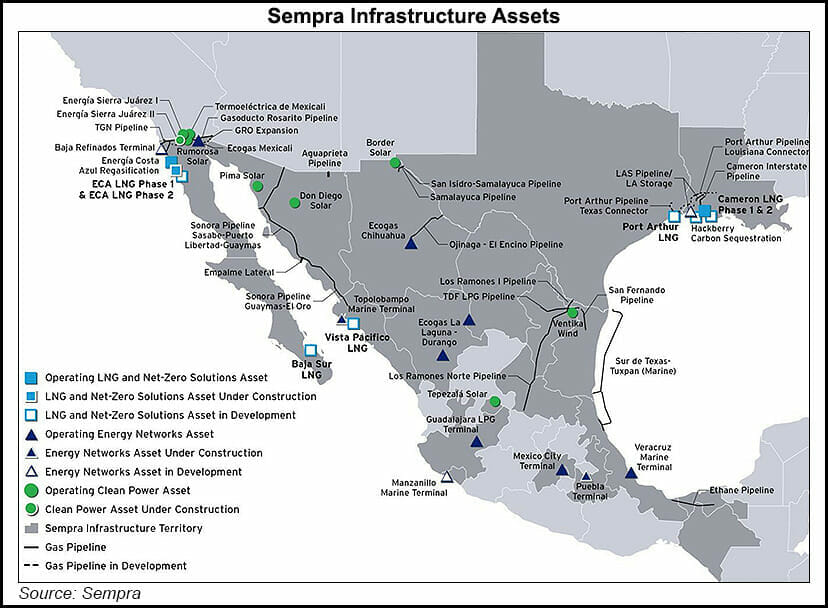 Sempra said the non-binding agreement paves the way for it to negotiate 20-year deals to supply PGNiG with 2 mmty from the Cameron LNG Phase 2 expansion under development in Louisiana and 1 mmty from the proposed Port Arthur LNG facility in Southeast Texas. Sempra has not reached a final investment decision on either project.

The agreement also provides PGNiG the opportunity to reallocate volumes from the Cameron expansion to the Port Arthur project. Sempra added that both companies would continue to work on a plan to reduce, mitigate and report greenhouse gas (GHG) emissions across the LNG value chain, building on a memorandum of understanding (MOU) signed last year.

PGNiG last year canceled a sale and purchase agreement (SPA) to buy 2 mmty from Port Arthur due to delays in sanctioning the project. It instead signed an MOU to transition the Port Arthur SPA to Sempra’s North American portfolio and advance GHG reporting. PGNiG announced a deal at the same time to buy 2 mmty from Venture Global LNG Inc.’s Calcasieu Pass and Plaquemines LNG terminals under development in Louisiana.

PGNiG is Poland’s main gas buyer. The country’s work to cut its reliance on Russian natural gas supplies in recent years has become more imperative. Last month, Gazprom PJSC halted deliveries to the country in response to its refusal to comply with Russia’s requirements for paying for the fuel. Poland has expanded its relationships with pipeline suppliers and LNG exporters, particularly those in Norway, Qatar and the United States.

“Here in Poland, LNG is already one of the cornerstones of our diversified strategy to enhance Polish energy security, as well as to strengthen the commercial potential of the PGNiG Group,” said PGNiG SA President Iwona Waksmundzka-Olejniczak. “We are determined to further expand our operations in this direction and are therefore taking steps to secure access to adequate natural gas volumes in the future.”

Global contracting for long-term LNG supplies has rapidly accelerated this year as volatility has spread throughout energy markets. Wood Mackenzie said in a report released Monday that buyers have signed contracts to secure 10 mmty of LNG.

The consultancy noted that Chinese buyers have largely dominated the market, accounting for 8 mmty of this year’s sale and purchase agreements, most of which will come from U.S. suppliers.

“The Russian invasion of Ukraine has had a dramatic impact on long-term LNG contracts. Many traditional LNG buyers will neither procure spot gas or LNG, nor renew or sign additional LNG contracts with Russian sellers,” said Wood Mackenzie principal analyst Daniel Toleman. “Spot prices have also been high and volatile, pushing many buyers towards long-term contracts.”

The Cameron expansion project would add another 6.75 mmty liquefaction train, boosting the facility’s capacity to 18.75 mmty. Port Arthur would include two trains with the capacity to produce 13.5 mmty of LNG.