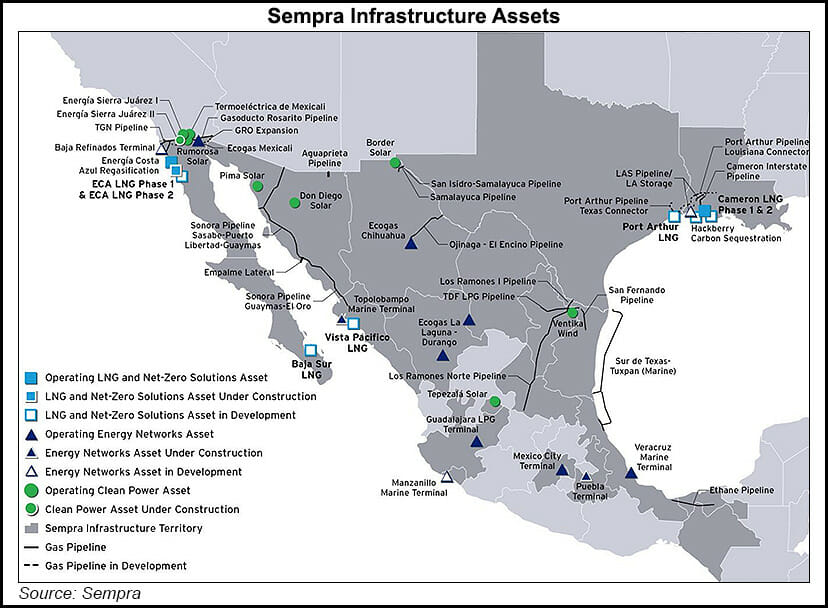 “In the first half of this year, the United States became the No. 1 global exporter of liquefied natural gas, and by the end of the decade, we expect the United States will extend its significant leadership advantage in this area,” Martin said in an earnings call.

He said the country’s leadership role would support Sempra’s $36 billion capital plan through the next four years. However, the momentum of rocketing commodity prices and the global thirst for more LNG wasn’t going to change Sempra’s disciplined pace.

Sempra’s LNG activity was also busy in Mexico in the second quarter. Martin said he had met with President Andrés Manuel López Obrador over the quarter, with conversations focusing on plans for LNG and other energy infrastructure expansion projects.

As a part of a laundry list of agreements with Mexico’s state utility Comisión Federal de Electricidad (CFE), Sempra recently added a potential LNG terminal in Salina Cruz, Oaxaca, to its possible projects.

“That facility would also be very similar to Vista Pacífico and ECA Phase 1,” Martin said. “Both provide a unique geographical access point to Asian markets with on-sea transfers taking about 11 days to reach the marketplace.”

While the project is still in “a very early stage,” Martin said, Sempra is positioned to “work with various administrations in Mexico because our baseline approach is to make sure we put dollars down in the country.”

The agreement also could provide “a path forward” for Sempra’s unsanctioned Vista Pacífico LNG terminal project at Topolobampo in Sinaloa State. Under the agreement, the parties agreed to define the “project’s configuration” to advance engineering and permitting.

Trevor Mihalik, CFO, said Sempra would have more news on key projects later in the fall, but the financing and contracting teams are making progress on the proposed Port Arthur LNG terminal southeast of Houston and an expansion of Cameron LNG in Louisiana.

“Our job is to make sure that we risk adjust these projects and put those cash flows in the box so it looks substantially similar to our utility cash flows,” Mihalik said.

The company has disclosed tentative agreements with U.S. and European clients for 9.65-11.65 million metric tons/year (mmty) of offtake from Port Arthur LNG. An initial permitted phase calls for 10 mmty of capacity, with a 5-10 mmty expansion currently making its way through the regulatory process. During the second quarter, Sempra announced tentative agreements with the UK’s Ineos Group Ltd and German utility RWE AG. It also secured a 30% equity stake with ConocoPhillips.

After multiple delays of the final investment decision (FID), management said Port Arthur LNG was now in the process of a refresh for its engineering and procurement contract with Bechtel Corp.

Sempra also has been working to finalize several tentative contracts for the 6.75 mmty expansion of Cameron LNG into sales and purchase agreements. The company awarded two front-end engineering design contracts for Cameron’s fourth train in April.

“Obviously, if that goes forward, it moves carbon from $50/metric ton to $85/metric ton, which certainly improves the economics,” Martin said. However, the bill wouldn’t influence Sempra’s FID for HCS as the project is “about making Cameron more competitive” as an exporter of responsibly sourced LNG, Martin said.

Management told investors the bill wasn’t a deal maker or breaker for the long-term agenda because of its already strong position in progressing its infrastructure and growth targets.

“We looked at the outcomes against our $36 billion capital program and, whether the bill goes forward or it doesn’t go forward, we don’t see it having a material impact either way,” Martin said.

SDG&E is progressing four microgrid projects in its Southern California service area after receiving regulatory approval in June. The projects would use local power generation, energy storage and automated switching to help improve stability in remote regions and support the larger grid during outages and capacity shortfalls.

In Texas, Sempra’s Oncor Electric Delivery Co. LLC utility saw continued high connection demand for another multi-record breaking quarter. June broke its record for most interconnection requests from new housing subdivisions with 110 neighborhoods. In all of 2Q2022, it saw a 73% increase in new transmission requests versus the same period last year and placed around $239 million worth of new transmission projects into service.