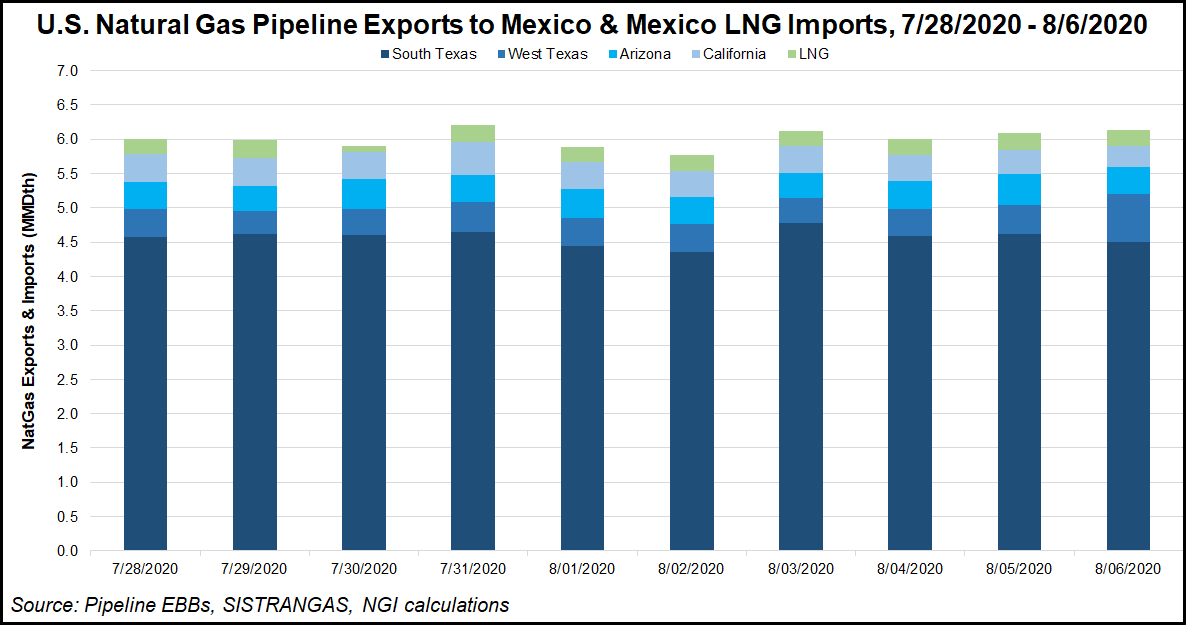 CEO Jeff Martin acknowledged during the second quarter call to discuss results that the permit process had taken longer than expected but it’s by a private sector company, making it “a novel request. Traditionally state-owned enterprises had the domain and responsibility for the export of hydrocarbons. This would be the first permit that they’ve issued” to a private sector company.

He said “the government has largely been shut down because of the pandemic” and that “despite the extenuating circumstances the conversations remain quite positive, and I’m optimistic that we’ll get the permit later in the third quarter.”

Executives did not provide a timeline for a final investment decision, however. The development cost was set earlier this year at $1.9 billion.

The proposed two-phase ECA liquefaction project, a joint venture between Sempra subsidiaries Infraestructura Energética Nova (IEnova) and Sempra LNG, would be built adjacent to the existing ECA LNG receipt terminal near the city of Ensenada.

“There certainly has been some disruption in terms of how the Morena party has been administering the government and its approach to energy generally,” Martin said, referring to Mexican President Andrés Manuel López Obrador’s ruling coalition party. Martin said he “had the good fortune of going to dinner with President López Obrador and President Trump two weeks ago, and there is true warmth and authenticity in that relationship.”

The ECA project, the first of its kind in the country, would import U.S. gas as feedstock with a $400 million pipeline on the Mexico side of the border. Last year, ECA received U.S. Department of Energy authorizations to export U.S.-produced gas to Mexico and then re-export it globally. The target market is East Asia.

An engineering, procurement, and construction agreement with TechnipFMC plc is in place and the Mexico export permit is the only missing piece. Executives also said during the call that force majeure claims from customers at the current import facility are “meritless” and would not impact the LNG export project.

With phase one of the Cameron, LA, LNG export project now complete, executives spoke bullishly about the future for natural gas, as well as the prospects for hydrogen, during the call.

In response to concerns and questions on the resiliency of the global LNG market, Martin said it was best to look at the macro level and the mild winter this year in the Northern Hemisphere, as well as the pandemic’s impact on demand.

The International Energy Agency, he noted, “is predicting gas demand globally will decline this year by 4%, but the picture inside the LNG sector has demand increasing.

“Local demand for LNG over the first half of the year is one of the few commodities that is actually up close to 2%. U.S. LNG exports compared to last year are up 7%, and that’s a function of all the new capacity that has come online over the last 12-18 months, including Cameron. Interestingly, Europe is up 18% in the first half.”

Martin said there is “clearly an opportunity where LNG is quite competitive in many countries, where LNG is indigenous, such as Thailand. There, they are landing LNG twice as cheaply as they can produce it in their own economy. So I think there is continued optimism about LNG.”

Sempra LNG CEO Justin Bird during the conference call said the company’s team “continues to believe that the second wave of demand in the mid-2020s is a real opportunity.”

Roughly 80% of future gas demand is expected in the developing world, defined by the Asia-Pacific, Martin noted.

“There’s a big opportunity there, and I think the pandemic, if anything, is causing some LNG buyers to delay their decisions. It is also causing other infrastructure providers to fall behind on the wayside..

“It always comes back to what your competitive advantages are, and our approach has always been having competing, low-cost brownfield sites that can dispatch directly into the Pacific and the Atlantic. No other infrastructure provider in North America has that advantage.”

Bird said LNG supply has had an 8% growth rate, but Sempra expects it to “dramatically slow down to 1% annually…We think the supply growth will decrease as demand increases.”

Sempra is targeting 2021 to move forward on the Port Arthur LNG export project on the Houston Ship Channel. Management is talking with “many” shippers, but “there is no doubt that there has been a slowdown in the market as a result of Covid-19,” Bird said.

For the second phase at Cameron, Bird’s team is working with partners on conceptual work to optimize the expansion from a cost basis and timing perspective. “We continue to see long-term growth in the LNG business, but with a very disciplined capital approach.”

Longer term, hydrogen as a fuel is at a high-level of interest, Martin noted. Sempra is looking at up to 10 different projects that involve using hydrogen in transportation, blending opportunities in power generation, blending in compressor stations at the Southern California Gas Co. utility and injecting cost-savings and efficiency in existing facilities, such as LNG projects.

Sempra is “quite bullish on hydrogen and renewable natural gas, particularly here in California,” Martin said. “For the energy transition that is facing our sector and globally, hydrogen is going to play an increasingly important role. It is still a little bit early, but it is time now for us to establish a leadership position.”

Group President Kevin Sagara, who was CEO of Sempra’s other California utility San Diego Gas and Electric Co., also talked up hydrogen prospects. The company, he said, has an edge in California, which “has always led the way in clean energy…In this regard, I expect it will be no different. We see opportunities in our own system” for industry and transportation in which hydrogen could “play a key role, and we would expect our infrastructure to be right in the middle of it.”

Regarding the economics for commercial-scale hydrogen, Martin cited the commercial viability trendline for solar photovoltaics and predicted the same cost reductions would happen to hydrogen. “A lot will depend on what advances on the research and development side…to costs in the forward curve.”

Christopher Lenton contributed to this story.