Sempra has officially filed an amendment with FERC to change the scope of its Cameron liquefied natural gas (LNG) expansion project in Hackberry, Louisiana. 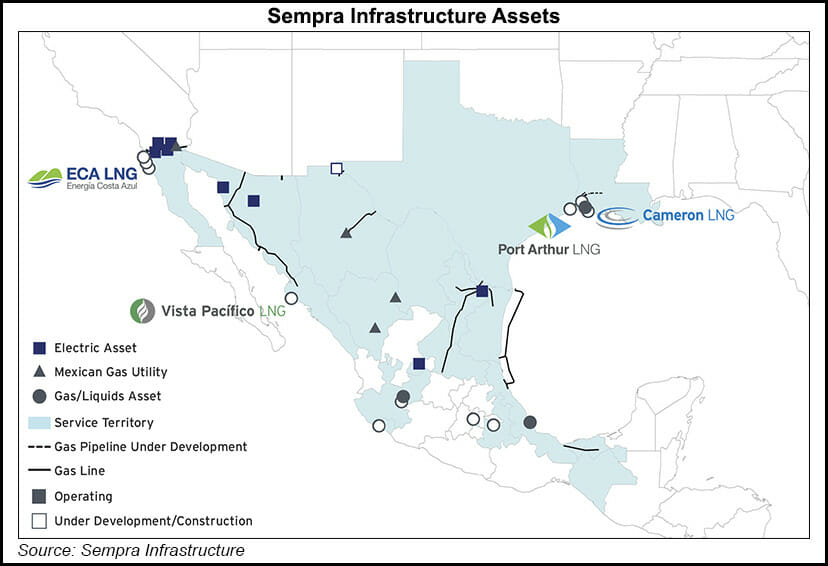 The newly filed amendment, No. CP22-41, with the Federal Energy Regulatory Commission makes good on plans executives with Sempra – formally Sempra Energy– have been outlining since last summer.

In a June investors call, it was suggested the scope of Sempra’s 9.97 million metric tons per year (mmty) addition to capacity at Cameron would likely be reduced.

Instead of two additional liquefaction trains joining the three already in service, the California-based energy infrastructure company has decided only to move ahead with a new version of Train 4 capable of 6.75 mmty of super-chilled gas with fewer emissions.

“We believe these changes will allow us to build a cost-effective and more efficient facility, while also advancing new technological solutions that will lower greenhouse gas emissions,” a spokesperson told NGI.

Engineers with Sempra said the inclusion of an electric drive motor to replace gas turbine drives and infrastructure to allow future carbon sequestration will improve performance of its newest train. Estimates peg carbon reduction from the design changes at 44% compared to the previously authorized project scope, according to the company.

The new design also reduces the overall capacity of Cameron LNG by 3.22 mmty, to around 21.7 mmty if the expansion is completed.

Suppliers like Sempra have been under increasing pressure from customers to reduce emissions during liquefaction\ also across the entire value chain.

According to a Sempra spokesperson, the company is estimating that power grid emissions associated with powering the project will be 13% lower based on the current regional fuel mix, and further improvements are expected in the future.

After shuffling priorities for final investment decisions (FID) in 2021 to prioritize Energía Costa Azul in Mexico, an FID for the Cameron LNG expansion could likely come around the same time Sempra has targeted a decision for its other Gulf Coast project located in Texas.

Polish Oil and Gas Co., aka PGNiG, changed a 20-year sales and purchase agreement for 2 mmty of LNG from Port Arthur LNG in the Sabine Pass community of Port Arthur, TX, for gas in other parts of Sempra’s North American portfolio after the company moved its FID to sometime late this year.

“We have previously indicated an intention to take FID for Cameron expansion around the end of 2022,” a spokesperson with Sempra said.